Well over 200 eggs have been laid and 46 chicks are alive in the largest kākāpō breeding season on record. It is also the earliest and longest breeding season, and the Kākāpō Recovery Team at the Department of Conservation says the end is not yet in sight. 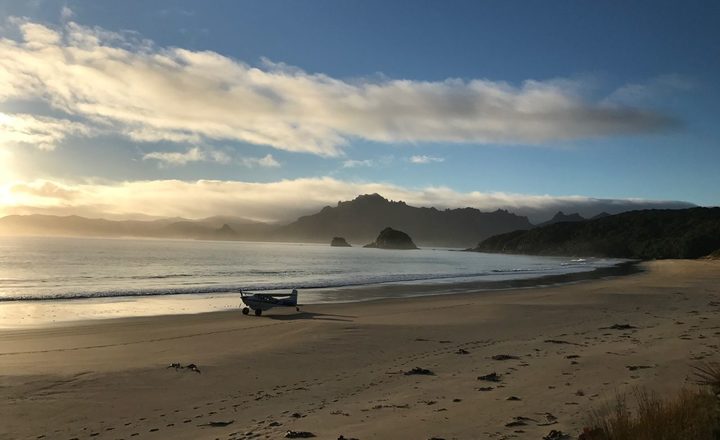 JEM the Cessna has been ferrying passengers and equipment to and from Whenua Hou / Codfish Island for 26 years. Stewart Island's Ruggedy Range is in the background. Photo: Andrew Digby / DOC

In this episode of the Kākāpō Files we chat with some of the busy island rangers, and discover that their jobs are numerous and varied.

The logistics of moving teams of people to and from remote islands includes booking helicopter and fixed wing flights, and walking the beach runway on Whenua Hou to mark out the safest landing route.

Keeping everyone well fed involves ordering hundreds of kilos of fresh food each week. Bulk dried and tinned goods, along with diesel for the generator and coal for the fire were delivered in a bulk supply run before the breeding season began.

Rangers oversee the delivery of supplementary food to breeding birds, carry gear and set up tents and electronic equipment at kākāpō nests, collect information about all the birds and enter it in the database.

While some rangers work at nests at night to candle eggs for fertility, or foster chicks to kākāpō mums, one ranger – the nest controller – remains at the hut to oversee all the information gathered by surveillance equipment deployed at most nests. This information is all relayed through a specially developed piece of software known as the Train Station.

The latest news on eggs and chicks

Mating continues and eggs continue to be laid.

Ninety six eggs are fertile and 48 chicks have hatched to date. This is one more than the previous best of 47, set in 2016. Two chicks have died, and a further two chicks died during hatching.

There are 46 chicks alive, being hand-raised in four different locations: Dunedin Wildlife Hospital, a special rearing unit in Invercargill, and on Anchor Island and Whenua Hou.

Growing numbers of chicks are being fostered to wild kākāpō mothers.