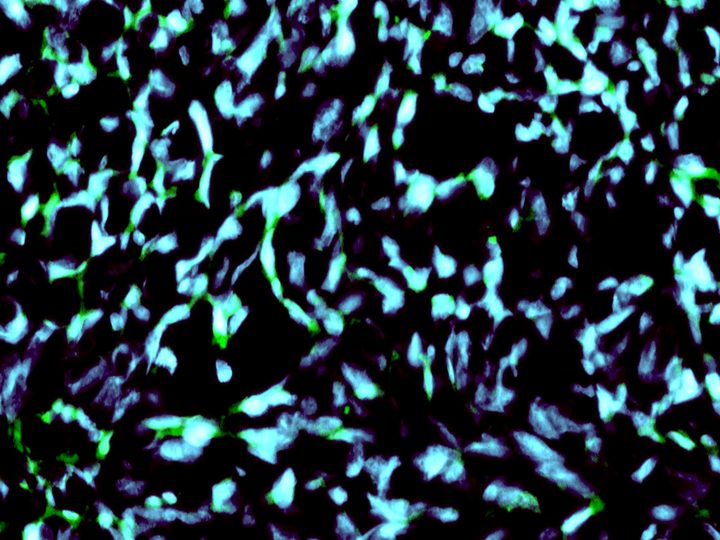 In Sickness and in Health – Episode 2

Once your cancer has been properly diagnosed and you’ve been scanned and measured for the treatment, the strangest things start to happen to you.

Tattooing for a start. Permanently so, what’s more, with X marks to ensure the radiation beams hit the exact spot. Aimed wrongly they’d be messy.

I’d always wanted a tattoo but had enjoyed no encouragement from my family at all. So here was my big chance. 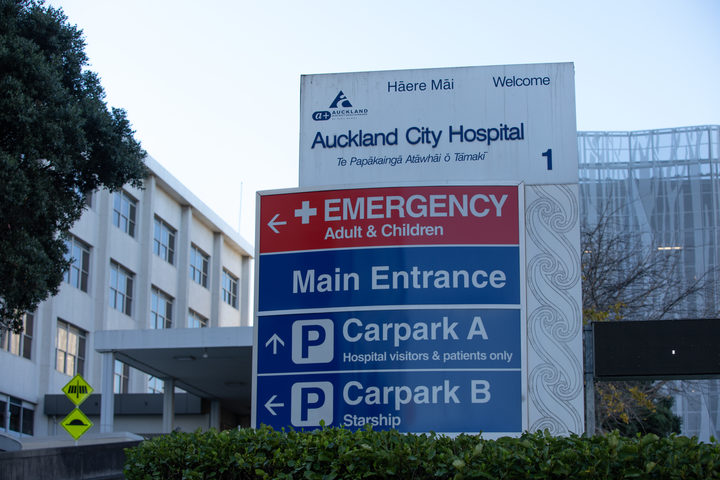 I set off to join the crowd that flows into Auckland Hospital’s Cancer and Blood Services building each day and eventually was ushered into the presence of a needle-wielding therapist ready to ink in the X, very exactly. It didn’t hurt much so I asked whether he couldn’t just keep going and add a dragon or a butterfly while he was at it.

“If you’d seen the dragons I draw you wouldn’t be asking,” he replied.

I left disappointed, unable to show off the little tattoo because of its rather private location, but still feeling just a bit special for other reasons. Because in the most overcrowded corner of this hopelessly overcrowded city I was issued with a permit that lets you park free at the door, a privilege usually reserved for brain surgeons and DHB bosses. The pleasure this permit provided and the stress it saves already anxious cancer patients was pure gold.

Once inside the building, your special status holds up in a waiting room the size of a rugby field. It’s full of people facing all sorts of treatment: some obviously very unwell, wheelchair bound; a few confined to beds and wheeled in; others appearing normal, as though they’d just dropped in from a walk in the park. As many do. 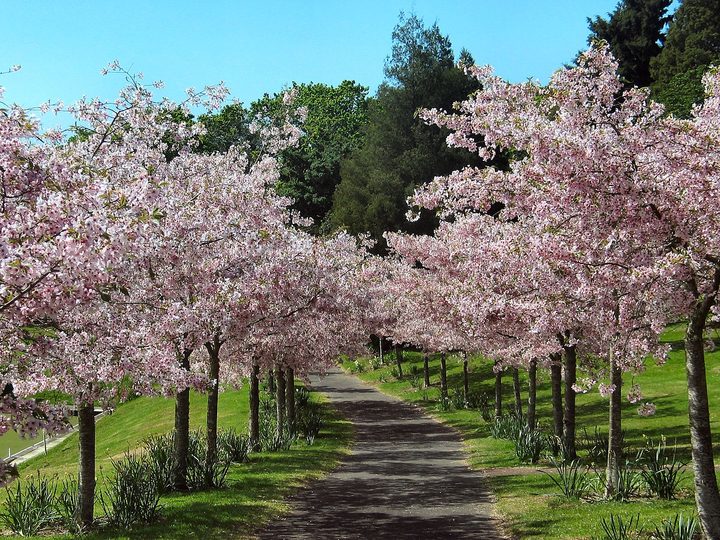 Thank God Auckland is blessed with a vast green domain on the edge of its cancer treatment and accommodation centre. There’s an awful lot of people sitting around and waiting to be seen and treated and seen again, with time on their hands. You couldn’t want for a more beautiful setting to hang around in.

We haven’t got a cost-accounting system that can put a price on the healing benefits of surrounding sick people with beautiful things and lovely settings, to say nothing of sound and gracious buildings. The cost would run into the hundreds of millions, as the managers at nearby Middlemore Hospital know only too well.

And while there’s not a lot of talking going on in the waiting room – subdued would be the mood – something powerful binds this collection of strangers. 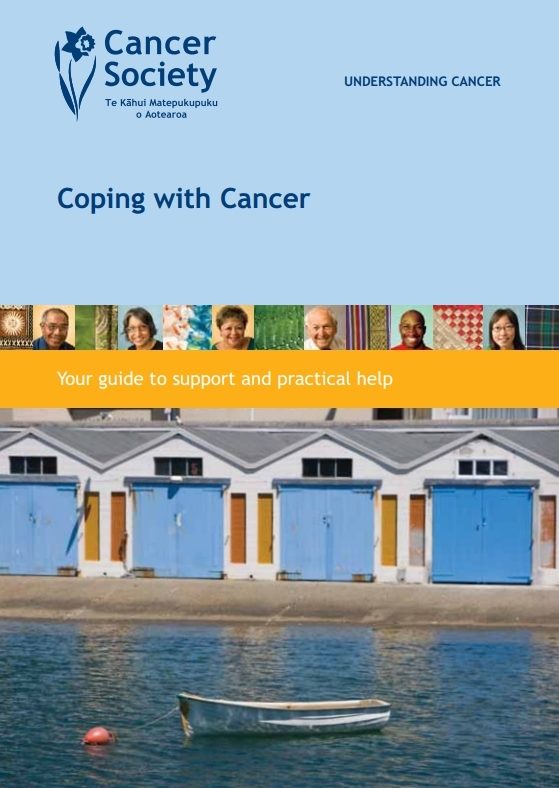 All those who enter here have joined an exclusive club. Members are bound by a hunger to survive this invisible disease, and a willingness to submit their bodies to these equally invisible and utterly mysterious bursts of energy, known as ionizing radiation.

Most of us know nothing about it, except for the pamphlets that try hard to be helpful. “We are aware this is a new experience for you,” they tell us, rather unnecessarily.

Produced by the health board and the Cancer Society, the brochures warn very generally about side effects, but very precisely and graphically about how to prepare your bowel and bladder for the treatment. You don’t want to read this stuff before you go to sleep at night.

It’s radiation that we’re lining up for here, (chemotherapy is a whole other story), waiting to be called downstairs to one of seven treatment rooms, innocuously labelled MV1 to MV7.

And when your name is called finally, loud and clear but happily not over a microphone, you head down the gangway to the good ship MV2, helped along by a cheery wave from the oncology nurses’ station on the way to the treatment unit. 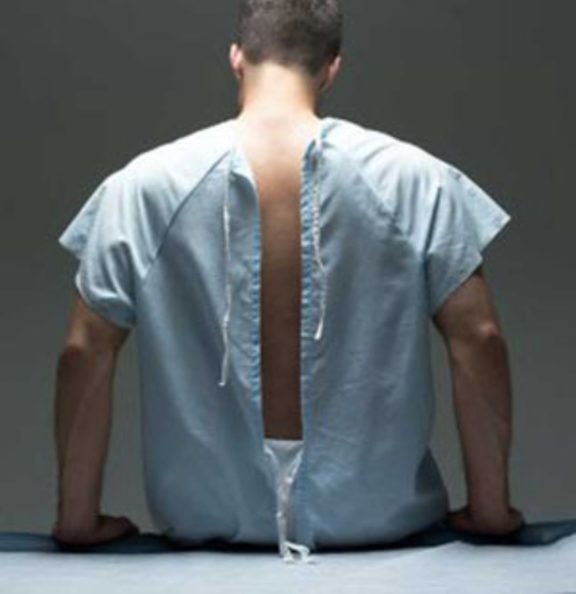 You change into a hospital gown which has to rank with the silliest and most awkward garments ever invented. The clothes you take off are carried with you in a plastic shopping basket, refugee style, as you head off down the corridor, not to a detention centre, but to lie under a big machine.

Anonymity sets in, and personal touches don’t survive here. On the ceiling of the treatment room, someone had fixed a poster of palm trees on a Pacific beach.

“Nice idea,” I commented, “ but why not put it above the patient’s head rather than off in a corner?”

“That’s because the roof above you is heavily shielded with lead sheets to contain the radiation,” came the sobering reply.

They play for keeps down here, which got me thinking about the green line you follow down the endless corridors that connect one part of the oncology centre to another. That movie with Tom Hanks about Death Row called the Green Mile kept jumping around in my head. Why not a yellow line instead, with polka dots? 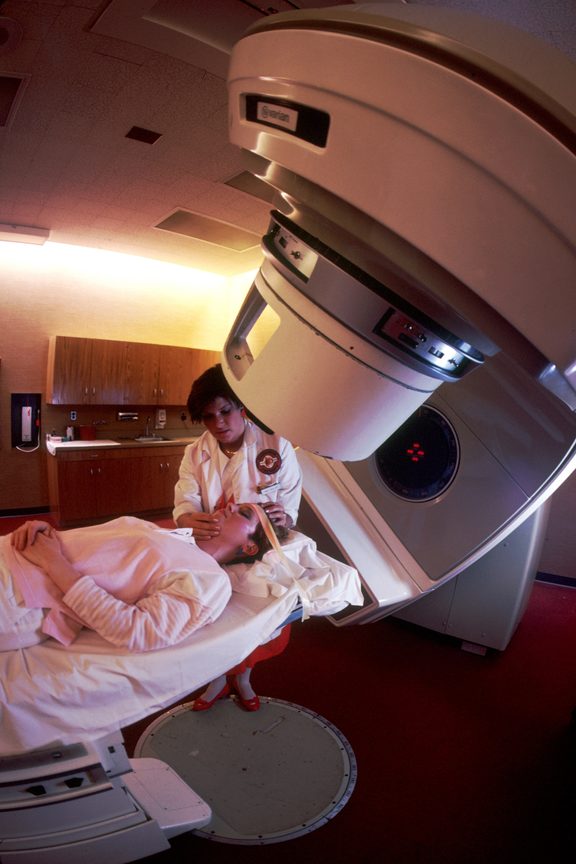 The journey continues with the radiation therapists in blue uniforms who interrogate you cheerfully about the state of your internal organs. It was a startling experience to be briskly interrogated about such intimate matters by young women who I’d only ever say “hello” to in any other part of your life.

But that’s the therapist’s job, to ensure everything inside you is in the best state and the right place to receive the radiation beams. Alignment is everything here and all you can do is remain utterly, absolutely still on the table.

Machine matched with body, not sure about the soul, tattooed markers lined up with the coordinates – they read them out like a pilot on a bombing raid. Black and white images from inside the Lancaster on the Dam Busters Raid flash through my mind. You breathe in through your nose and hope the stars above are aligned as well.

The therapists position you horizontally very precisely on a hard table; nudge, nudge and firm shove, and then desert the room. And there you lie alone for 15 to 20 minutes, without moving, while a giant machine with radiating arms slowly rotates around your body. The sounds it makes – buzzing, whirring, clanking, are all part of the unearthly atmosphere. It could all belong to another film set from Dr No.

I tried all sorts of things to think about over those 40 treatments. I played jazz scales in my head, planned garden projects, menus, speeches, letters I needed to write and had never found the courage to, fishing trips I needed to make. But finally it was easier to think about nothing at all.

Then the sound effects fade and it’s all over as quickly as it began.

The staff romp in ever cheerful, sit you up and send you off. You pass the next patient waiting at the door but finding something suitable to say is hard, let alone something funny.