Great Ideas is a series, recorded in collaboration with Victoria University, about the ideas that have changed the world. It looks at what it takes to change our perspective and considers why these ideas still matter. 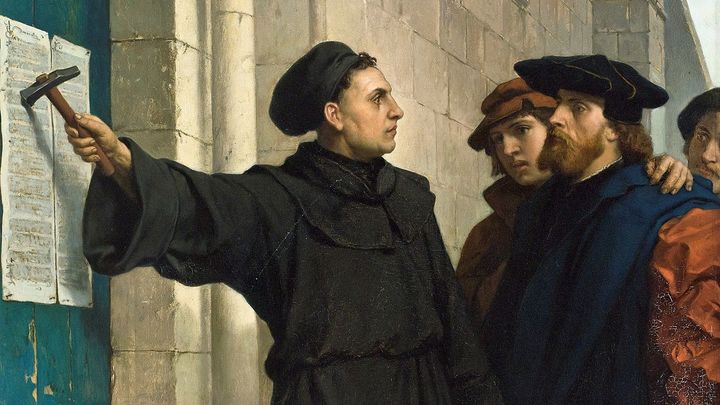 2017 marks the 500th anniversary of the publication of Martin Luther’s 95 Theses, which most people think marks the start of the Protestant Reformation.

Luther’s theses initiated a series a series of radical changes, first in the church, and later in society. The changes revolved around forms of authority and social relationships, and impacted much of the world.

“But I think one thing that’s important to remember is the massive effect was belated, and in some ways unintended,” says Dr Woodard-Lehman.

“Luther began as just an ordinary Augustinian monk who thought a couple of things weren’t quite right with his community and its practices, and made what initially were rather humble and modest suggestions.

“But because of the way they were responded to, the reaction that they elicited, they wound up being revolutionary.

“There’s this curious and contentious intersection between the religious and the political,” says Dr Woodard-Lehman.

“So on the one hand, Luther is undertaking these reforms in his own Christian life… and at the same time in the political realm, there’s a growing disease between the holy Roman Empire and the papacy and the local principalities.

“The debate about the role of tradition, the teaching of the church, the question of the bible, is a really important one; it’s critical in Protestantism,” says Dr Geoff Troughton.

The idea of trusting the bible over the authority of the church is a big step, he says.

“It’s a tremendously powerful affirmation of individual conscience, that flows off into much of what we think about as the grounds of modernity.

“Depending on how you want to tell the story,” says Dr Woodard-Lehman, “either the reformation idea of the ‘priest of all believers’ either runs alongside, or even runs ahead of, the democratic idea of ‘one person one vote."

The Reformation also played a role in the modern notion of equality - if someone was equal in the eyes of God, shouldn’t that mean they were equal elsewhere?

“In later contexts we run into the same problem in the United States with chattel slavery, says Dr Woodard-Lehman.

“Slave-holding religionists were very clear that baptising a slave did not change their political status. Of course, the religion of the slaves was very clear of the opposite.”

“You can talk about an arc of the development of freedom that nicely runs from Martin Luther to Martin Luther King,” says Dr Woodard-Lehman.”

These are big ideas, and have rather moved on from Luther’s time when order and safety were somewhat more important than equality and freedom.