Bismuth is a ‘good’ heavy metal with some unusual features.

It is a by-product of lead ore that’s right at home in our bathroom cabinets.

Professor Allan Blackman from AUT gives us the low-down on bismuth, symbol Bi and atomic number 83. 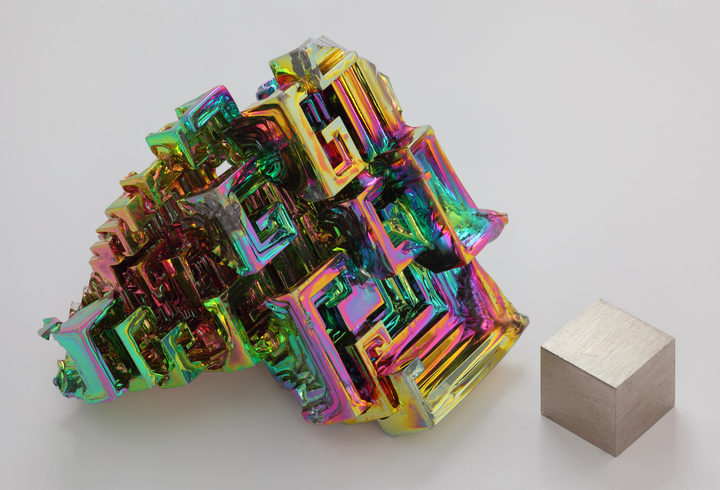 The chemical element bismuth as a synthetic crystal. The iridescent surface is a very thin layer of oxidation. Beside it is a high purity (99.99 %) 1 cm3 cube of bismuth for comparison. Photo: CC BY-NC-ND 3.0 Heinrich Pniok aka The Alchemist 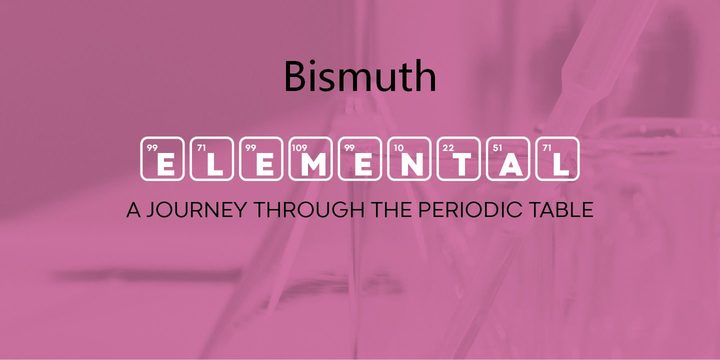 Bismuth is found in Pepto-Bismol, commonly sold in chemists to treat indigestion and gut problems.

It used to be confused with lead, and is now being used as a non-toxic replacement for lead in things like fishing sinkers.

Bismuth is also the main ingredient of fireworks known as dragon’s eggs, which finish their display with a loud cracking sound.

For a long time the bismuth-209 isotope was thought to have the heaviest stable nucleus of any element, but in 2003 it was found to be very weakly radioactive. However, it has an extremely long half life: 19 exayears or 19 quintillion years, which is more than a billion times longer than the age of the universe. That is such a long half-life that bismuth is, for all intents and purposes, stable.

Its unusual features include expanding when it is frozen (strange for a solid) and being diagmagentic, which means it is repelled by magnetic fields, rather than attracted. As a result, it is used in super-fast magnetic levitation trains.

The Elemental team was delighted to find out on Twitter about a 9-year-old fan of the podcast who’s favourite element is bismuth – here’s why:

He said to say - because bismuth crystals grow like a rainbow coloured staircase 🌈 pic.twitter.com/S1bgJ9Bxbl

We are exploring the periodic table alphabetically and so far we have looked at all the As: actinium, aluminium, americium, antimony, argon, arsenic and astatine.