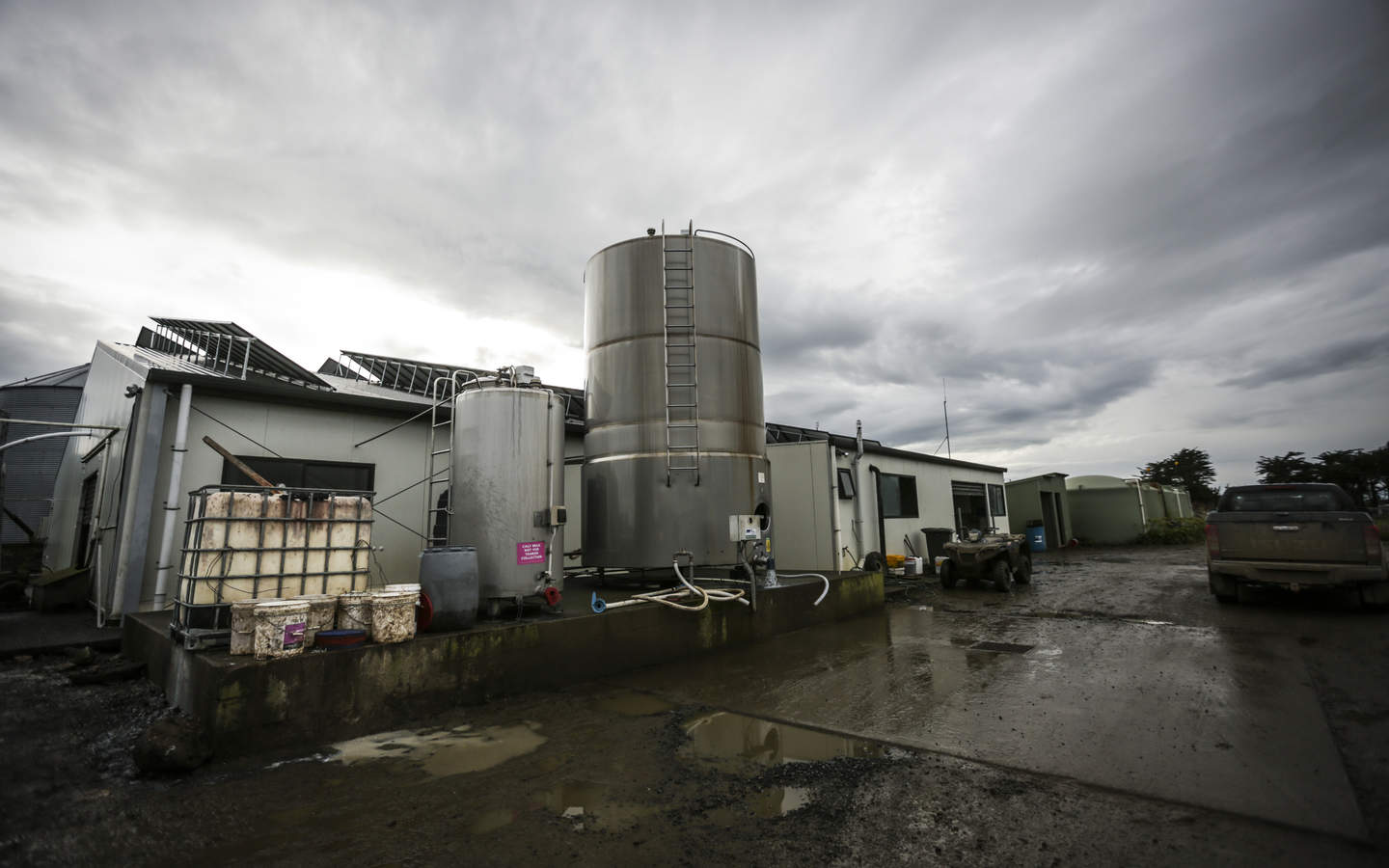 Head just west from Riverton, Southland, turn inland from stony Colac Bay and the wilder waters of Foveaux Strait, and you reach the Mathieson family farm.

Sandwiched between the sea and the bush-covered slopes of Longwood Forest, it's where Ewen Mathieson was born, and has remained ever since.

For most of its history, the 650-hectare farm ran mainly sheep and beef, but in 2008 - the year the National-led government was elected - the family decided to convert to dairy.

It turned out to be interesting timing.

The Mathiesons are just one of the thousands of families who've found themselves riding out the wild ups and downs of an industry that has rarely left the headlines since - from the highs of record milk payouts and rapid industry expansion, to the utter lows of the price crash, food safety scares and water pollution arguments. 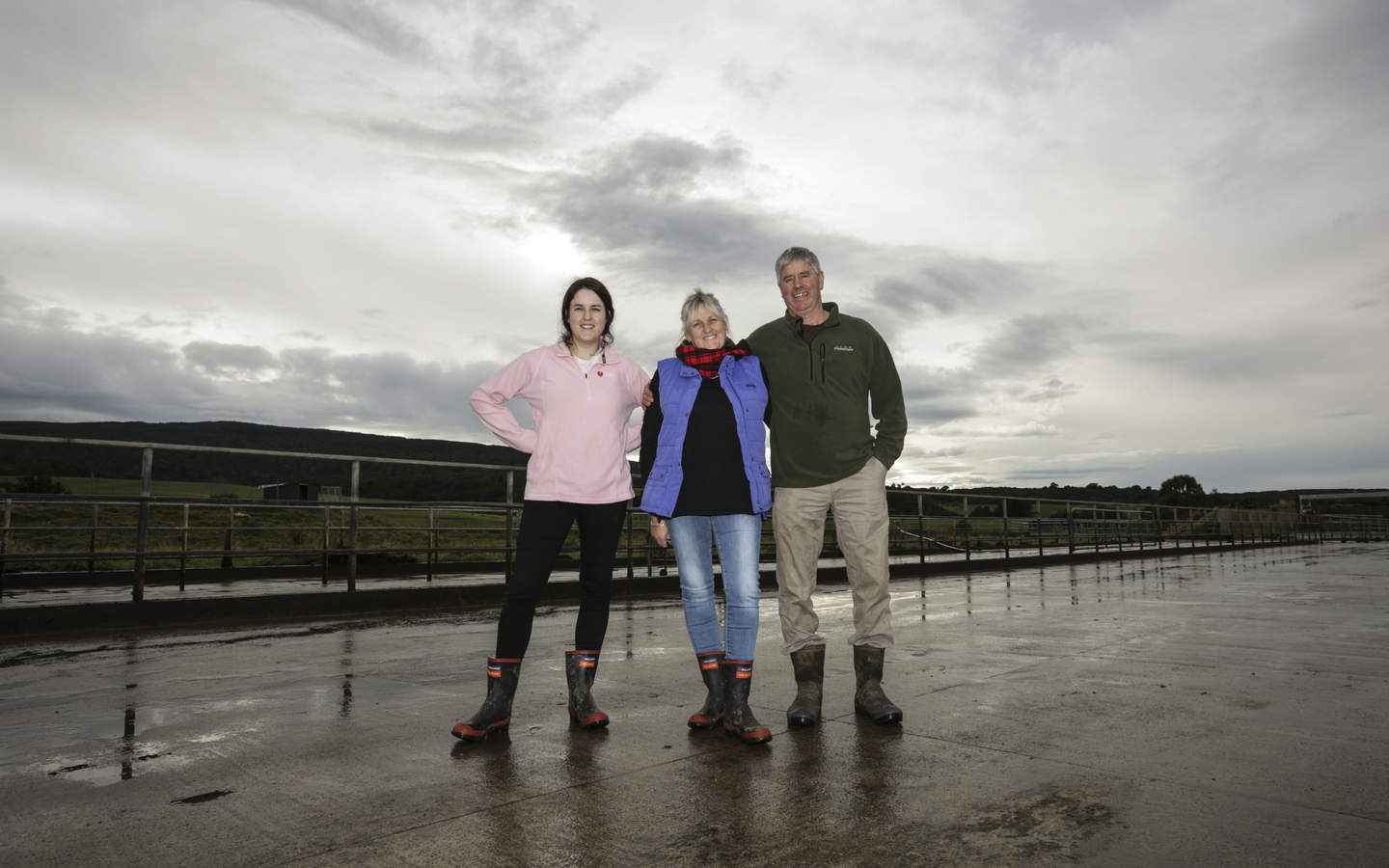 Melissa Mathieson, left, and her parents Dianne and Ewen Mathieson at home on their Southland farm Photo: RNZ / Rebekah Parsons-King

The decision to convert to dairy was about farm succession, Mr Mathieson says.

He and his wife Dianne believed it was the best way of making sure their four children could all be part of the farm in the future, if they wanted to be. 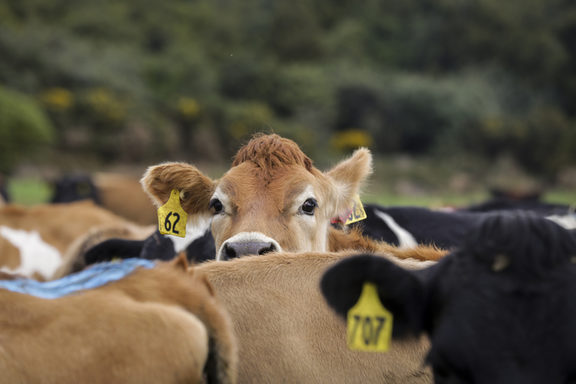 "I was the one who had the handbrake on, because the family were young. It was a lot different from being a sheep farmer... I still wanted us to be involved in the family."

It was a massive change - "financially, family, everything" - and it took the family three years to properly adjust, she says.

"The biggest cheque we used to write out then was for $50,000, but suddenly we had to write cheques for hundreds of thousands."

The debts, the long hours, and just the newness of it all put pressure on the family - and the first year was the worst.

Both were below the farm's break-even point and the debts mounted up.

Then in their third year, relief. World demand rose, driven by China and the Middle East, and the supply could not keep up.

Milk payouts climbed and ended up booming, having an unprecedented high run for five years in a row, reaching a record Fonterra payout of $8.40 in 2013-14.

News stories became all about the high price of milk, butter and cheese. On the farm, it was all smiles.

The Mathiesons' daughter, Melissa, remembers coming home one day and asking her dad how it was all going.

"He said, 'The payout is amazing, the grass is growing and the cows look effing great.'"

Mr Mathieson is more circumspect: "It gave us a chance to get our farm in order."

The whole district benefited as farmers had money to spend, he says.

"It drove huge demand for services across the board, whether it be contracting services, rural support, your local cafes and everything."

But just as there was talk of the new normal, the price crashed. 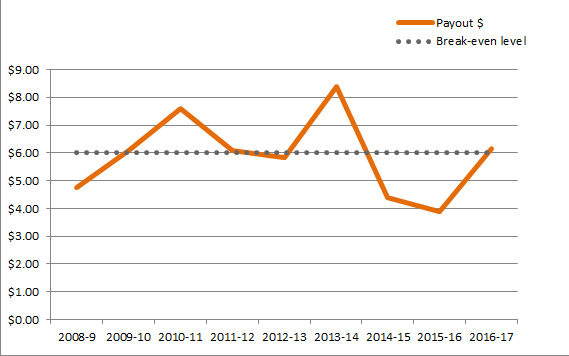 "I won't say what happened when I came home that time," Ms Mathieson says.

Mr Mathieson saw the crash coming when the price of crude oil suddenly plummeted in late 2014.

"A lot of our markets actually use that crude oil price to buy protein. The Middle East, some South American countries as well."

Suddenly there was too much milk powder in the world.

The family was spared from the worst effects by paying for a price-hedging system Fonterra had going then, but it was still tough, Mr Mathieson says.

"How would you feel if your salary halved and you would [be] actually losing money doing your job?"

The impact was disastrous for the district too - as soon as the price dropped, workers were laid off "everywhere, really", he says.

He has grown sick of the boom and bust economy, and longs for something to be done to halt the rollercoaster - or at least smooth it out.

"If you can get a consistent price it's far better, not just for farming, but right across our rural economies." 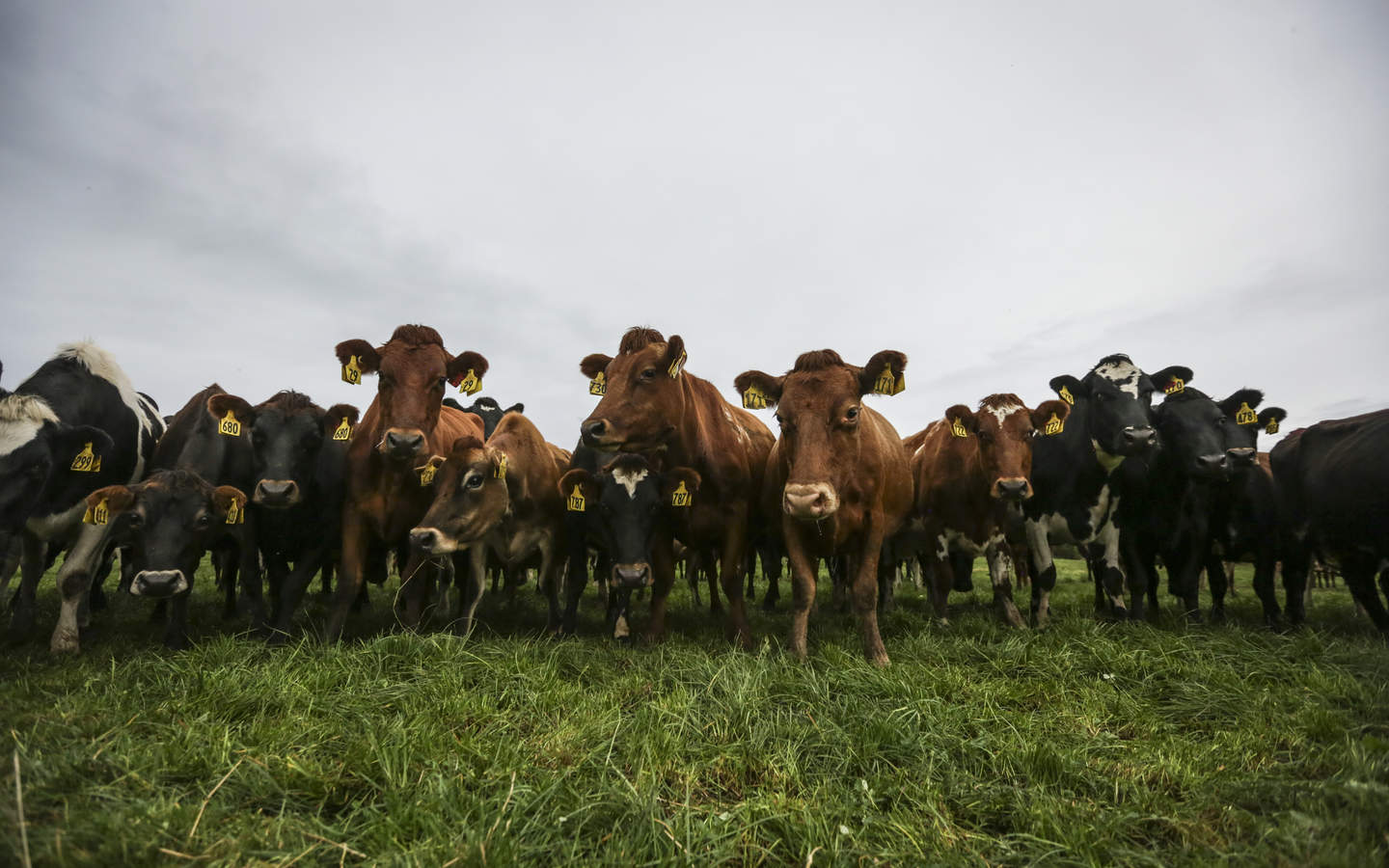 Some of the Mathiesons' dairy herd. The family converted their farm to dairying in 2008. Photo: RNZ / Rebekah Parsons-King

The payout cycle is only a part of the drama of dairy's nine-year turmoil.

Just two months before the 2008 election came the first of a series of shocks - in September that year, news broke of melamine contamination of milk in China, which killed six babies and caused 300,000 children to fall sick.

Then in 2013, with the melamine scandal still fresh in the public's mind, Fonterra had to run a global recall of infant formula after a false alert for botulism. 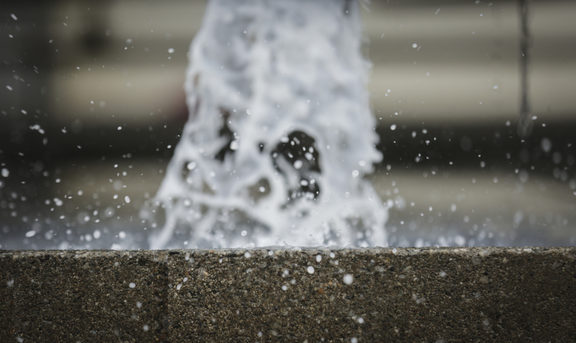 And in early 2016, the government revealed a blackmail threat by an Auckland businessman to put 1080 poison in infant formula cans.

The Mathiesons remember each scandal vividly - and say they feel directly responsible and connected.

"When it involves children, that's when it really hits people," Mrs Mathieson says.

The farm was doing the best it possibly could to provide a good, safe product and had to trust that everyone else in the chain was doing that too, Mr Mathieson says.

"But in China they were not, and that was a real concern."

The botulism scare was even closer to home, and the family had a nervous six-week wait while Fonterra traced its products.

'My future is here'

Dairy's woes are not over, as it faces a barrage of criticism for polluting the nation's waterways - something Melissa Mathieson finds hard to bear,

The family's third child, she lives in Ashburton working as a farm safety consultant, but sees her future back on the Colac Bay farm.

Despite the turmoil her parents have been through since 2008, she would have bought into the family dairy company already if she could, she says.

"Unfortunately I can't put that on the student loan yet."

The attraction lies in the lifestyle and the family values tied up in farming, she says. 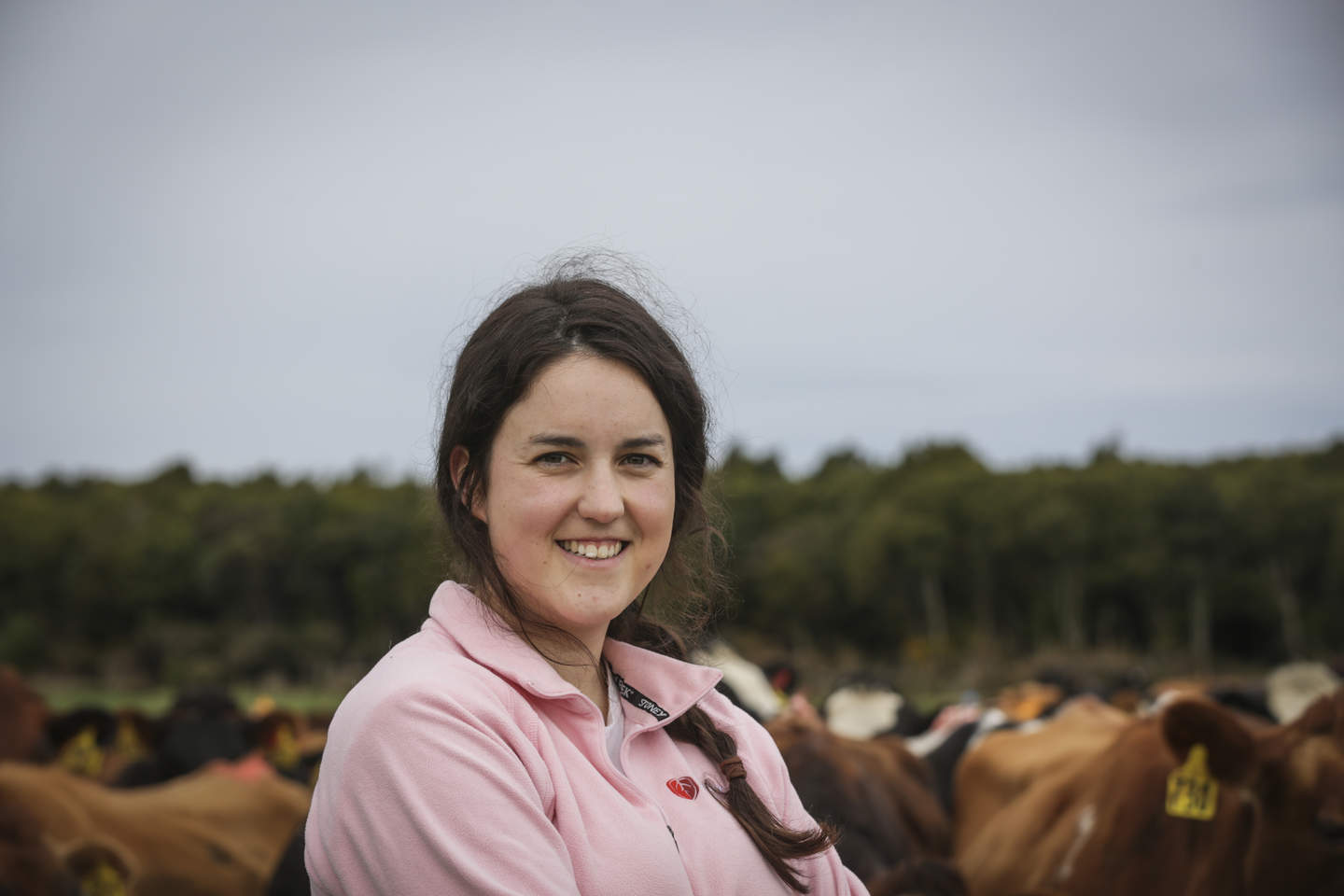 The environmental problems associated with dairying need to be taken seriously, she says.

However, the changes the industry faces as a result do not worry her, because farmers have shown how adaptable they can be - especially the technology-savvy younger generation.

"The thing that worries me is the stigma around it, and people's perception.

"Both sides of the story are not being told. There are a lot of good things happening."

Unexpectedly, all four of the children are now interested in coming back to the farm to take on various sides of the expanded business, and dairying has made that possible, her father says.

So the family is trying to plan for the future, and trying to invest in things that strengthen the farm, and smooth out the economic troughs they have already twice suffered. 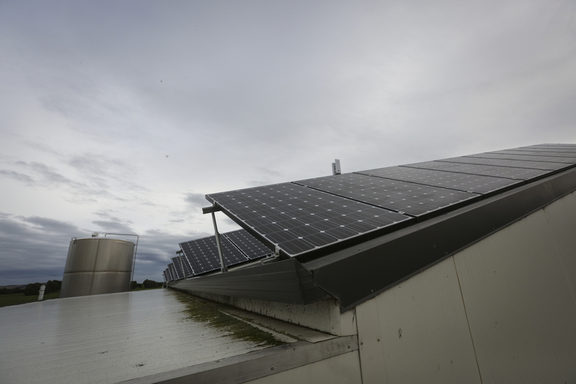 Solar panels the family installed in 2014 have already paid for themselves. Photo: RNZ / Rebekah Parsons-King

Three years ago, with one of the better payouts, they spent more than $80,000 covering the milking shed's roof with solar cells, and these now largely power the farm.

The farm was one of the first in Southland to do so and others are now interested, Mr Mathieson says.

The buy-sell electricity-generating contract saves them about $30,000 a year - meaning the system has paid for itself in three years.

But Mr Mathieson is thinking even further ahead - and dairying might not be for ever.

Future food may well be grown in a factory, not on a farm, he says.

"If synthetic milks and meats take off, we might end up growing the base materials for that."

New Zealand will have to become a niche producer of quality premium food, rather than being a mass producer, he says.

For that, the key will be a global perception of the country's clean green image that matches reality.

"It'll be environmental, social, animal welfare - and that will lead to economic [growth]," he says.

"The challenge for government will be to provide the country with leadership.

"Do we have a road map of where we need to get to with our marketing, so we are still a vibrant and viable society?"

National has stuck by the industry, and in doing so dairy's crises have defined its nearly nine years in office.

The rollercoaster may not be over yet.