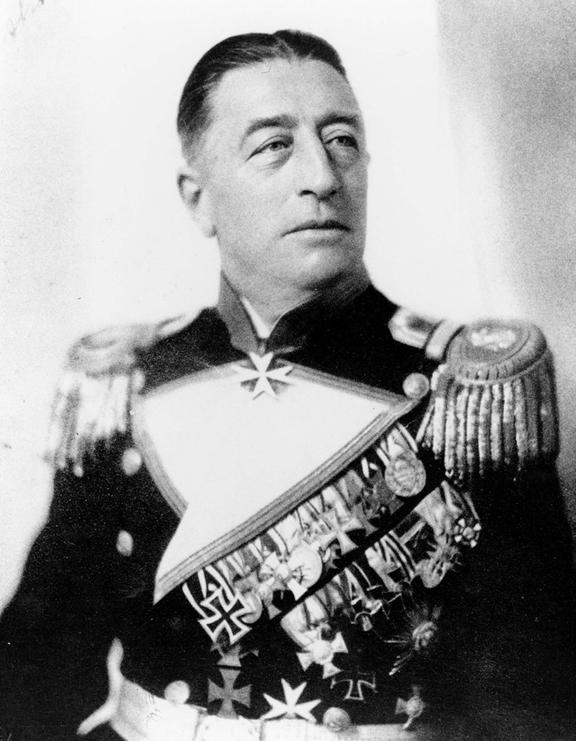 He was a child of aristocracy who ran away to sea.

He fought in the biggest naval battle of the First World War.

He captained the last square rigged sailing ship ever to be used in combat.

He sailed three thousand kilometers across the Pacific in a lifeboat.

He single-handedly saved his hometown from destruction during WWII.

And he punched a member of the Gestapo straight in the face.

He was also responsible for what probably ranks as the most embarrassing prison break in New Zealand history. Oh Felix … where to even begin?

Felix Von Luckner was born in June 1881 to a family of German military aristocrats but didn’t really seem to enjoy his childhood in the lap of luxury. At 13 years old, he ran away from home and jumped on a Russian sailing ship.

According to his autobiography he spent the next few years getting into adventures all over the world.

Some of these stories are obviously made up - but others are probably true. Life aboard a sailing ship in the late 1800s was often dramatic and dangerous .

“It was the final fling of tall ships as a commercial entity, so they were often undermanned. Very hard work, very dangerous work. People did die quite regularly.” explains Sam Jefferson, author of The Sea Devil, a biography of Von Luckner.

Von Luckner himself was seriously injured in a fall from the rigging on the high seas (by then he was about 17). He ended up stranded in Jamaica with a broken leg and no money. But when he was begging for food on the beach he saw something on the horizon which changed his life - a beautiful white ship. It was SMS Panther - a brand-new warship of the German Imperial Navy.

Some friendly sailors from  the ship helped him get back on his feet, he travelled back to Germany and enlisted with the Navy.

Eight years had passed since he had left home and when he returned to his parents it was as Naval Lieutenant Felix Von Luckner. Von Luckner’s most famous exploits came in World War One as captain of SMS Seeadler, the last square-rigged sailing ship ever to be used in combat.

Seeadler was a chameleon, carefully disguised as a Norwegian lumber transport. The crew had gone to enormous lengths to make the disguise authentic. The saloon was decorated with pictures of the Nowegian Royal family, the sailors were given a cigar box filled with forged letters from loved ones, secret compartments and false walls were put in place to hide weapons, including two small naval cannons.

“It’s so elaborate it sounds like fiction,” says Sam Jefferson. “But it wasn’t. They did go to those efforts.”

Von Luckner used this disguise to sail through the British blockade off the coast of Germany and into the North Sea. Now, the Seeadler set to work hunting down and destroying Allied transports.

In the next year and a half she sent 14 ships to the bottom, along with more than 40 thousand tons of cargo. But in her entire tour of duty, the Seeadler was responsible for only one single death - a 16 year old apprentice who was killed by a shell fragment when his ship refused to stop for the Seeadler.

Instead of going down with their ship the crew would be taken on-board the Seeadler as prisoners where they  were treated to an almost bizarre level of hospitality.

One captain said he received a bouquet of paper flowers from Von Luckner, others talked about being hosted at champagne dinners with live music.

“It was a bizarre trip,” says Sam Jefferson. “This ship which was full of champagne and people being charming to them. It must have been far from what they were expecting.”

Sam Jefferson says this strange treatment was partly due to Von Luckner’s personal ideas about chivalry and honour, but also a clever tactic to undermine Allied propaganda which had painted the German Navy as brutal baby-killing monsters after the sinking of the cruise ship Lusitania in 1915. 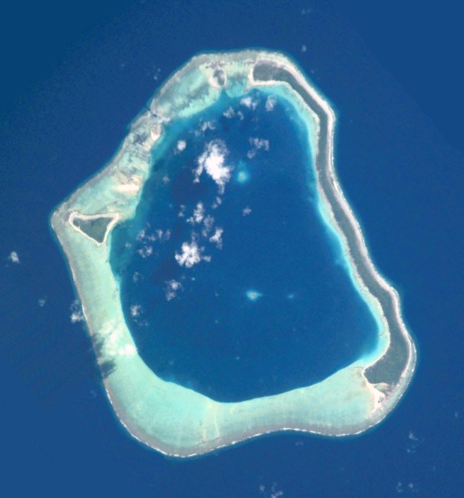 Maupelia (also known as Mopelia or Maupihaa) is the island where the Seeadler was wrecked. Photo: NASA

According to Von Luckner the voyage of the Seeadler ended in the most dramatic way imaginable. In his autobiography he said his crew had just anchored the ship off the coast of Maupelia, a coral atoll in French Polynesia, when they spotted something odd on the horizon.

“Initially we assumed it was a [mirage]; after a time we noticed how the swelling was rolling closer and closer, getting higher and higher the nearer it came. It was a tidal wave which had been caused by an undersea earthquake … The wave raged up, grabbed our ship from underneath, lifted it up and crashed it down on the coral reef. ”

It’s a great yarn… but not necessarily the most truthful account.

“[It’s] a great excuse for losing your ship,” says Sam Jefferson. “Everyone is going to say ‘gosh that was unlucky wasn’t it?’”

In reality, Von Luckner may have been trying to cover up a more embarrassing truth.

Others aboard the ship said that he was tricked into anchoring the ship unsafely by one of his captives or that one of his officers gave an incorrect order which left the Seeadler wrecked on the reef surrounding Maupelia.

TWO THOUSAND MILES IN A LIFEBOAT

Whatever caused the wreck of the ship, it left Von Luckner and his crew stranded on Maupelia. They could have simply waited to flag down a passing trading ship and surrender, but instead Von Luckner decided on a much more risky solution: Take a small group on the Seeadler’s lifeboat, sail three hundred miles to the Cook Islands, then steal a new ship to return and rescue the rest of the crew.

“The people on Maupelia were expecting never to see him again.” says Professor James Bade of Auckland University, who also wrote a book on Von Luckner called Sea Devil. “That’s an incredibly long voyage across the Pacific in terrible conditions.”

“That’s an incredibly long voyage across the Pacific in terrible conditions.”

Von Luckner’s idea was dangerous enough to start with, but what was initially meant to be a 300 mile trip turned into a two thousand mile trek across the Pacific - all in a ten meter long boat which was never designed for the high seas.

So why did they end up on such a long voyage? Well it turned out stealing a new ship was much harder than expected.

Von Luckner and his small band visited many claiming to be Dutch-American adventurers sailing around the world on a bet but no likely targets presented themselves.

Eventually a suspicious sailor in Fiji saw through the disguise, they were arrested by the Fijian police and sent to New Zealand as prisoners of war. 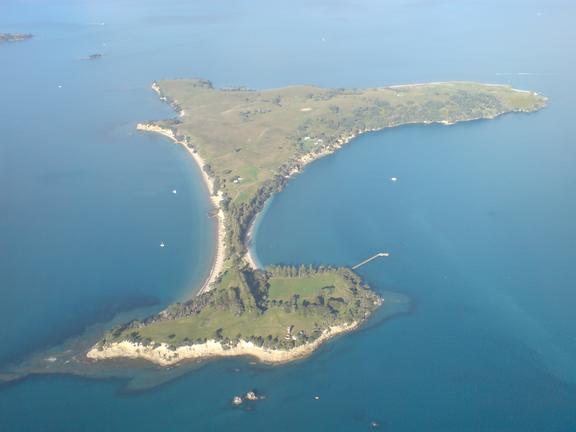 Von Luckner and his second in command were both taken to Motuihe Island in the Hauraki Gulf. The island had been set up as an internment camp for high ranking prisoners during the war. The internees included the former governor and chief judge of German Samoa who had been captured when New Zealand occupied the island early in the war.

Professor James Bade says conditions on Motuihe were unusually luxurious and low security. Particularly compared to the strict regime of Somes Island, which housed lower status internees, many of whom were simply New Zealanders of German heritage.

“People who were interned on Somes Island and then moved to Motuihe said it was like moving from Hell to Heaven,” Professor Bade says.

But Sam Jefferson says Von Luckner wasn’t content to luxuriate on Motuihe. “I mean [Motuihe] was lovely, it sounds like they had a great time there. But [Von Luckner] couldn’t help himself. He wanted more adventures.” 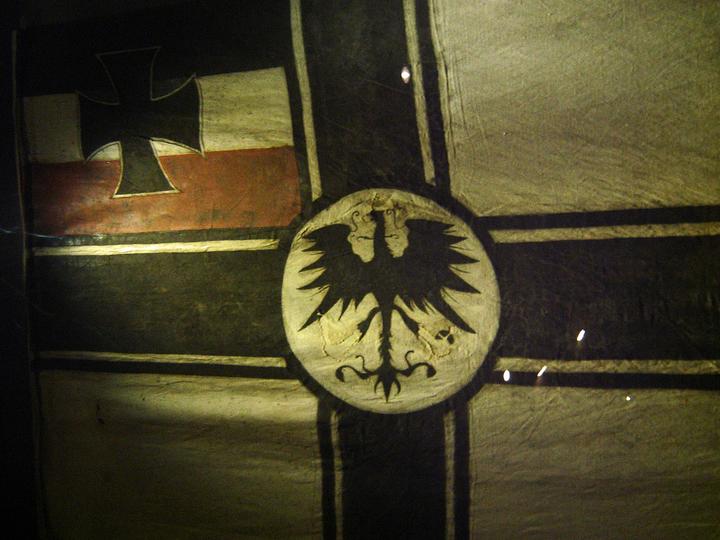 The flag which Von Luckner used during his escape from Motuihe Island is now on display at Auckland War Memorial Museum Photo: CC 3.0

Von Luckner and his second in command took advantage of the lax conditions at the camp and conspired with a group of nine other internees, stole the camp’s motor launch and escaped. The next day they hijacked a passing ship called the Moa and made a run for it.

Unfortunately for the escapees the Moa was built to transport Kauri logs, not outrun the New Zealand Navy. The lumbering Moa made it as far as Raoul Island in the Kermadecs before it was  overtaken and the absconders forced to surrender.

As he was taken back into custody Von Luckner remarked “You left the door open. You cannot blame me for walking out!”

Listen to the full Black Sheep podcast to hear about Von Luckner’s rise to fame after the war, how failed as a propaganda agent for Nazi Germany, and what happened to the rest of the Seeadler’s crew who were left behind on Maupelia.