Swashbuckler: the story of Bully Hayes

Bully Hayes is a man who made his mark on the Pacific. His image today is as a swashbuckling rogue who swindled his way from China to California, from Apia to Akaroa.

Bully could leap from the floor of a ballroom and kick the ceiling, he captured the notorious corsair Eli Boggs, he was the ringmaster of a circus on the Australian goldfields.

It’s a life story that’s inspired several books and even one Hollywood movie starring Tommy Lee Jones. But those stories usually skip over the nastier side of Bully Hayes: His brutal treatment of his crew, his career as a slaver, the multiple accusations of rape and paedophilia. 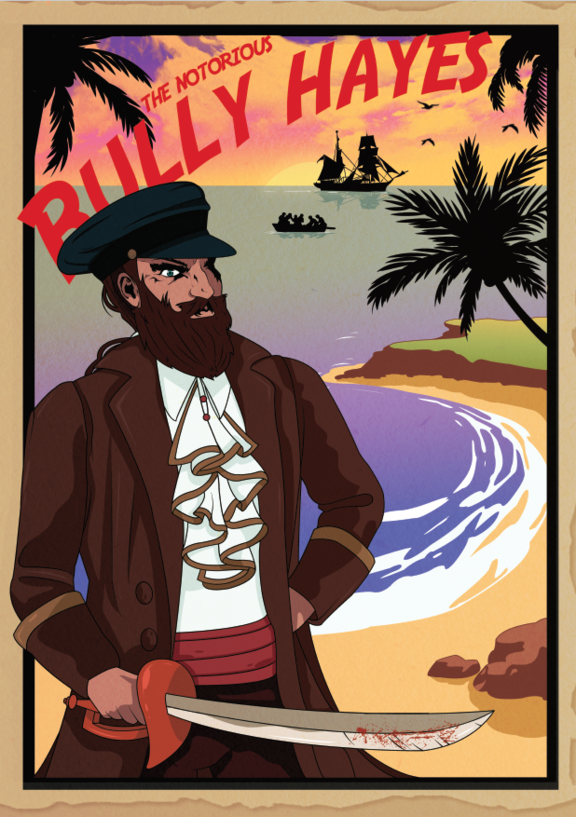 “He had this reputation of being a scoundrel from birth,” says maritime historian Joan Druett, author of The Notorious Captain Hayes. “But in those days you could print anything you like, and if it was sensational enough and popular enough - all the other papers would copy it!”

Bully Hayes (real name: William Henry Hayes) was an international criminal celebrity. Through the 1860s and 70s his name appeared in newspapers as far afield as Hawaii and Singapore. Virtually every paper referred to him as “The Notorious Captain Hayes”. 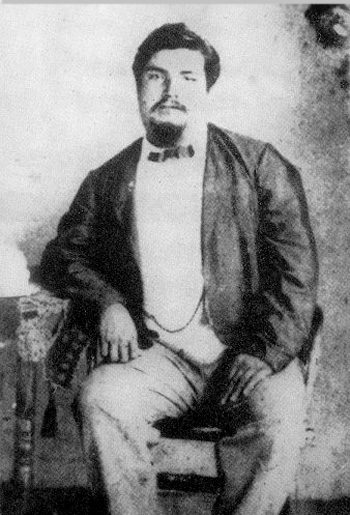 This is purported to be the only image of Bully Hayes, but Joan Druett doubts it is authentic Photo: Public Domain

Some of the stories printed in the papers were true. For example his astounding capture of the American pirate Eli Boggs - beating him into submission as the pair grappled in the ocean, surrounded by the burning wreckage of Eli’s ship. This despite Eli being armed to the teeth - literally! (he’d jumped overboard with a cutlass clamped in his jaws).

Other stories are more dubious and some seem to have been made up by Bully himself. “He liked having this spectacular reputation, and he added to it,” Joan Druett explains.

According to one origin story (almost certainly invented by Bully) he was a US Navy Captain on the China station who was Court Martialed after hanging 25 Chinese pirates without a trial.

“But according to what records there are he [would have been] 18 or 19 years old at the time. Which makes it a bit unlikely he was in charge of a US gunboat,” says Joan.

A more credible story is that Bully learned to sale as a merchant on the Great Lakes near his hometown of Cleveland, Ohio.

He is then said to have got a job with the Chinese Navy, but it didn’t take long for this position to turn into a criminal enterprise with the aid of another American captain, Ben Pease.

Bully and Pease sailed all around China extorting merchants for “protection” from pirates. “They had a protection racket. They were mobsters,” Joan explains.

After their scam was exposed, Bully and Pease were fired from the Chinese Navy and  cheating merchants became Bully’s full time career. He was infamous for “paying with the foretopsail” - loading up with cargo and then sailing off in the middle of the night without paying. He also made money through insurance fraud and by stealing and selling ships through various cons. 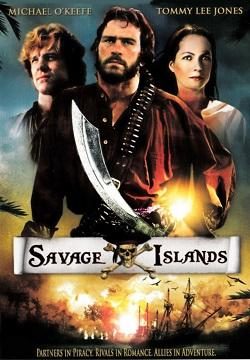 Notably he never stole a ship or cargo on the high seas, so while he was frequently described as a pirate he never committed actual piracy.

In 1859 a Honolulu newspaper printed an expose on Bully’s dirty dealing headlined “The History of a Consummate Scoundrel”. This article was reprinted all across the Pacific, with each local paper adding their own stories about Bully - some real, some imagined. This was the foundation of the Bully Hayes legend.

Maybe Bully felt he needed a break from sailing to let the heat die down because, shortly after that expose was published, he got a job as the ringmaster for a travelling circus on the Victorian Goldfields. That circus ended up going broke but Bully managed to land a job as the agent for another group of performers, the Buckingham Family.

Bully brought the Buckinghams to the Otago goldfields and helped them establish two competing theatres in Arrowtown, although Joan Druett suspects this “competition” was really just a way to drum up publicity.

Bully had a child with one of the Buckinghams, Rosa , but tragically both she and the baby died in a sailing accident near Nelson.

There were accusations from the local harbourmaster that Bully had engineered this accident as a way to murder Rosa and the baby but no evidence was ever produced. The rest of the Buckinghams don’t seem to have thought he was a murderer because they stayed on good terms and Bully ended up linking up with them again in Akaroa, today the site of the Bully Hayes restaurant and bar.

It was in Akaroa that Bully found another ship, the Wave, and got into the Blackbirding trade.

Blackbirding was a nice name for what was often a very nasty business. By this point it was 1865. The American Civil War had recently put an end to the horrific African slave trade but there was still huge demand for cheap or “free” labour in cotton and sugar production - particularly in Australia.

The slavers changed their target. They moved from the Atlantic to the Pacific, from Africans to Pacific Islanders.

According to historian Mark Derby the reason this trade is referred to as “blackbirding” rather than simply “slavery” is partly the nature of the trade.

A large amount of blackbirding was identical to slavery, “guys [were] loaded into ships at gunpoint,” says Mark. In other cases people were tricked on board through offers of free trips to neighbouring islands, only to end up enslaved on plantations. In some cases the whole deal was above board, Pacific Islanders would often willingly work on plantations for pay. 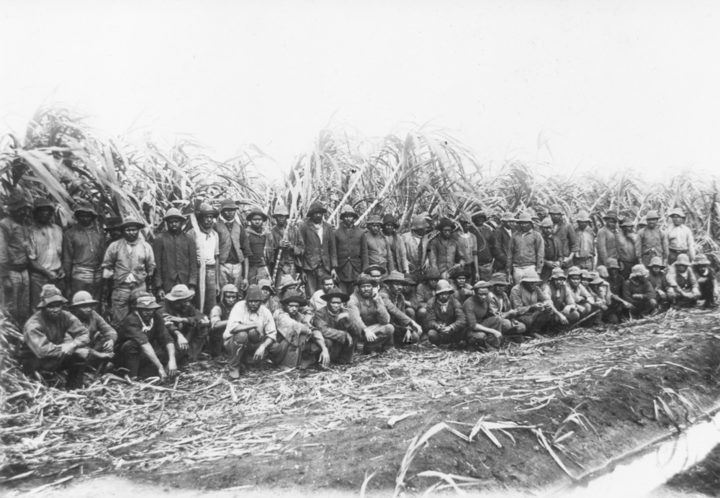 The sugar cane industry in Australia made heavy use of blackbirding victims in the 1870s, although some worked willingly for pay. Photo: State Library of Queensland

This complex web of activity made Blackbirding difficult to police. It was easy for captains to claim the slaves aboard their ships were willing workers, or had been rescued from shipwrecks.

Exactly where Bully Hayes sat on this spectrum of slavery is difficult to pin down. The Westport Times reported that his “unfair dealing with the natives” had “injured the market for others”, which suggests he was at least misleading people if not outright enslaving them.

Bully also didn’t give up thieving. Together with his old mate Ben Pease he robbed coconut oil traders, occasionally threatening to bombard villages  with his cannon if they didn’t give up their harvest.
Bully also went into the coconut trade himself, using indentured or slave labour on plantations he established in Micronesia.

There are some very nasty stories from this period of Bully’s life, including multiple allegations of rape against young pacific island women. One case involved a girl who was only 10 years old.

Bully’s brutality wasn’t only reserved for pacific islanders. He had a legendary temper and flew into “black rages” against his crew. One former crewman described an incident to a newspaper where Bully came up on deck to find the helmsman was slightly off course.

“[Bully] took hold of [the helmsman] by the back of the neck and the strap ‘round his waist and lifted him up as high as he could reach and flung him on the deck so hard that he broke his arm and two ribs and a nasty smash on the face - “there now i guess i’ll teach you to steer the course i give you next time” said he as the poor fellow crawled away.”

Bully’s mistreatment of his crew is what finally brought an end to his story. He was beaten to death by the ship’s cook, a dutchman who Bully had previously tied to a tree and flogged.

This dutch cook wasn’t charged with a crime once the ship made it back to port. Instead he was hailed as a hero for his part in ending the “legend” of The Notorious Captain Hayes.

Listen to the full podcast for more on Bully Hayes life, including the remarkable and tragic story of how he was arrested by a Samoan chief for Blackbirding.