Soldier of Fortune: the story of Gustavus von Tempsky (part 2)

One who followed glory's beacon from his boyhood till he fell,
Dying like a valiant soldier, after fighting long and well.
List the story of Von Tempsky,—master of the sword and lance,—
Brief the record, yet it seems like some wild legend or romance;

This is a stanza from "How Von Tempsky Died" an insanely romantic ballad penned by Thomas Bracken nearly 20 years after Major Gustavus von Tempsky was shot dead at the Battle of Te Ngutu o te Manu. 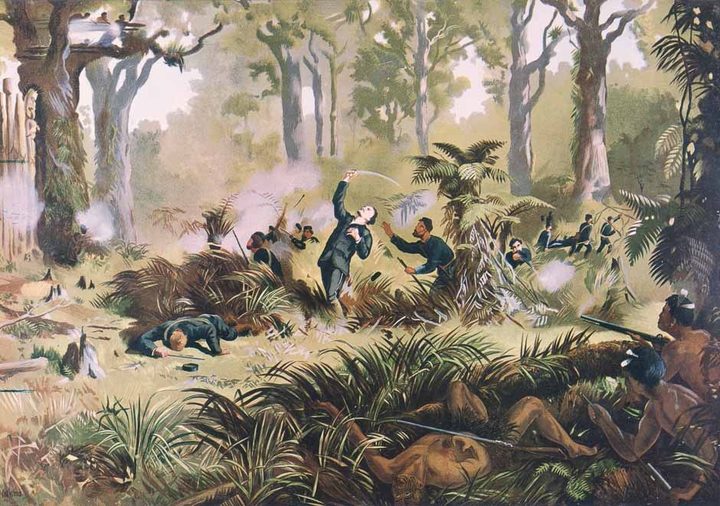 In Bracken's day Von Temspky's fame was only reaching new heights. He had become the great hero of the New Zealand wars who wielded his bowie knife with the same skill as his paintbrush; whose troops worshiped him and whose enemies feared him.

This narrative held sway in New Zealand for nearly a hundred years, the darker side to his story was mostly ignored. In the last 40 years that's started to change.

"He's been called just a bloodthirsty mercenary, a glory hunter and a terrorist," says Andrew Moffat, writer and researcher at Puke Ariki Museum in New Plymouth.

Von Temspky was a deeply contradictory figure, even in his own time. His troops may have loved him but some of his fellow officers despised his self-promotion and political ambition. He may have written critical accounts of atrocities at Ōrākau and Rangiaowhia but he also praised "scorched earth" raids against Māori in Taranaki - and he participated in those raids personally.

In part 2 of this podcast Black Sheep investigates how von Tempsky created his own legend, and how that legend has evolved since his death in 1868.