October 10th, 1847. The brutal murder of a Devonport family leaves Auckland fearing an invasion of vengeful Māori. But when that threat fails to materialise the police are left trying to solve New Zealand’s first ever whodunnit... 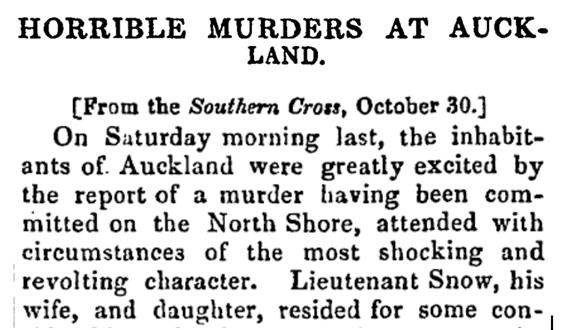 A newspaper clipping from the Daily Southern Cross reporting the murder of the Snow family Photo: PapersPast

It began just after midnight, when lookouts on the HMS Dido spot flames rising from the house of Lieutenant Robert Snow.

The sailors rush ashore and extinguish the blaze but after, find the badly mutilated bodies of Lt. Robert Snow, his wife Hannah and their four year old daughter, Mary.

Pieces of flesh had been cut from all three bodies. The sailors know what that means… Cannibalism.

The New Zealander (one of Aotearoa’s very first newspapers) is quick to lay blame for the murder of the Snow family:

“There can be no doubt that the natives were perpetrators of this foul deed. Our native police pronounced the wounds to be Maori handiwork at once. The mutilation of the bodies, from all three of which large pieces of flesh had been cut by knives, and the parts from whence they were cut, is conclusive evidence.”

The only controversy is whether the Māori killers were motivated by personal revenge against Snow, or if this is a precursor to a wider attack on Auckland itself.

As The New Zealander put it: “If the matter be political, this act, according to Maori custom, is a declaration of war.”

Most of the prominent Māori chiefs who live near Auckland are equally convinced the murders were committed by Māori and are even more anxious than the European colonists to find the perpetrators.

“Chief Patuone over on the North Shore was very friendly towards Pakeha and chief Te Whero Whero in the Northern Waikato was also” says Terry Carson, author of The Axeman’s Accomplice - a book about the Snow family murders. “They were quite keen that nothing interfere with the relationship” he explains. 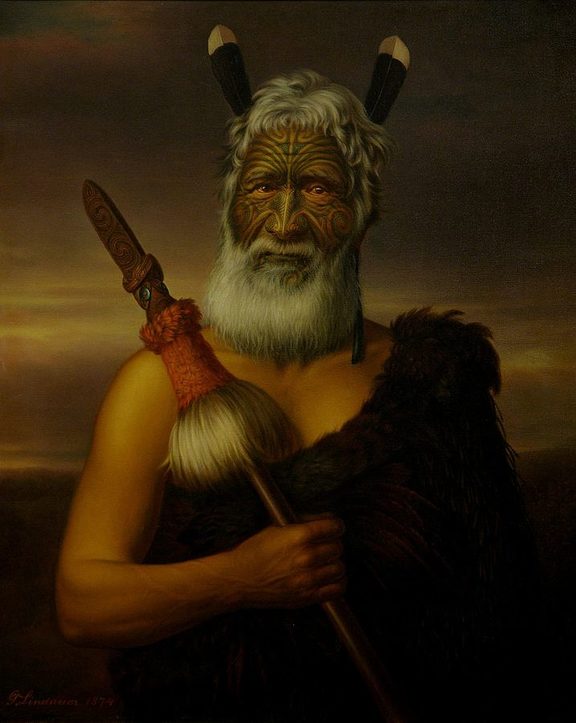 Eruera Maihi Patuone was one of the paramount Rangatira in the area surrounding Auckland at the time of the Snow murders and played an active role in attempting to find those responsible. Photo: Gottfried Lindauer, Auckland Art Gallery

Māori leaders assure the colonists that they will track down the person responsible and at first they have some success. A few weeks after the murders a group of prominent chiefs from Ngāti Maru and Waikato-Tainui arrive in Auckland with a prisoner; a man called Mamuku, who they say killed the Snows.

Mamuku is publicly interrogated on the veranda of Government House, but the questioning quickly reveals he knows nothing about the murders.

Police and Māori are stumped. But then, a break; the killers give themselves away.

It begins with a horrific act of domestic violence involving two of the Snow family’s neighbours, Joseph Burns and Margaret Reardon. The pair had been living together for four years and had reputations for heavy drinking.

Joseph arrives at the house of Margaret’s sister asking to see her. When she comes to the door the pair argue and Joseph lashes out violently.

“He produced a razor which he’d hidden in his hat,” says Terry Carson. “He attacked Margaret Reardon and quite badly injured her.  The description of her injuries given by the medical people we’re quite horrific. Very, very deep cuts [to her throat]. She was extremely fortunate they didn’t sever an artery.”

At trial the jury are told the cause of the argument was that Joseph wanted to emigrate to Australia with one of the couple’s children, and sell the land where they lived to fund the trip.

Joseph is convicted of grievous bodily harm and sentenced to transportation. After the sentencing the police ask Margaret Reardon if she knows anything about the Snow family murders. Cryptically she replies that Joseph might have the information.

Somewhat astonishingly, Margaret agrees to visit Joseph in prison alone. After a discussion they both emerge saying two of their neighbours killed the Snows, a man called Thomas Duder and his brother in-law Oliver.

In a preliminary hearing, Margaret Reardon claims she overheard the following conversation between Thomas Duder and Joseph Burns.

DUDER: Lieutenant Snow has got a swag of money from Auckland and we must have it.

BURNS: But I will never consent to imbrue my hands in innocent blood.

DUDER: There is only little Mary and I will manage that; but it must be done tonight; if you don’t want to come I will manage myself.

BURNS: Where shall we put the stuff.

DUDER: We can bury it under the flagstaff

Earlier in the day, Joseph confirmed that Margaret’s account of that conversation was accurate, but said he only acted as a lookout while Duder and Oliver carried out the killings.

But suddenly, while Margaret is still on the stand, a man comes rushing into the courtroom. The Southern Cross newspaper reported what happened next:

“...an alarm was given, that the convict Burns had cut his throat, and was bleeding to death. The Colonial Surgeon, who was in Court, hastened to the gaol, and after an absence of considerable duration, returned and informed the Court that the wound was not mortal, and that Burns was not in immediate danger. He added, however, that Burns now denied what he had stated relative to the murder.”

It seems Burns had a sudden attack of conscience over falsely accusing his two neighbours of murder. And, as you might expect, this led to immediate suspicion that Burns himself was the man who murdered the Snow family.

Joseph Burns is committed for trial, and Margaret Reardon changes her story - now testifying that Burns alone was the killer. However, Terry Carson says the admission that she’d previously lied under oath was problematic for the prosecution of Joseph Burns.

“It was hard to see her being a very reliable witness,” Terry says. “But I think everyone was very keen to convict Burns of the offence and they had to make use of what they had.” 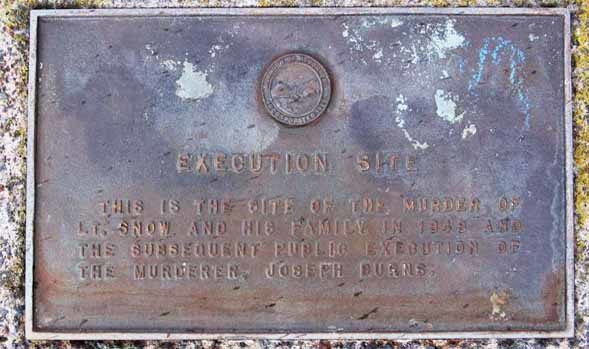 A plaque near the waterfront in Devonport marks the site both of the murder of the Snow family and the execution of Joseph Burns. Photo: www.visitdevonport.co.nz

Burns is hanged on June 17th, 1848. He is the first European to be judicially executed in New Zealand.

Shortly afterwards Margaret Reardon faced her day in court. She was convicted of perjury and became the first and only woman to be sentenced to transportation. She was shipped to a convict colony in Tasmania but was released after seven years and lived the rest of her life in Australia.

Listen to the full Black Sheep podcast to hear about the role Margaret Reardon may have played in the Snow Family murders, why she lied to protect Joseph Burns and the political ramifications of his execution for Maori.