Radical: the story of Arthur Desmond

Arthur Desmond is possibly the most widely read and influential political writer New Zealand has ever produced.

Unfortunately, the book he’s best known for is – in the words of one reviewer on Goodreads.com – “sexist, racist, classist and more violent than any Tarantino movie”. And the people his book is influencing these days are mostly neo-Nazis, white supremacists and misogynists.

But in his early days as a farm worker in Hawke’s Bay, Desmond was a champion of workers’ rights and the rights of Māori. So, what happened?

In the words of one historian, he went “so far to the left that [he] dropped off the edge.” 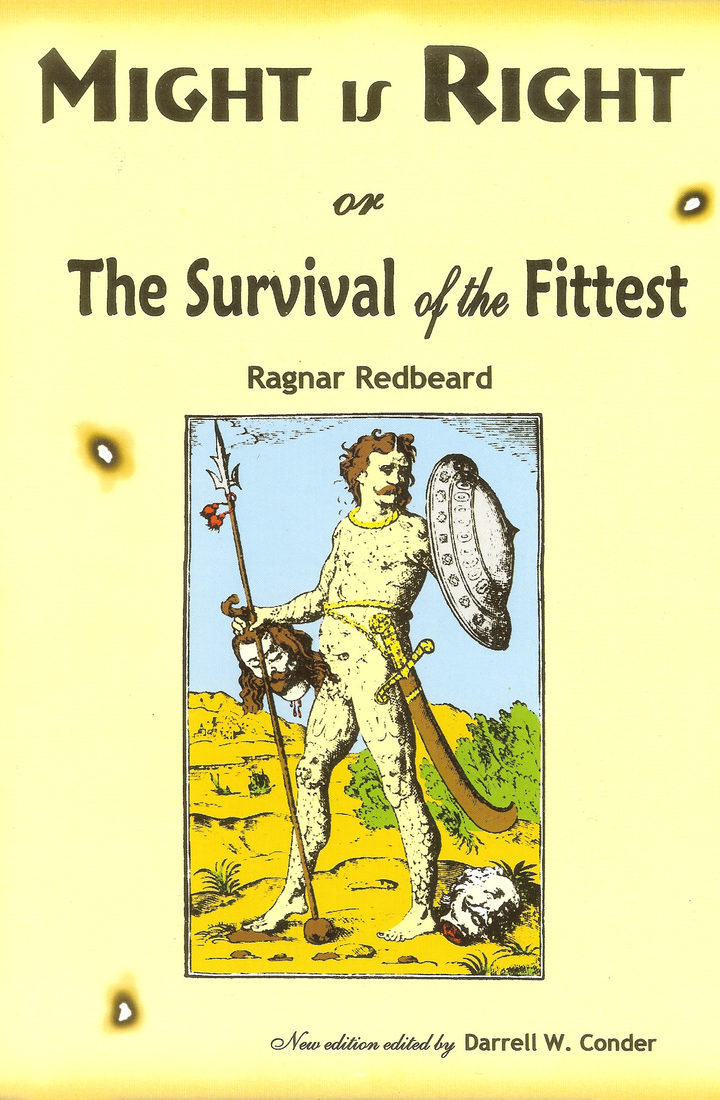 The front cover of Might is Right which Desmond wrote in the 1890s (2005 edition) Photo: Fair use

Arthur Desmond has mysterious origins. Nobody knows where he was born or who his parents were.

The first time Desmond appears in the historical record is in 1883. He was about 25 years old and running to become the Member of Parliament for Hawke’s Bay. Desmond ran a populist campaign, rallying crowds of fellow farm workers who were fed up with the rich sheep barons who dominated the political establishment of the time.

“I have seen men living in a hut where no fire was allowed. Going to bed on a wet, cold day to keep themselves warm. I have seen the wind and the rain coming in through the cracked roof - and the winter storm whistling through the rafters, as it does through the rigging of a ship. And I have also known of the owners of these colonial [farm workers] gallivanting in some London ballroom upon the profits of these slaves’ labour.”

Desmond split the vote with another left-wing candidate on his first run for parliament and performed even better during his second run in 1887 – but failed to win a seat. 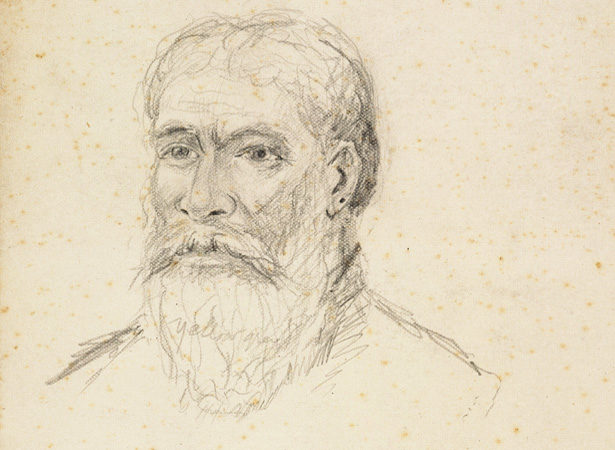 A sketch of the Maori prophet and guerrilla Te Kooti from 1887 Photo: Alexander Turnbull Library, A-114-004-2

However, he alienated the settler community with his support for the former Māori guerrilla leader and founder of the Ringatu church, Te Kooti. When public meetings were held to protest a planned trip by Te Kooti to Gisborne, Desmond was the only Pākehā who raised his voice in support.

He admired the idea of a very strong and even ruthless leader who was prepared to go to any lengths, including extreme violence. [Desmond’s] whole career and all his political writings were based on an admiration and exultation of such figures. Mark Derby

“It was a very brave thing to do,” says Mark Derby. “He was bodily thrown out of the meetings and even beaten up, but it didn’t stop him from taking this stance.”

However, Derby doesn’t think Desmond’s support for Te Kooti was rooted in heartfelt sympathy for the plight of Māori. Instead, he says it was linked to Te Kooti’s violent past as a guerrilla leader.

“He liked Te Kooti’s style. He admired the idea of a very strong and even ruthless leader who was prepared to go to any lengths, including extreme violence. [Desmond’s] whole career and all his political writings were based on an admiration and exultation of such figures.”

Desmond further antagonised his supporters in Hawke’s Bay by refusing to accept responsibility for campaign debts and was eventually run out of town.

He found work with the gum diggers in Northland just as the union movement began to get its first surge of popularity. “Desmond loves this,” Derby says.

“It gives him lots of opportunities. He ends up being employed as a union organiser.” 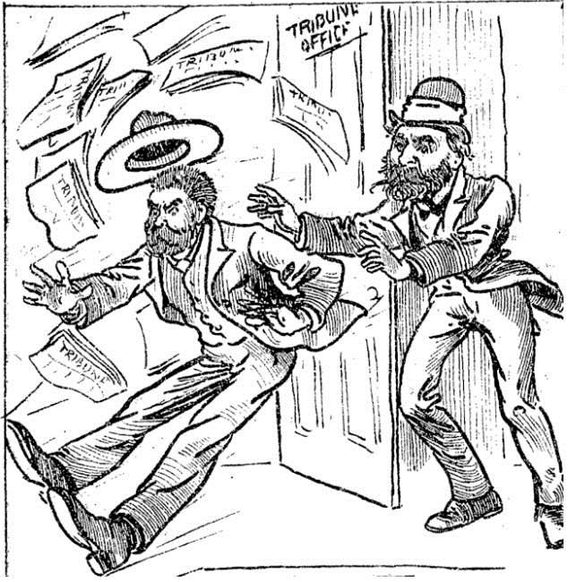 A cartoon from The Observer of Desmond being evicted from the office he used to publish the Tribune in 1880. Photo: PapersPast

Desmond convinced the union movement to support him in writing and editing a pro-union newspaper called the Tribune - achieving a lifelong ambition of being paid to work as a writer in Auckland.

But, Desmond once again alienated his supporters. This time by publicly defaming a prominent politician with a forged letter and plagiarising some of his published essays.

“Desmond’s allies in the Labour movement begin to abandon him,” says Derby. “For all his skills as an organiser and as a propagandist, he’s trouble, he’s high risk.”

Desmond also faced significant legal trouble for defamation and plagiarism. He was forced to flee New Zealand and travel to Sydney, Australia.

Donald Trump sees himself as the kind of conquering hero that Desmond exalted in Might is Right. Someone who seems to be above or disdainful of the petty morality that constrains the rest of us. Mark Derby

In Sydney, Desmond got an extraordinary second chance at political success. He befriended several left-wing agitators who went on to become major leaders of the early Labour movement, including two future Australian Prime Ministers and the future leader of the New Zealand Labour Party, Harry Holland.

“[Harry Holland] was part of the group that Desmond was rubbing shoulders with, getting drunk with, writing poems with,” says Derby.

“In fact, he did so well he was actually offered a safe Labour seat. He could have become a Labour MP!”

But, yet again, Desmond’s self-destructive streak emerged, this time in a newspaper he wrote called Hard Cash, which published details of scandals and fraud within the Sydney financial system. The paper included defamatory and anti-semitic attacks on prominent businessmen, but many of its allegations about financial chicanery turned out to be accurate. 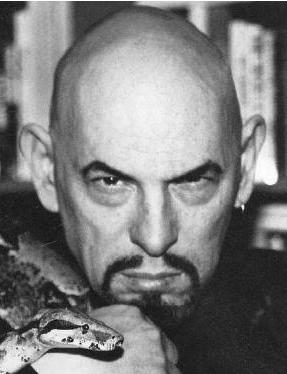 Anton LaVey, founder of the Satanic Church who plagiarised Might is Right when he wrote The Satanic Bible Photo: Fair use

“It was a little muck-raking scandal sheet,” says Derby. “It was scandalous, it was libellous, it was illegal - the police were chasing around trying to find the people behind it. But at the same time, people were paying good money for this thing.”

The Australian police were never able to catch up with Desmond, but they did get so close that he was forced to flee the country.

Desmond settled in the United States in 1895. While he was there he published the book he is best known for today: Might is Right, written under the dramatic pen-name of “Ragnar Redbeard”.

On war he wrote:

“... the prophet of unreason — the preacher of rabble-rabies. All that is enervating and destructive of manhood, he glorifies, — all that is self-reliant and heroic, he denounces.”

On the American Declaration of Independence:

“Its ethical and most of its political conclusions are shams, deceptions, and cold-blooded dishonesties — incandescent Lies.”

“Women and children BELONG to man; who must hunt for them as well as for himself. He is their lord and master, in theory and in fact.”

“The African, Mongolian, Semite, or Negro breeds are all fundamentally different in formation, constituents, and character; from men of Aryan descent. … Some men ARE born better, born nobler, born braver than others.”

In spite (or more likely because of) the horrible stuff in it, Might is Right may be the most widely read and influential book ever written by a New Zealander. 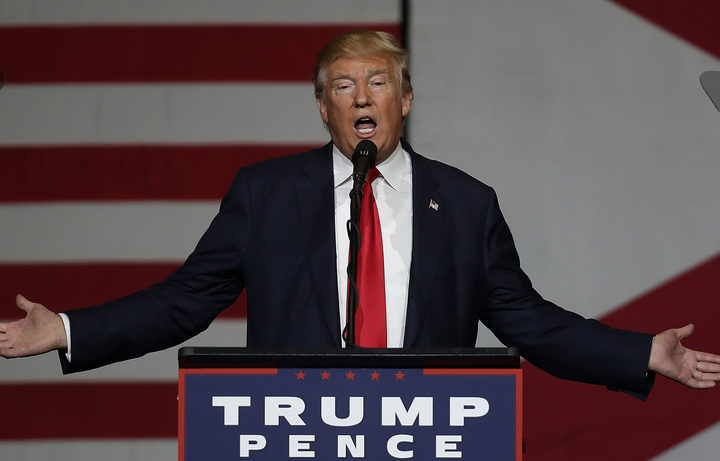 Mark Derby says Might is Right has influenced many supporters of Donald Trump. Photo: AFP

Right now, the book is particularly popular with the so-called ‘Alt-Right’ supporters of US President Donald Trump.

Derby sees a lot of parallels between Desmond’s writing and Trump’s approach to the Presidency.

“Donald Trump sees himself as the kind of conquering hero that Desmond exalted in Might is Right. I think Trump genuinely sees himself that way and I think his supporters do too.  Someone who seems to be above or disdainful of the petty morality that constrains the rest of us.”

“It’s a very disturbing, very unpleasant political philosophy, but it led to the rise of Hitler and Mussolini. I don’t see Trump in their company exactly but I do see a kind of continuity between them, and I do see Arthur Desmond and his work lending some intellectual and philosophical force to those lines of thought.”

Listen to the full Black Sheep podcast to hear the mystery of Arthur Desmond’s death and for more details of his outrageous actions in Australia.