Abortionist: the story of Annie Aves

Content Warning: This podcast deals with abortion and infanticide. Some may find it distressing.

On October 3, 1938 the city of Napier was in an uproar. That night, a 51 year old woman in the upmarket suburb of Westshore had been gunned down in her front doorway after she opened the door to a stranger.

The funeral for the woman drew a big crowd. It followed the hearse through the street and covered her coffin in flowers, but when the man who shot this woman was sentenced the judge all but said the victim had brought her death on herself.

That’s because Chief Justice Sir Michael Myers knew this woman very well - she was Annie Aves, the famous abortionist who had been tried four times for “using an instrument with intent to procure a miscarriage”.

All four juries failed to reach a verdict. 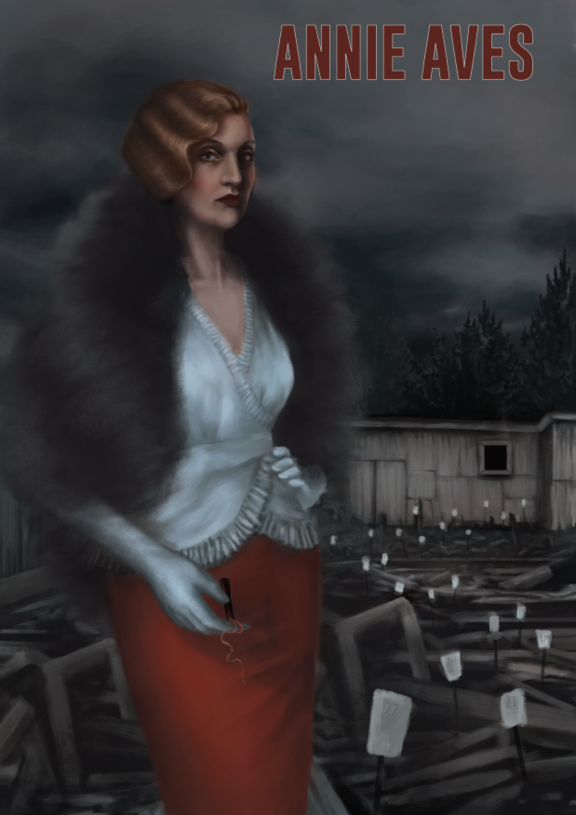 Annie was orphaned at an early age. Her father committed suicide while she was still in the womb and her mother died when she was three years old.

After school she went into domestic service and married Hawke’s Bay grape grower, John Craike. The pair had two children but separated after 12 years of marriage. After John’s death in 1931 Annie remarried. This time to a music teacher called Charles Aves.

Young women were often very vulnerable. If you were a domestic servant in a house and you got pregnant you lose your job  Barbara Brookes

Otago University historian Barbara Brookes says it was probably around this time that Annie began her illegal trade in abortion. It was the middle of the Great Depression - Annie would have needed the money and women needed her services.

“Many women said they just couldn’t afford another mouth to feed,” Barbara says. “Young women were often very vulnerable. If you were a domestic servant in a house and you got pregnant you [would] lose your job.”

So-called ‘back-street’ abortionists could make a lot of money as long as they weren’t caught. Annie’s records suggest that over an 18 month period she dealt with 183 clients and what would have translated into more than $200 thousand.

She used a method called the “sea tangle tent” where a stick of seaweed is inserted into the mouth of the uterus to induce a miscarriage. It was a relatively safe technique which is still sometimes used today by obstetricians to help bring on labour.

But the law caught up with Annie Aves in June 1936. “There is a tip-off to the police and the police raid her premises. They find 22 sets of foetal remains,” Barbara says.

There was evidence that one of these children might actually have taken a breath. It might have been born live. Barbara Brookes

What those remains reveal  is that unlike many abortionists of her time, Annie was prepared to perform very late term abortions.

“There was evidence that one of these children might actually have taken a breath, it might have been born live. So that was akin to infanticide,” Barbara says.

Along with the physical remains the police seized Annie’s record books. They appear to have used these records to track down some of her clients who testified against Annie at trial.

That might seem ungrateful but Barbara Brookes thinks these women might have been compelled to provide testimony. “If the records revealed who they were, they might have been subject to prosecution themselves if they didn’t testify,” she says.

The record books also seem to reveal Annie had a personal code when it came to collecting payments for the abortions.

“She believed the men should pay,” says Barbara. “I think she felt the women had got into trouble by [a] man, so the man is the one who should pay.”

Barbara says Annie also had a sliding scale when it came to the amount she charged for an abortion. “There were some married women who recounted the story of their abortions and they might be charged 10 pounds for the first [abortion] and 20 pounds for the second” she says.

In the words of one judge who dealt with her, the evidence against Annie was “convincing and conclusive” but four separate juries were unable to reach a verdict. The Solicitor General eventually filed a stay of proceedings.

Chief Justice Sir Michael Myers, wrapped up the fourth and final trial by remarking that Annie should avoid “[being] brought before the Court again on a charge of this kind” warning that “if you are, you may not be so fortunate, as you are on this occasion."

Annie didn’t take that warning particularly seriously. Two years later in 1938 she was  back at work. This time out of a house in Westshore, Napier.

One of her clients was 19 year old Alice Stafford who became pregnant to 21 year old Colin Hercock - her boyfriend of two years.

But the day after her abortion Alice became badly ill. “The doctor says she must go to hospital, she’s got blood poisoning,” Barbara says. “There was probably some kind of perforation, some infection caused. So she’s taken off in the ambulance.”

When Colin arrived at the hospital he got the worst possible news. He was told that Alice had died.

Holding Annie Aves responsible for his girlfriend’s death, Colin lashed out. He borrowed a .22 rifle from his brother, took a taxi to Annie Aves’ house and shot her through the chest.

And, in an almost Shakespearean twist, it turned out Colin’s girlfriend never died at all. There had been a miscommunication at the hospital. Alice recovered and even gave evidence at Colin’s trial. Colin’s lawyer would later claim in court that he didn’t mean to kill Annie and just meant to give her “the fright of her life”. As a result, the jury found Colin guilty of manslaughter, not murder.

If [Annie Aves] had been dealt with as she should have been, this tragedy would not have happened. Chief Justice Sir Michael Myers

In another ironic twist, the judge in Colin Hercock’s trial was Sir Michael Myers - the same judge who presided over Annie Aves’ final trial. Referring to that series of failed prosecutions, Sir Michael said that “if [Annie Aves] had been dealt with as she should have been, this tragedy would not have happened.”

However, he refused to accept Colin Hercock’s lawyer’s excuses for his client’s actions saying "[Annie Aves] was entitled to her life, [one] that you have destroyed."

Listen to the full Black Sheep podcast to hear more about the history of abortion in New Zealand, how Annie Aves’ actions compared to other abortionists of her time and why four juries were unable to reach a verdict in her case.