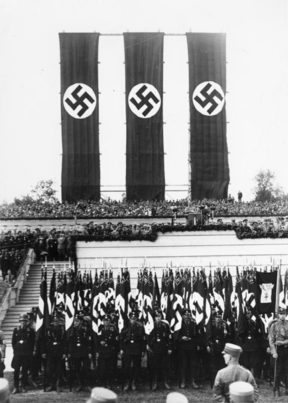 In 1942 the head of New Zealand’s first spy agency, the Security Intelligence Bureau (SIB), sent a shocking letter to the Prime Minister.

Major Kenneth Folkes told Peter Fraser that Nazi agents had infiltrated New Zealand. He said the Germans had established a network of saboteurs and were planning on blowing up critical infrastructure and assassinating top level politicians.

But... the Nazi conspiracy was a hoax, and some historians think Major Folkes deliberately expanded that hoax in an effort to get more power for the SIB. 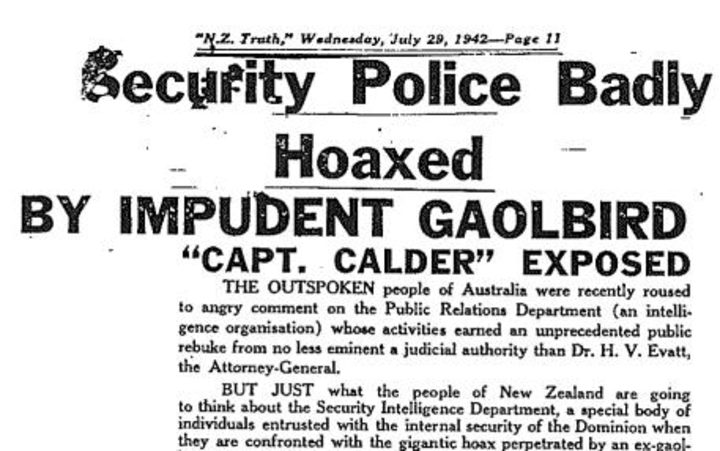 The hoax was dreamed up by two criminals Alfred Remmers and Sydney Ross, who were serving time together in Waikeria prison.

“Remmers was a policeman,” says Sherwood Young, a retired police historian. “He was dismissed because he committed a crime - burgling houses while he was on the beat.”

Young says Remmers was the mastermind of the hoax but needed a partner in crime to pull it off. “[Remmers] was a man who is sadly dying. Within a very short time he’s dead of leukemia and he’s in need of some conman to do the legwork.”

That conman was Sydney Ross, a fraudster and safebreaker.

“He saw himself as a clever guy who could get away with things,” says Beverly Price, who helped her late husband Hugh Price write a book on the Syd Ross hoax, The Plot to Subvert Wartime New Zealand.

After being released from prison in March 1942, Ross rang the Minister for Public Works and told him he’d been approached by Nazi conspirators who wanted to use his experience in safebreaking to blow up critical infrastructure to weaken New Zealand ahead of a German invasion.

“Ross started off with utter honesty,” says Beverly Price. “His way of handling his hoax all along was a mixture of what was true and verifiable; and the fantasy - that there were conspirators trying to get in touch with him.”

The government might have dismissed his story if not for a remarkable coincidence. The Prime Minister had just been told that a plot very similar to the fake conspiracy Ross was describing had just been uncovered in Australia. 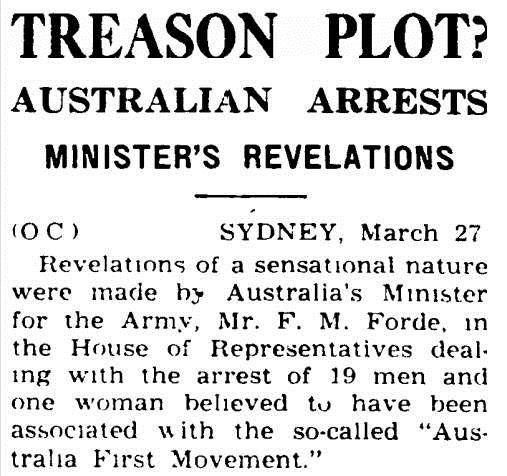 It turned out a proto-fascist group called “Australia First” (no relation to the current Australia First political party) were planning on blowing up infrastructure and distributing propaganda to smooth the way for a Japanese invasion.

That real plot was almost identical to the fake story Sydney Ross was spouting. So, understandably, the New Zealand government took Ross seriously and passed him on to the head of the newly formed Security Intelligence Bureau, a British MI5 agent called Major Kenneth Folkes.

Fortunately for Ross, Folkes had a vested interest in believing that this fake Nazi story was true.

“He wanted more power,” says Beverly,“and of course if his department was going to do all this rounding up it would need to be far bigger”.

Within weeks of the pair meeting, Folkes sent a letter claiming he’d verified the Nazi conspiracy was real.

With regard to the meeting I had with you on Sunday afternoon, investigations prove that the story we heard has substance. The matter is developing slowly and is leading to a clique already under notice.

Further developments will be reported to you immediately.

But Ross’s story was fake, so how could Folkes have corroborated it?

Sherwood Young thinks Folkes was making it up. “He is certainly making a high pitch at a very early stage based, essentially, on his own hope.”

Folkes and the SIB encouraged Ross to expand his hoax, setting him up in Rotorua under the alias of Captain Calder of the Merchant Navy. During this time Ross gave the SIB a list of alleged conspirators, including Alfred Remmers, who Ross claimed was the mastermind of the Nazi plot.

The SIB wrote up this evidence in binders and Folkes wrote increasingly urgent letters to the Prime Minister with details of the supposed conspiracy. 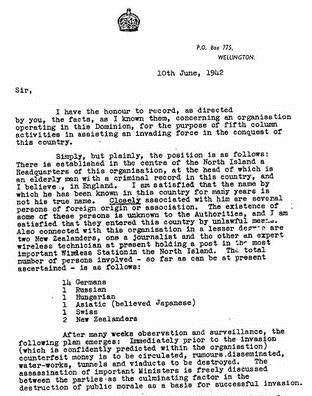 But when Ross visited SIB headquarters and flicked through the binders of ‘evidence’ he saw something astonishing.

“The books contained Ross’s inventions in full,” says Beverly Price, “but these genuine notes comprised only about a third of the entries. The remaining two thirds had been added by other hands, and it had to be the SIB! Nobody else had access [to the binders]”.

Beverly thinks the SIB were sneakily adding extra details to the hoax to make it sound more convincing and Sherwood Young says this suspicion was backed up by the view of the Police at the time.

“Fraser said to Jim Cummings ‘have a look at this, tell me what you think,’ and Cummings says ‘Well Prime Minister, I don’t believe this story and I certainly doubt it’s Ross’s story. This whole thing has been blown right out of proportion and I’m looking squarely at Folkes for it.’”

Sherwood and Beverly think the SIB made one last desperate attempt to convince the Prime Minister the hoax was real. They think the SIB told Ross to fake his torture at the hands of the Nazis to make it look as if the interference of the police had blown his cover.

But their efforts failed to convince Peter Fraser and Ross confessed his part in the scheme after being taken into police custody.

Major Folkes left the country in disgrace and the SIB was disestablished.

Listen to the full Black Sheep podcast to hear how the Police smeared Major Folkes by leaking the story to the press, and for more details on how Ross spent his time as “Captain Calder” in Rotorua.