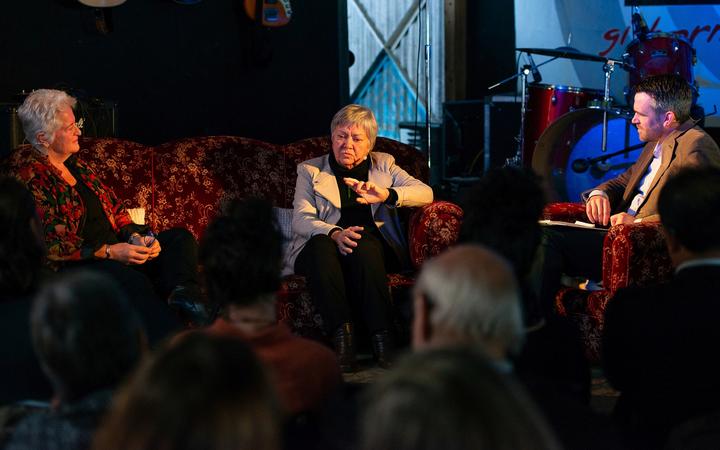 An extract from the third of a series of four panel discussions marking theTuia 250 ki Tūranga commemorations of first contact between European and Māori, recorded on location in Gisborne's Smash Palace.

Gisborne residents Dr Jill Chrisp and Karen Johansen are not only partners who share a household, but have whakapapa which intertwine in unexpected ways. Jill is from a prominent settler family which arrived in the Tūranga/Gisborne area in the 19th century. Her great-great-grandfather was harbourmaster responsible for destroying the iconic rock Te Toka a Taiau, an event fiercely opposed by the Rongowhakaata iwi to which Karen belongs. That their outlook is so diverse is a realisation which has sometimes struck without warning.

A book telling the story of Gisborne was launched a few years ago and as I sat through the launch and I looked at the content, I realised that there was very little about who I was. I didn't recognize most of the people. And that's because mostly it was a Pakeha history. There was a lot about the Chrisp family in there as pioneer settlers (and quite rightly so.) And on the way home, Jill noticed that I was very quiet.

I was totally excited because I was there in the pages. We were driving along Riverside Road [after the book launch] and we got halfway along and I thought “Why are you so quiet?” And we suddenly realised that our experience of this book of this history was entirely different. The ‘aha’ moment there was, I had assumed that we would come to that experience from the same space. We've been living together by them for 5, 6, 7, 8 years, but I didn't see this one coming. 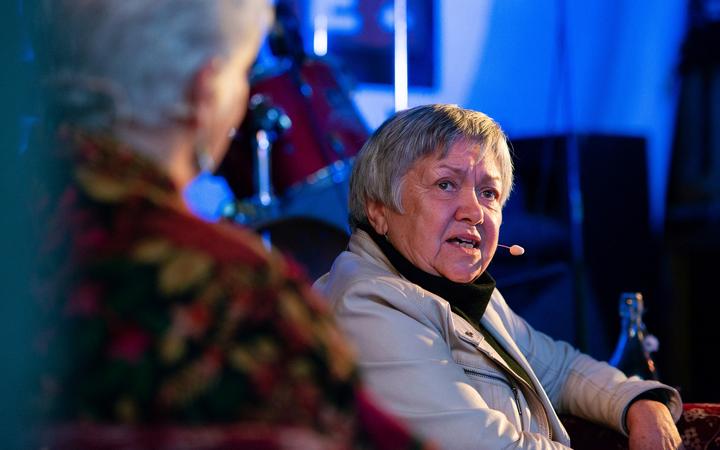 It was a lack of stories. And that's why we're here today. Actually my life is full of silences. I'm not just a Rongowhakaata woman. I'm descended from a Pakeha settler as well.

In 1813, a woman called Maora Pani was born at Muriwai. And when she was in her early 20s there was discussion that a war party would go up north by waka. And she demanded that she should go. That permission was denied. The waka set out next morning and half a mile out to sea the sailors discovered Maora Pani hiding in the waka. So they threw her overboard and because she was a very strong swimmer, she swam back to shore. There are many stories of how intrepid she was. The woman was my great-great-grandmother.

She went on to marry Thomas Halbert, the Pakeha settler and she gave birth to my great-grandfather Thomas Matawai Halbert, who married the daughter of Wi Brown (who was a Mahaki rangatira at the time). [When she had just been born], the siege of Waerenga-a-hika pā took place and that had cataclysmic results, involving a lot of people being killed and wounded, and the confiscation of 1.2 million acres of land in Tūranga. 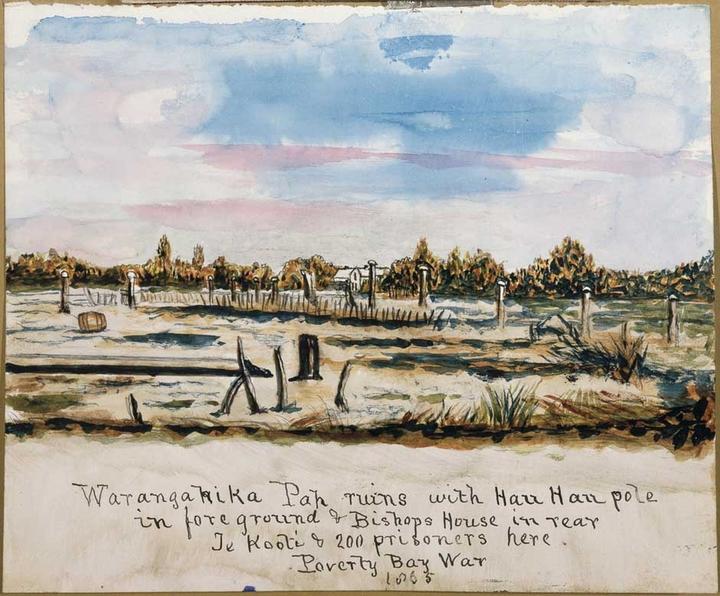 An 1865 painting of the remains of Waerenga-a-Hika pā, with the house of Bishop Williams behind. Photo: NZ History

I don't know what happened to her as an infant, but I think when she married Thomas Matawai Halbert they made a decision that the only way they were going to survive was to become as Pakeha as possible.

They had the resources to be able to do this. And so the children were sent to the Melbourne Conservatory of Music. Thomas drove around in a very beautiful car. They dressed very nattily, they were busy in Anglican Church affairs.

And when my grandfather came home from World War One having survived Gallipoli, he came home with an English bride, and they had my mother Eirene.

In turn, she was raised to say, “I'm a little English girl.” But all her life there was a sense of not being really anchored and when I came along, I kept asking questions: "Why can't I find out about these stories? Why don't we visit aunty So-and-so or Nanny So-and-so? Why don’t we?” I asked my koro, “What's that language you're speaking in Gladstone Rd in town?” I was told “Nevermind, darling. Don't you worry about that.”

And so, here I am with Paheka settler and Rongowhakaata Maahaki manuhiri, entwined. And I feel on the edge really. I've been trying to find that place myself most of my adult life. The effects that it's had on the decisions I've made as an adult and the work I have done have been profound. 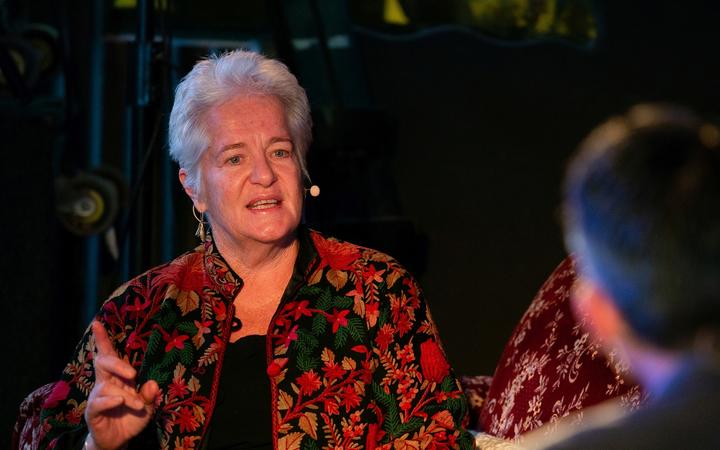 It's interesting hearing Karen because the [my] parallel story is planted very much here in Tūranga, in Gisborne. The first of my ancestors that came was my great-great-grandfather Thomas Chrisp who arrived here in 1874, becoming harbourmaster.

For him, economic development meant trading. He didn't bring that in as tangata whenua were trading all over the place. But there was an increasing number of people who wanted to trade, using bigger and bigger ships.

And he saw that the harbour needed to be extended in order that these ships didn't continue to breach. The insurance companies were getting brassed off for paying out on wrecked ships. So a whole series of rocks were blown up, including the Te Toka a Taiau which is an incredibly important symbol for this place [for tangata whenua]. That's where Cook and Karen's whanaunga met each other. And deaths happened on that place.

My stories have come from what Anne Salmond has called the ship's perspective – Cook's stories, my great-great-grandfather's, have been the ones that have been written and told and valued and believed. I had the absolute privilege to listen to the other story about Te Toka a Taiau. To be able to from those for whom it was a body blast when that rock was blown up. It's hugely impactful.

And the issue remains live, as the Eastland Port in Gisborne has plans to destroy what is left of Te Toka a Taiau in a further expansion of facilities for shipping. That arguments are being heard now on both sides is an indication that changes have occurred to the old, Pakeha-dominated Gisborne which Jill and Karen knew when growing up. 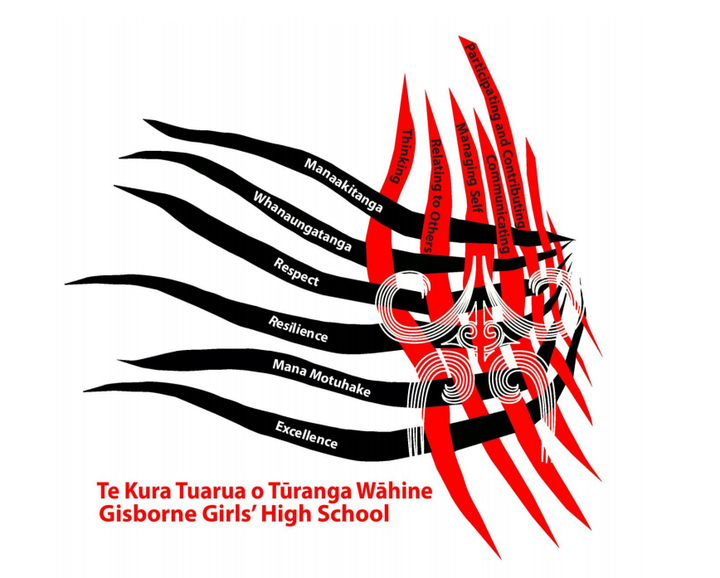 And Karen recalls a moment in her educational career when the old and the new worlds touched, for an “aha” moment. Sparks would result from this live encounter.

When I principal of Gisborne Girls’ High School, we had our 50th anniversary. And 500 or so 600 women responded, most of them were my generation. We had this huge powhiri. And then everybody came into the tent where there were to be cocktails and talk and everything else.

But I wanted to mihi them and so then I went up on the stage and started my mihi. And I realised that the my generation was starting to talk with one another. Senior students were looking aghast as the noise got louder and louder. Two sentences into my first paragraph. “I said, I surrender. I give up. I've lost them,” amid huge embarrassment from everybody else.

But we went on cocktailing and talking and this woman came up to me who’d become extremely wealthy, digging up coal in Australia. And she planted herself in front of me, declaring "I was going to give the school a whole lot of money. But I don't recognize this as my school any longer."

And it was an “aha” moment for me because I replied “I'm thrilled, actually, that you don't recognize the school as being yours any longer. Because that was 50 years ago. And I hope that things have changed.”

And that's how I talked with the staff and with the school when we were back in business on next Monday morning. We've made huge changes. We haven't finished but we are making a difference. 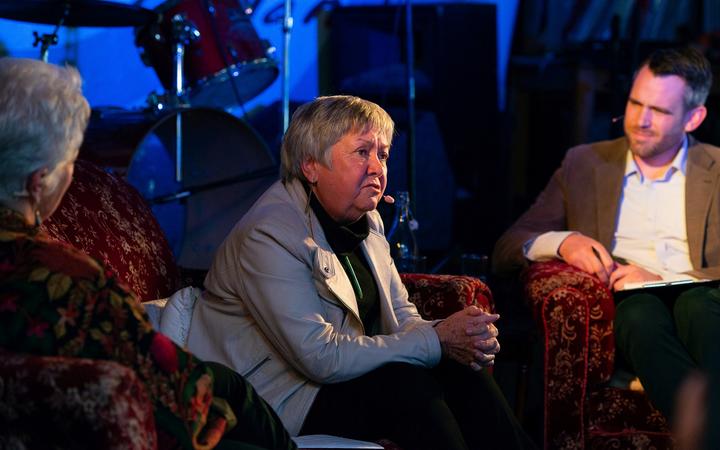 Jill, a descendant of a prominent Tairāwhiti settler family and the grand-daughter of the former Gisborne harbour master responsible for destroying the iconic rock ‘Te Toka a Taiau’ and Karen, a Rongowhakaata woman have spent a lifetime having awkward conversations and navigating the tricky realities of their respective families, histories and lived realities. Both Jill and Karen are highly respected community educators, having held senior roles at the New Zealand Human Rights Commission, and are life partners.

In association with the Te Ha Trust, and the Tuia 250 Ki Tūranga /Gisborne programme of public events in October 2019