US east coast communities face "epic amounts of rainfall" from tropical storm Florence, which has been linked to at least 12 deaths. 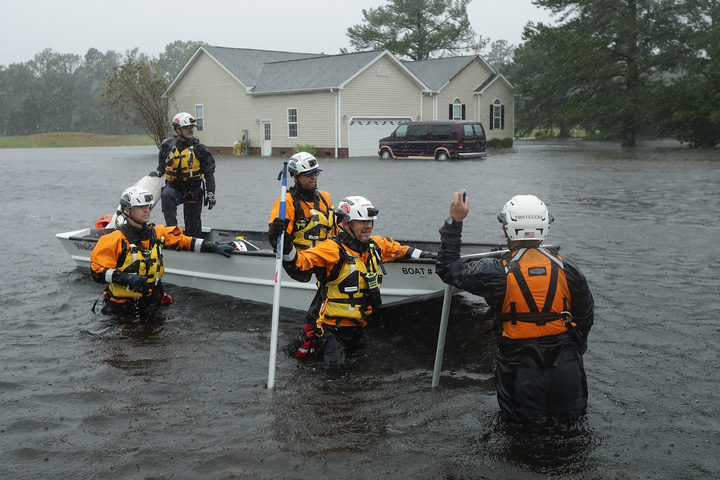 Florence has caused catastrophic flooding since arriving as a category one hurricane on Friday.

Some towns have already seen 60cm of rain in two days, with totals forecast to top 1m in places.

It is feared that more communities could become deluged as the storm crawls west at only 3km/h.

"This system is unloading epic amounts of rainfall, in some places measured in feet and not inches," North Carolina Governor Roy Cooper said on Saturday.

He urged against residents attempting to return home, warning that "all roads in the state are at risk of floods".

A disaster has been declared by US President Donald Trump in eight counties in North Carolina - a move that will help free up federal funding for recovery efforts.

The president may travel to the region next week, the White House says.

What do we know of the victims?

US media say 12 people have died as a result of the storm.

Among the fatalities in North Carolina:

In South Carolina, a 62-year-old woman died when her car hit a tree that had fallen across a road in the town of Union.

Two others died in the state from carbon monoxide poisoning caused by a generator inside their home, according to a local coroner.

The storm in numbers

How bad is the damage?

The storm is still leaving a path of destruction across the two states, despite its top sustained wind speeds weakening to 72km/h.

About a million customers in the two states are without power, the New York Times reports. 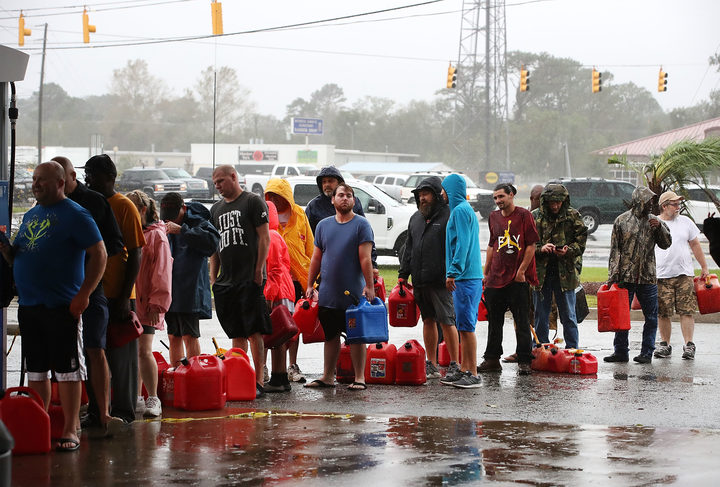 People wait in line to fill up their gas cans at a gas station that was damaged when Hurricane Florence hit Wilmington, North Carolina. Photo: AFP

In Fayetteville in North Carolina, officials warned people living by swollen rivers that the worst was yet to come.

"If you are refusing to leave during this mandatory evacuation, you need to do things like notify your legal next of kin because the loss of life is very, very possible," Mayor Mitch Colvin said.

Scores of residents had to be rescued from flooding by emergency responders and volunteers in New Bern, North Carolina, on Saturday.

Colleen Roberts, city public information officer for the area, told BBC World News more than 4,000 homes had been "destroyed or completely damaged" there, based on calls they had received for emergency services.

"That's preliminary at this point. And we have 300 businesses that are damaged or destroyed."

Where is the storm heading now?

The centre of the storm moved slowly westward on Saturday across the Carolinas, bringing further heavy rain and flooding, the US National Hurricane Centre says.

It is expected to weaken gradually as it moves inland, heading northwards through the Ohio valley by Monday.

The Federal Emergency Management Authority said motorists should not attempt to drive through floodwaters.