The US government has reopened an investigation into the 1955 murder of a black 14-year-old boy whose death galvanised the civil rights movement. 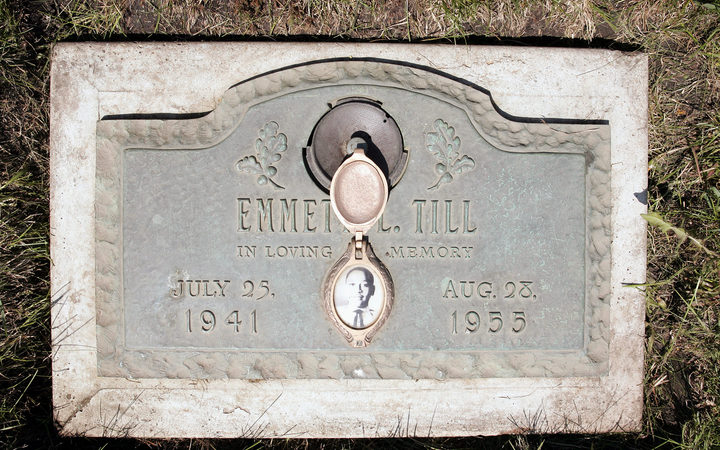 A photo of Emmett Till is included on the plaque that marks his grave site at Burr Oak Cemetery in Aslip, Illinois. Photo: AFP

A Department of Justice (DOJ) report stated the agency had received "new information" about the Emmett Till case, but offered no further details.

Till was murdered in Mississippi after a white woman accused him of making lewd remarks and touching her.

A recent book quoted the woman as admitting she lied in her testimony.

The DOJ investigation was announced to lawmakers on 26 March, but has come to light this week after a report by the Associated Press.

It is unclear what new information prompted the government to reopen the case, but a book published last year, The Blood of Emmett Till by Timothy B Tyson, had said Carolyn Donham, the white woman who testified against Till, admitted she lied about the teenager's actions in 1955 during a 2008 interview.

"Nothing that boy did could ever justify what happened to him," Mr Tyson's book quotes Donham, now in her 80s, as saying.

In a letter to a US lawmaker last year, Acting Assistant Attorney General T E Wheeler II had said that the DOJ was "assessing whether the newly revealed statement could warrant additional investigation", the Clarion-Ledger reported.

In memory of #EmmettTill and thousands of other black men, women & children lynched, we must finally pass anti-lynching law. https://t.co/KCE0pGq4ln

Till's cousin Deborah Watts said she had not known about the reopened investigation until Wednesday, the AP reported.

She said the news was "wonderful" but did not want to say anything further to jeopardise the investigation.

The Till case had been closed in 2007 after authorities reported all suspects were dead.

The 2018 report on Emmett Till is the seventh submitted to Congress, according to the Emmett Till Unsolved Civil Rights Crime Act of 2007.

The act requires the attorney general to conduct an annual study of unsolved civil rights crimes and report any findings to Congress. In 2016, the act was extended for an additional 10 years.

The DOJ report says that Congress "has stressed" its desire for the department to "continue its efforts to bring justice, wherever possible, to unsolved civil rights cases".