There has been an explosion at the US embassy in Montenegro, officials say. 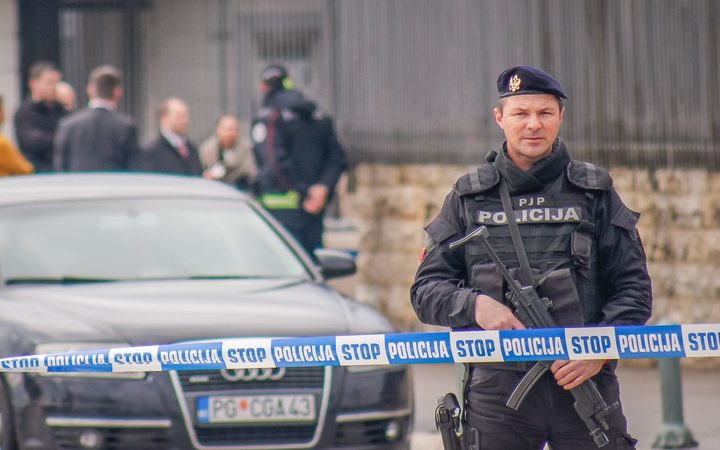 Police guard the site where an explosive device was thrown at the US embassy in Podgorica, Montenegro. Photo: AFP

An attacker threw an explosive device into the compound in the capital Podgorica at around midnight (local time), before killing himself, the government said.

Local media have named a Serbian-born local resident as a suspect, but this is unconfirmed by authorities.

The government said the device thrown was likely a hand grenade. No other injuries have been reported.

The US embassy said all staff were safe.

There has been no indication of a motive.

The BBC's correspondent Guy Delauney said many people in the Balkans still have weapons such as hand grenades - a legacy of the wars in the 1990s.

The embassy and surrounding streets remain closed, but people working nearby said the police presence is small and the overall atmosphere in the city is calm.

Montenegro, home to about 630,000 people, became independent in 2006 - one of several new countries formed after the dissolution of the former Yugoslavia.

However, the country has faced recent instability. In 2016, anger over attempts to join NATO, coupled with opposition claims of corruption against the then-prime minister, sparked mass protests ahead of a general election.

Many Montenegrins resent the alliance bombing their country and Serbia in 1999 in a bid to end the killing of ethnic Albanians in Kosovo.

On the day of the election itself, the government arrested a group of men for allegedly plotting to murder Milo Đukanović and to launch a coup to prevent the Nato membership bid.

Montenegro has charged 14 men for the coup attempt. Two Russians among them remain at large.

Russia has denied any involvement in the incident. The country vocally opposed Montenegro joining NATO before it became the alliance's 29th member in June 2017.

The West and Russia are vying for influence in the Balkans, and earlier this month the EU released plans to extend membership to Balkan countries in the near future.