Colombia has announced a plan to eradicate vast crops of coca leaf, the raw material for cocaine. 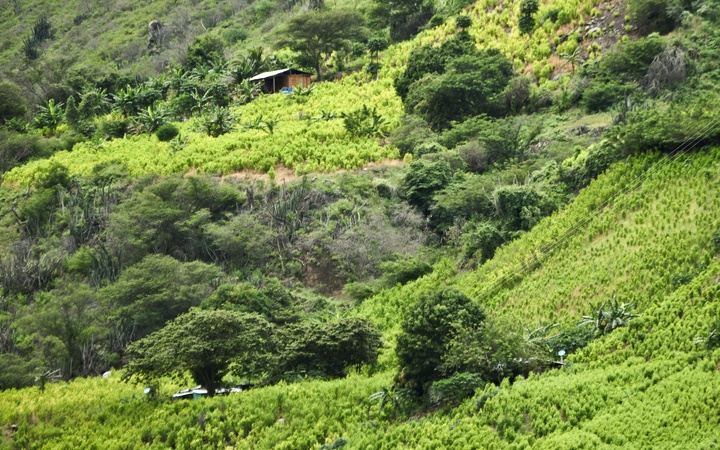 A coca field covers a hillside in a rural area of Policarpa, Colombia, as shown in this photo taken on 15 January. Photo: AFP

The FARC rebel group relied on cocaine production to fund its insurgency, and controlled much of the industry.

But a joint programme between rebels and the government will offer farmers monthly payments if they voluntarily destroy their crops.

They will also be offered loans and guidance to plant alternatives such as fruit trees and cacao.

The crop substitution programme was agreed as part of Colombia's peace accord, which was finally ratified in December.

The Colombian official responsible for the programme, Rafael Pardo, said the government would invest $US340 million, which would benefit 50,000 families.

The government has set a goal of destroying 100,000 hectares of coca this year, and has yet to rule out other methods to bring coca levels down.

But the preferred strategy appears to be winning over the estimated 64,000 peasant families dependent on the coca trade.

"This is much more cost-efficient and furthermore ensures that territories are transformed and people's lives are changed," Mr Pardo said.

Each family would receive a monthly stipend of about $US350 as well as loans, subsidies, and technical assistance.

The programme is supported by FARC and will initially focus on 40 municipalities responsible for more than half of Colombia's coca production.

During the armed conflict, the rebel group initially taxed farmers producing coca in areas under its control, but eventually dominated trafficking in those areas.

As the group leaves these regions to comply with the peace accord, the concern is that other armed groups including paramilitary and other crime gangs will try to replace them and take over the trade.