Republicans in the US House of Representatives hope to offer President-elect Donald Trump an alternative plan to his proposed US-Mexico border wall. 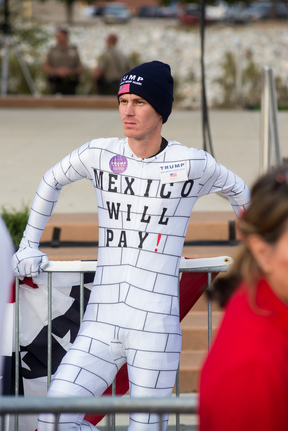 A Donald Trump supporter at a rally before the Republican won the White House. Photo: AFP

It would be a first test by lawmakers from Mr Trump's own party of one of his key campaign promises.

The plan would involve more border fencing and additional border staffing with federal agents, many of whom belong to labor unions that supported Mr Trump's candidacy, the aides told Reuters.

Double layers of fencing would be extended along parts of the roughly 3200km border, rather than constructing a brick-and-mortar wall, according to the proposal.

A House Republican aide and a Department of Homeland Security official said a wall was not realistic because it would block visibility for border agents and cut through rugged terrain, as well as bodies of water and private land.

The House aide said House Republicans working on the alternative plan were waiting for Mr Trump's transition team to be put in place before setting a date for the meeting.

A spokesman forMr Trump did not respond to a request for comment on the lawmakers' proposal or their desired meeting.

Mexico said on Wednesday that it would not pay for a border wall, as Trump has pledged.

If Congress stands up to Trump, his wall may end up being a fence extension, said Steve Legomsky, professor emeritus and immigration law expert at Washington University School of Law. 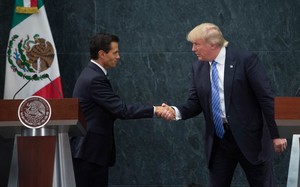 "Congress won't fund the kind of wall Trump promised, and Mexico won't pay for it. But to save face, President Trump and congressional leaders will likely agree to a modest extension of the existing border fence," Mr Legomsky predicted.

Immigration was a central feature of the Trump campaign, focusing on concerns among some voters about illegal immigrants and perceptions they take jobs and pose security risks.

Senate Majority Leader Mitch McConnell told reporters on Wednesday that border security was an important agenda item that he wanted to achieve "in whatever way is the most effective."