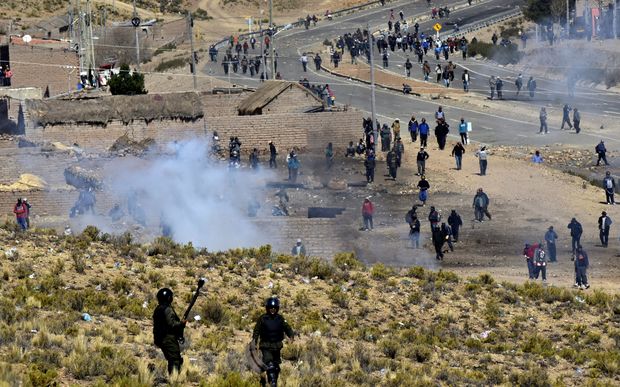 Riot policemen and miners clash in Panduro, in the La Paz district of Bolivia. Photo: AFP

Rodolfo Illanes was found beaten to death earlier this week after being kidnapped by miners demanding more mining concessions, the right to work for private companies, and greater union representation.

The miners have been blocking a highway in Panduro since for almost a week. They have been hit by the global commodities downturn and want the government to relax environmental restrictions and raise subsidies.

The National Federation of Mining Cooperatives of Bolivia, once strong allies of the President, Evo Morales, began the "indefinite protest" after negotiations failed.

One of the three men accused of Mr Illanes' murder is Carlos Mamani, president of the National Federation of Mining Cooperatives, who organised protests and a roadblock in Panduro, south of La Paz.

The government said Mr Illanes had approached protesters at a roadblock in an attempt to open a dialogue when he and his bodyguard were seized.

While he was being held, Mr Illanes told Bolivian radio that a condition for his release was that the government negotiate with miners over new legislation.

Interior Minister Carlos Romero said "all indications" were that Mr Illanes had been murdered in a "cowardly and brutal" attack. La Razon newspaper quoted Defence Minister Reymi Ferreira as saying Mr Illanes was beaten to death.

More than 100 arrests had been made, he said.

Riot policemen and miners clash in Panduro, in the La Paz district of Bolivia.

A miners' union said two men were killed during clashes with the police for the control over roads in Bolivia.

Military honor guards carries the coffin of deputy interior minister Rodolfo Illanes during his wake at the presidential Quemado Palace in La Paz, on August 26, 2016. Bolivian President Evo Morales said Friday there was a "political conspiracy" against his government after protesting miners allegedly kidnapped, tortured and beat to death deputy minister Illanes who tried to negotiate with them.