Search crews have rescued a 72-year-old survivor of Ecuador's deadly earthquake nearly a fortnight after it devastated the South American country. 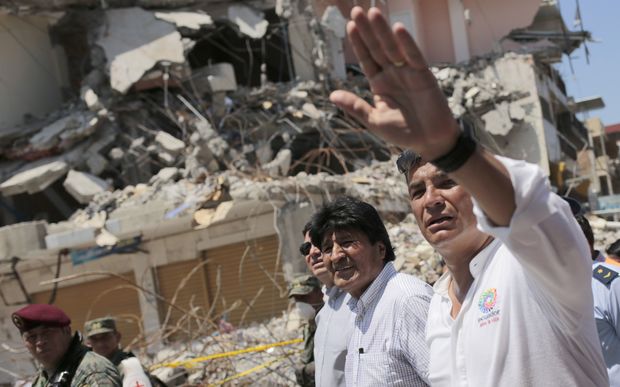 A visiting Venezuelan team found Manuel Vasquez, who had been trapped under rubble since the 16 April quake, the Venezuelan embassy in Quito said on its website.

The massive 7.8 magnitude earthquake struck the northern Ecuador coast about 100km north-west of Portoviejo at a depth of 10km.

The jolt killed 660 people and injured more than 12,000, and was followed by hundreds of aftershocks.

The quake was the worst to strike Ecuador in decades, causing buildings to collapse and damaging roads and other infrastructure in tourist areas along the coast.

Mr Vasquez was admitted to hospital with kidney trouble. He had lost toes and was also dehydrated and disoriented.

Ecuador welcomed hundreds of rescue teams, doctors, nurses, firefighters and other support staff from many countries after the quake.

President Rafael Correa has announced a series of drastic economic measures, including temporary taxes on those outside quake hit areas, aimed at paying for the estimated $US3 billion cost of rebuilding the shattered country.

The quake was a particularly severe blow to the tourism sector, coming just as the government was launching a major push to attract more tourists.