Malcolm Turnbull will be sworn in as the 29th prime minister of Australia after defeating Tony Abbott in a Liberal leadership ballot.

Mr Turnbull won a party room vote 54-44 last night, after a tumultuous afternoon in which he condemned Mr Abbott over a series of controversial decisions and failing to deliver business confidence. 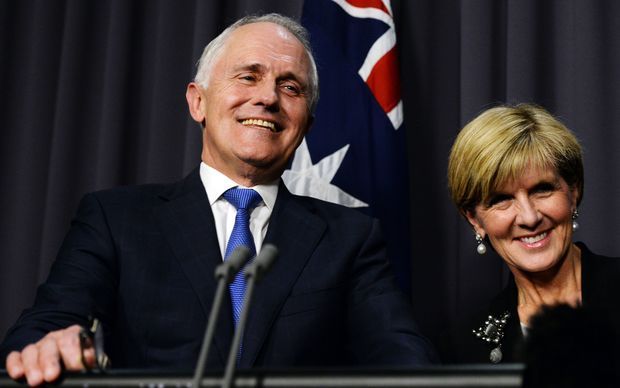 Julie Bishop will stay on as deputy leader after defeating Kevin Andrews 70-30.

Mr Turnbull said he would seek to "persuade" rather than "lecture" the Australian people and would lead a "thoroughly Liberal government" committed to freedom, the individual and the market.

"We need to have in this country, and we will have now, an economic vision, a leadership that explains the great challenges and opportunities that we face.

"We can handle those challenges, seize those opportunities and ... in a manner that the Australian people understand so that we are seeking to persuade rather than seeking to lecture." 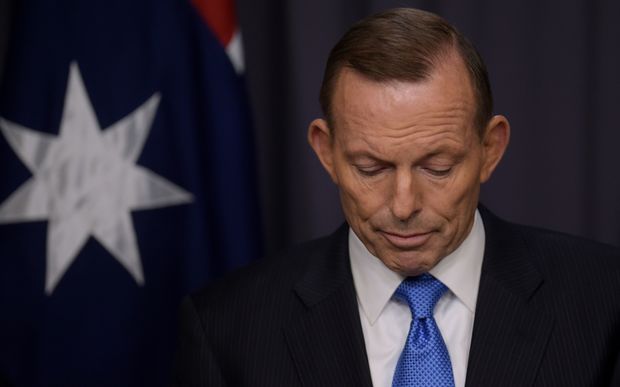 What had been backroom grumblings about Mr Abbott's leadership for months came to the boil around midday yesterday when Ms Bishop approached the prime minister to ask him to stand aside.

After parliamentary question time, Mr Turnbull approached Mr Abbott and asked for a leadership ballot - which went ahead at 9.15pm after hours of number-crunching.

However, Mr Turnbull - who has consistently polled as the preferred Liberal leader - said the party could only win a second term under new leadership.

After winning the late night ballot, the prime minister-designate paid tribute to Mr Abbott, who delivered the Coalition victory at the 2013 election.

"The burden of leadership is a very heavy one," said Mr Turnbull. "Tony has discharged that as leader of the party and, of course, as prime minister over many years now and the achievements of the Government that he has led have been formidable."

Mr Turnbull said the culture of his leadership would be thoroughly consultative and one that made decisions in a collaborative manner.

His government would follow the example of good governance of New Zealand prime minister John Key, he said, by explaining complex issues and making a case for them.

"To be a successful leader in 2015 you have to be able to bring people with you by respecting their intelligence."

Once Malcolm Turnbull is sworn in, Australia will have in place its fifth prime minister in eight years.

Labor's Kevin Rudd, elected with a strong mandate in 2007, was deposed by his deputy, Julia Gillard, in 2010 amid the same sort of poll numbers that Abbott is now facing. Ms Gillard was in turn deposed by Mr Rudd ahead of elections won by Tony Abbott in 2013.

Mr Turnbull, a former Rhodes Scholar, multi-millionaire former tech entrepreneur and barrister, shot to international fame in the 1980s by successfully representing retired MI5 spy Peter Wright in his battle with the British government to publish the book Spycatcher.

He entered politics in 2004, becoming environment minister in the Howard government. In 2009 he was ousted as leader of the Liberal Party by Tony Abbott. Though he considered quitting politics altogether in 2010, he changed his mind, returned to the frontbench and became communications minister in Mr Abbott's government.

"Australia does not need another out of touch, arrogant, Liberal leader. Australia needs a change of government," Mr Shorten told reporters in Canberra.

Australian political commentator and journalist Michelle Gratton said Mr Turnbull had been very ambitious for the job for many years.

Ms Gratton told Morning Report the party had been behind in the polls for some time and feared it was heading for a defeat in next year's election.

While the leadership vote was close, she said, its members will have to show unity.

"The party now does face the reality, it has a new leader, it's a leader that's been installed because the Liberals want to win next year's election, and really they can't afford not to unite.

"However in the short term, things will be pretty rough and tough."