Prime Minister John Key's #ponytailgate travails appear to have struck a popular chord with overseas media and their readers. 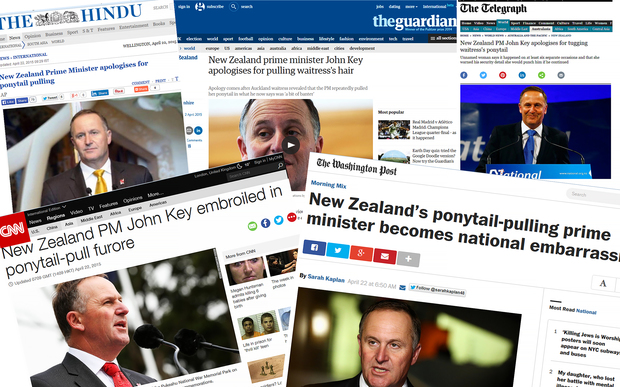 Mr Key admitted he did repeatedly pull waitress Amanda Bailey's ponytails at a restaurant, describing it as 'horsing around', though she compared it to school-yard bullying.

The Washington Post called it the latest controversy for Key, who had previously come under fire for gaffes ranging from joking about cannibalism to "mincing" on a catwalk. But the paper said "ponytailgate" might be the most bizarre yet.

CNN said New Zealand's leader seems to have gone from premier to playground bully, and related details of how the Prime Minister apologized to the waitress after she complained about his behaviour in a blogpost. CNN said this began during last year's election campaign.

London's Daily Telegraph said the woman whose hair was pulled said it happened on at least six separate occasions and that she warned his security detail she would punch him if he continued.

The Daily Mail began its coverage by quoting the woman as saying, 'Please stop or I will actually hit you'. 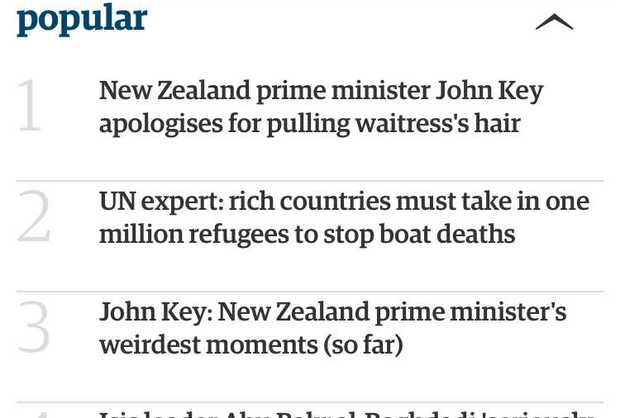 The story was the most popular on the Guardian's website overnight, with a secondary story third most popular. The Guardian said the Prime Minister apologised after repeatedly pulling her ponytail in what he now says was 'a bit of banter'. The paper said John Key apologised over the allegations by the woman. It went on to say politicians were routinely upbraided for behaviour befitting a school-yard, but the New Zealand prime minister has now become embroiled in a controversy that centres, quite literally, on hair-pulling.

The Hindu newspaper said the Prime Minister apologised to a cafe worker who said he'd repeatedly pulled her ponytail when he visited the cafe near his home over a period of months, even after she'd told him to stop.

The story also appeared in The Toronto Star, Bloomberg, The Irish Independent, The Australian Financial Review, The Japan Times, the BBC and elsewhere.