Six Greenpeace activists have come down from an oil rig in the Pacific Ocean after six days living on the structure, to protest against drilling in the Arctic. 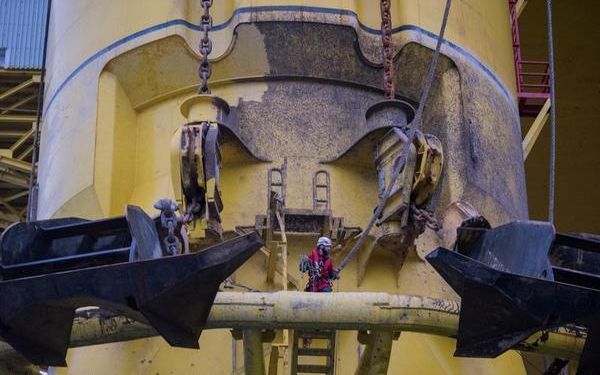 The multinational team climbed aboard Polar Pioneer, an oil rig leased by Royal Dutch Shell drill rig that is bound for the Arctic, on Monday as it was being transported by a heavy-lift vessel about 1210 kilometres northwest of Hawaii.

Worsening weather conditions that were expected to bring high swells led the six activists to leave the oil rig on Saturday, a Greenpeace representative said in an email.

They climbed down into inflatable boats and returned to the Greenpeace ship Esperanza, which had been stationed in the area in recent days and which had brought the activists out into the Pacific Ocean for the protest.

Shell said the protesters had jeopardized their safety and that of the crew assigned to the oil rig.

The company had filed a complaint in federal court in Alaska seeking an order to remove the activists. On Saturday evening, a judge granted a restraining order against Greenpeace to prevent a repeat of the protest, Royal Dutch Shell spokeswoman Kelly op de Weegh said in an email.

"We're always open to an honest discussion about the challenges and benefits of exploring for energy in the Arctic, but we cannot condone Greenpeace's unlawful and unsafe tactics," she said.

Greenpeace said its team of activists did not interfere with the crew transporting the oil rig. The organization had earlier said on its website that the activists had enough supplies to last for several days on the rig.

"I might be climbing off this oil rig, but this is merely a transition into the next step of saving the Arctic," American Aliyah Field, one of the six activists, said in a statement.