Hundreds of troops have been deployed in Sierra Leone and Liberia as the death toll from an outbreak of a deadly virus climbed to almost 900 in West Africa.

The Ebola outbreak began in February this year in the forests of Guinea, where the toll continues to rise, but its epicentre has since shifted to neighbouring Liberia and Sierra Leone. The death toll in the three countries has reached 887 and up to four cases have now been reported in Nigeria. 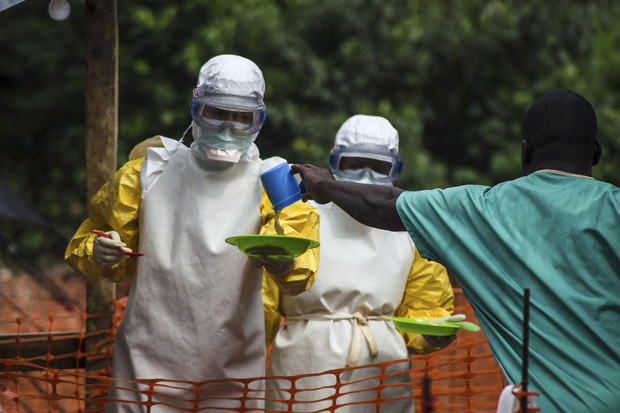 Last week Sierra Leone, Liberia and Guinea imposed tough measures, including the closure of schools and the quarantine of the remote forest region hardest hit by the disease.

Large convoys of military trucks are ferrying troops and medical workers into Sierra Leone's far east, where the density of cases is highest.

Military spokesman Colonel Michael Samoura said the operation, code-named Octopus, involved about 750 military personnel. Troops would travel to isolated communities to implement quarantines, healthcare workers would be allowed to come and go freely, and the communities would be kept supplied with food.

In neighbouring Liberia, President Ellen Johnson-Sirleaf and ministers held a crisis meeting on Sunday to discuss a series of anti-Ebola measures as police contained infected communities in the northern Lofa county.

Police were setting up checkpoints and roadblocks for key entrance and exit points to those infected communities, with nobody allowed to leave quarantined communities. Troops were fanning out across Liberia to help deal with the emergency.

A Reuters witness in the Liberian capital Monrovia said several clinics were spontaneously closing their doors as doctors were too afraid to treat patients. More than 60 doctors have already died of Ebola, hampering efforts to control the outbreak.

Highly contagious, the deadliest strain of the Ebola virus can kill up to 90 percent of those infected, though in the current outbreak the rate is running around 55 percent. Symptoms initially include muscle pains and joint aches, though they worsen to vomiting, diarrhoea and internal and external bleeding in the final stages.

With healthcare systems in the West Africa nations overrun by the epidemic, the African Development Bank said on Monday it would immediately disburse $50 million to Sierra Leone, Liberia and Guinea as part of an international effort to contain it.

The World Bank says it is giving up to $US200 million of emergency funding to the countries improve their public health systems and tackle the economic impact of the virus.

World Bank president Jim Yong Kim said said Ebola is wrecking already weak health systems in Africa. "This money will go for very basic support for medical supplies and medical staff, and also to help with people who are facing economic hardship as a result of this epidemic."

Medical charity Medecins Sans Frontieres (MSF), which normally spearheads the fight against Ebola, has only a small team in Liberia and says it does not have the capacity to increase it.

Experimental tests in US

Two Americans are being treated with an experimental serum. A third man returning from West Africa who walked into a New York hospital with a fever is being tested for Ebola.

One of the world's leading immunologists says he hopes to develop a vaccine for the Ebola virus by the middle to end of 2015. Testing on humans is expected to start in September.

Dr Anthony Fauci, director of the US National Institute of Infectious Diseases, says if those trials show the vaccine is safe and effective, it may go into production.