An unfinished overpass has collapsed in the Brazilian World Cup host city of Belo Horizonte, killing at least two people and injuring 10 more.

Television images showed part of a passenger bus crushed under the overpass and news website G1 said another two trucks and a vehicle were also smashed. 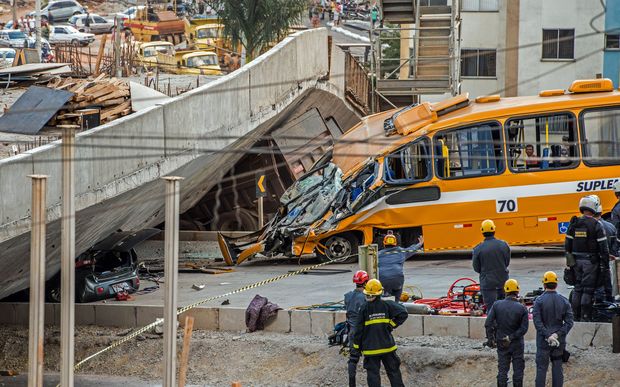 Firefighters and police officers at the site of the collapse. Photo: AFP

A spokeswoman for the Minas Gerais state health department said two people died and 19 were injured in the collapse on Thursday. A fire department spokesman said one person was trapped in a car, and possibly more.

The accident site is around 3 kilometres from the Mineirao stadium, where a World Cup semi-final match will be held next Tuesday, Reuters reports. The stadium has already hosted five games.

The cause of the collapse was unclear. The overpass was part of a network of bus lanes that Brazil planned to have ready for the World Cup, but was not finished on time. The bridge was to be used for passenger buses.

"We were traveling normally and then there was a terrible noise," Renata Soares, who said she was on the bus at the moment of the accident, told GloboNews TV. "I am sure that more people in other cars were underneath the debris."

Heavy government spending on the World Cup and long delays in finishing promised infrastructure projects have spurred violent street protests in Brazil over the past year, although they have died down in recent weeks. 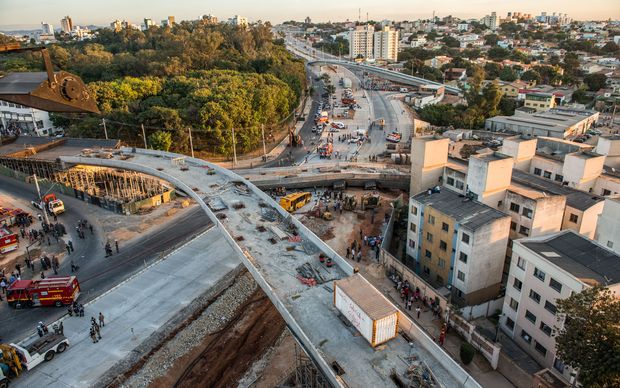 The overpass for a network of bus lanes in Belo Horizonte had not been finished in time for the World Cup. Photo: AFP