Some of the tallest trees in the world are under threat from poachers who have found an unlikely target - huge wooden knots, or burls, which grow in ancient redwood trees in northern California. 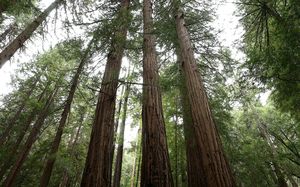 The giant knots can be cut up, polished and sold for thousands of dollars as tabletops.

Parts of the Redwood National and State Park have been closed off since a 400-year-old tree was cut down, the BBC reports.

More and bigger burls are being taken near former logging towns where the economy has collapsed.