Thailand's military will tighten its grip on power on Sunday as it moves to stamp out any protests and to rally commercial agencies and business to revitalise the country's battered economy.

The military has detained leaders of the ousted government including former Prime Minister Yingluck Shinawatra, and an unknown number of her ministers, party officials, and supporters. 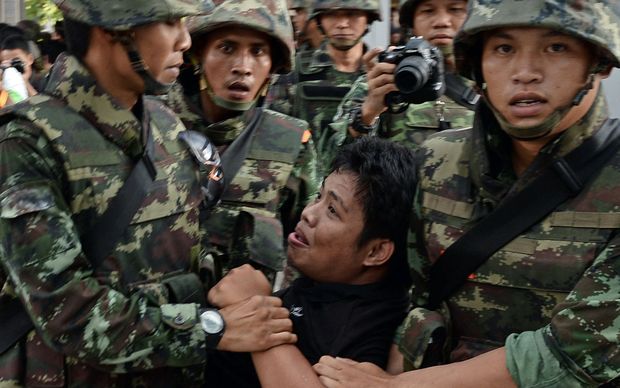 Soldiers remove an anti-coup protester from a gathering in Bangkok on Saturday. Photo: AFP

Reuters reports it has thrown out the constitution, censored the media and dismissed the upper house Senate, Thailand's last functioning legislature.

Eighteen newspaper bosses have been summoned to appear on Sunday, presumably to receive directions on supportive coverage.

The military has also called meetings with the leaders of state and private commercial organisations as it seeks to get the economy performing again.

Power now lies squarely in the hands of army chief General Prayuth Chan-ocha and his junta known as the National Council for Peace and Order.

"From now on, the army will focus on solving the country's problems," a senior military official said on Saturday.

"The army would like to be in power for the shortest period they can. They want to make sure the country is really getting back to normal without any resistance," said the official, who declined to be identified.

Amnesty International says it is increasingly concerned about human rights violations in Thailand as the army extends its post-coup crackdown.

Under the new regime, civil liberties have been drastically curbed, most of the constitution abrogated, and rival political protesters cleared from Bangkok's streets.

Politicians and activists have been detained and the military has granted itself the power to arrest people without warrant, saying order is needed after months of turmoil.

Amnesty's Asia-Pacific director Richard Bennett said there had been widespread violations of international rules regarding freedom of expression and association since the army took over on Thursday.

Mr Bennett told Radio New Zealand National's Sunday Morning programme the military appeared to be cracking down on any kind of alternative views.

Several hundred protesters took to the streets of Bangkok on Saturday to show their anger at military's seizure of power, defying a ban on large gatherings.