Colombia is in mourning for 33 children who died in a bus fire on Sunday. 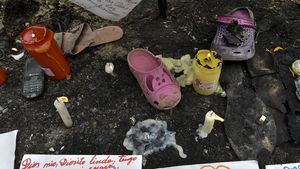 Candles among the debris of the burned bus. Photo: AFP

The children burned to death when the bus caught fire while returning from an event at an evangelical church near the city of Fundacion in northern Colombia.

The BBC reports the latest death was on Monday.

Fundacion is about 750km north of the capital, Bogota.

Prosecutors said they would charge the driver and a church leader who chartered the bus with manslaughter.

One survivor said the fire started when the driver refuelled the bus from a jerry can, when a spark ignited the fuel. Two of his own children were lost in the tragedy