Turkey has ended rescue operations following a devastating coal mine explosion, after retrieving the bodies of the last two miners believed missing.

The final toll from the explosion in a coal mine in the western town of Soma on Tuesday was believed to be 301.

Energy Minister Taner Yildiz said there were no miners left underground and the rescue operation was carried out to completion. 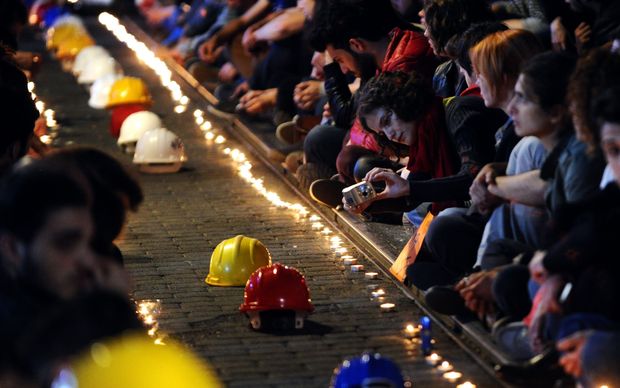 A candlelit vigil was held in Istanbul in honour of the victims. Photo: AFP

A fire in a nearby part of the mine complex had hampered rescue operations earlier in the day but had been brought under control, he said.

Protesters have clashed with police near Soma as the disaster continued to cause outrage, fuelled by claims of negligence against mine operators and what many see as a heartless response from the government, AFP reports.

Embattled Prime Minister Recep Tayyip Erdogan has denied any government culpability in the face of opposition MPs' claims that they raised concerns over safety at the Soma mine in parliament just weeks before the disaster.

But his comment that mining accidents are in "the nature of the business" have sparked furious accusations of indifference to the victims' plight.

A preliminary expert report on the accident, obtained by the Milliyet newspaper, pointed to several safety violations in the mine, including a shortage of carbon monoxide detectors used to alert authorities, and ceilings made of wooden planks instead of metal, which caused the fire to spread quickly. The report's authenticity could not be immediately verified.

He has faced fresh criticism after video emerged of him apparently shouting an anti-Israel slur at angry protesters during a visit on Wednesday to the disaster site.

News agency DHA has said there was just one safe room for 6500 miners at Soma.

The mine's holding company said on its website that the mine had been inspected every six months, most recently in March, and nothing had been found amiss.

The Soma explosion and fire is the world's deadliest mine disaster in nearly 40 years.