European foreign ministers are meeting to discuss the crisis in Ukraine, where the authorities have launched a crackdown on pro-Russian separatists.

Austria hopes backing will be given to this month's presidential election at the Council of Europe summit in Vienna.

It comes a day after Ukrainian security forces began an "anti-terrorism operation" in the country's east, the BBC reports. 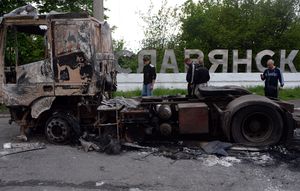 People walk past a burned truck near the eastern Ukranian city of Sloviansk. Photo: AFP

Interior Minister Arsen Avakov said four soldiers and an estimated 30 separatists had been killed near Sloviansk in the assault. Some reports have put the total of pro-Russian deaths at 30.

Mr Avakov said that up to 800 well-trained militants armed with large-calibre weapons and mortars were hiding among civilians in the town, where government buildings had been seized and checkpoints set up.

A Russia Today reporter in Sloviansk said checkpoints manned by gunmen were being reinforced, and nervous residents were stocking up on supplies of food and water.

AFP quotes the interior ministry in Kiev as saying the pro-Russian gunmen were using civilians as human shields and shooting from houses, some of which were ablaze.

The BBC said the defence ministry had confirmed that a helicopter was shot down near Sloviansk.

The crew of the aircraft survived, largely because the helicopter crashed into a river, the ministry added.

Pro-Russian militants have seized government buildings in a dozen or more Ukrainian cities in the east.

Kiev accuses Moscow of supporting and arming the gunmen - a claim denied by the Kremlin.

On Sunday, Ukrainian Prime Minister Arseniy Yatsenyuk accused Russia of executing a plan "to destroy Ukraine and its statehood".

Russia warned on Monday that failure to halt the escalating unrest would threaten peace across Europe, reports the BBC.

However, NATO's top military commander meanwhile said he did not think Russian troops would enter eastern Ukraine, predicting Moscow could achieve its goals through other means, AFP reports.

General Philip Breedlove also said it was too early to say whether Russian special forces were firing missiles at Ukrainian helicopters.

At least three helicopters have been shot down in the past week.