Government forces in South Sudan have retaken the oil town of Bentiu. 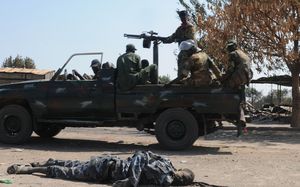 They overran a rebel base in a major offensive to take Bentiu, which the rebels captured last month.

At that time, hundreds of civilians were massacred.

Bentiu, in the north, has changed hands several times since fighting broke out in South Sudan last December after President Salva Kiir accused his former deputy, Riek Machar, of plotting a coup.

Mr Machar denied the charges, but then mobilised a rebel force to fight the government.

The BBC reports the power struggle between the two men - who fought together in the civil war before South Sudan's independence - has increasingly taken on an ethnic dimension.

Mr Kiir is a member of the country's largest tribe, the Dinka, while Mr Machar is from the second-biggest, the Nuer.

The UN has about 8,500 peacekeepers in South Sudan, which seceded from Sudan in 2011.