The Israeli government has suspended peace talks with the Palestinians after the reconciliation of rival Palestinian factions. 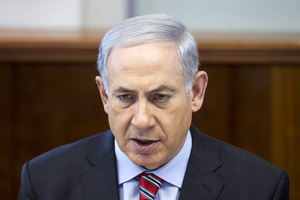 The decision was announced after a meeting of the security cabinet chaired by Prime Minister Benjamin Netanyahu. The meeting lasted six hours.

Fatah and Hamas said on Wednesday they had agreed to form a new unity government, seven years after their rift over control of Gaza.

Mr Netanyahu told the BBC that Fatah leader, Mahmoud Abbas, the president of the Palestinian Authority, could "have peace with Israel or a pact with Hamas - he can't have both".

He said Israel would only resume peace talks with Palestinians "when they decide to abandon the course of terror".

"As long as I'm prime minister of Israel, I will never negotiate with a Palestinian government that is backed by Hamas terrorists that are calling for our liquidation," he added.

The peace talks resumed last July after a gap of three years.

The BBC reports the negotiations were already close to collapse. Tuesday is the deadline for a final agreement set last summer.