Sherpa climbers aided by helicopters are searching for three missing guides after an ice avalanche swept the lower slopes of Mount Everest, killing at least 13 in the deadliest accident on the world's highest mountain.

The avalanche came down on an area riddled with crevasses and piled with seracs - massive ice boulders or columns that can break free without warning. 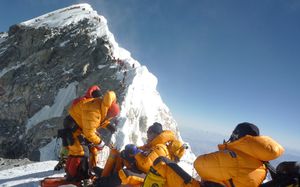 A group of mountaineers approach the Hillary Step in May 2009. Photo: AFP (file)

Although relatively low on the mountain, climbers say it is one of the most dangerous points on Everest.

The Nepalese Sherpas caught in the avalanche were among a large party of Sherpas carrying tents, food and ropes on an early morning expedition before the main climbing season which starts later this month

The Ministry of Foreign Affairs and Trade has confirmed that no New Zealanders were caught up in the deadly avalanche.

As many as 16 are thought to have died in the disaster on Friday - at least 12 Nepalese mountaineering guides were killed and four others are still missing.

Three of the Sherpas killed in the avalanche were working for a New Zealand-based adventure tourism company.

Wanaka company, Adventure Consultants, was leading six climbers from various countries on the mountain, and the expedition leader is a New Zealander, also from Wanaka.

General manager, Suze Kelly, says its Nepali guides were carrying tents, food and fuel up from a base camp and were right in the path of the avalanche while negotiating the most dangerous part of the trek.

Ms Kelly says the company has worked closely with the Sherpas for two decades and the climbing party is devastated.

She says it's not clear if the expedition will continue.

It was the first major avalanche of the 2014 climbing season. Nearly 250 people have died on Everest, which is on the border between Nepal and Tibet.

The previous worst toll occurred in 1996 when eight people were killed over two days during a storm.