The Queen has presented money to pensioners at the traditional Royal Maundy Thursday service. 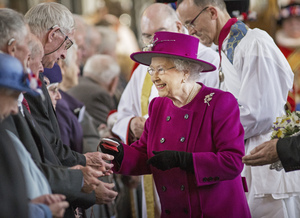 The annual service, which dates back more than 800 years, took place this year at Blackburn Cathedral in Lancashire. Hundreds of well-wishers lined the streets outside to welcome her and the Duke of Edinburgh.

The Queen commemorates Maundy by offering "alms" to senior citizens - retired pensioners recommended by clergy and ministers of all denominations - in recognition of their service to the church and to the community.

The Maundy service, which dates back to the 13th century, originally involved the sovereign giving money to the poor and washing their feet, a tradition which ended with James II in the 17th century.

During the service the Queen distributed the Maundy money to 88 men and 88 women - one for each of the Queen's 88 years. Each recipient received two purses, one red and one white.