The governor of the Syrian city of Homs is giving reassurances that men of fighting age who have left the besieged Old Town are being fairly treated.

More than 350 men have been sent to a screening centre. Talal al Barazi says 111 men have been questioned and released, while 190 others are still being held. Thirty-four will be taken to court to face charges of fighting against the government, murder or avoiding military service.

The United Nations says it is monitoring those being held. "Some of them have moved on following their screening to a suburb outside of Homs. We following up with them and providing them with much more assistance. They're all in pretty bad shape," UN refugee agency spokesperson Melissa Fleming said.

But Mr al Barazi said the freed detainees have been well treated.

"Those men have been cleared of suspicion. This morning at 10 their problems were solved and they had the right to go wherever they wanted and were given the rights of any Syrian citizen. No obstacle was put in their path whether to stay or to travel."

The United Nations Security Council has been debating a Western-Arab draft resolution that would demand humanitarian aid access to besieged areas in Syria.

However, Russia said on Wednesday it would veto the resolution in its current form and has denounced the draft as an effort to lay a foundation for military strikes against President Bashar al-Assad's government, Reuters reports.

Moscow had already dismissed the Western-Arab draft as a non-starter. But a senior diplomat's unequivocal condemnation indicated that Russia would seek major changes before dropping its opposition. 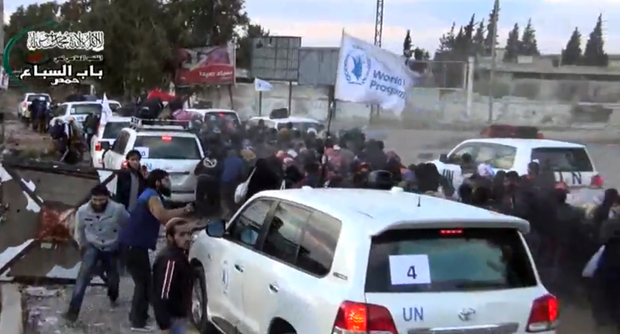 An operation to evacuate civilians from besieged rebel areas in Homs is suspended for a day because of logistical problems.

Governor Talal al Barazi gave few details on Tuesday, but said the evacuation of civilians and the delivery of food aid will continue on Wednesday.

Under a deal brokered by the United Nations, the Syrian Red Crescent and UN agencies started to evacuate civilians from Homs and deliver food and medicines on Friday.

An initial three-day truce was extended for a further 72 hours from Monday, but no deliveries or evacuations took place on Tuesday.

Rebel areas of the central city have under a blockade for some 600 days. Nearly 1200 civilians have been evacuated since Friday.