China and Taiwan have begun the highest-level talks since the end of the Chinese civil war in 1949.

Wang Yu-chi and Zhang Zhijun, the top cross-strait officials from each side, are attending the four-day talks in Nanjing which began on Tuesday. 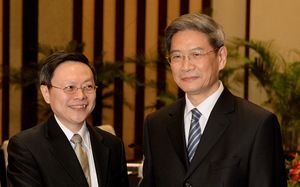 Taiwanese officials said they would raise press freedom after Beijing denied access to some media outlets.

Beijing is likely to push Taiwan to pass a free trade deal that is currently stalled in parliament, the BBC reports.

Speaking to reporters before leaving Taiwan, Mr Wang, the head of Taiwan's Mainland Affairs Council, said: "My main aim during this visit to the mainland is to promote mutual understanding between the two sides."

Mr Wang said he hoped the visit, which "did not come easily", would go smoothly, and said the sides would not be signing any agreements during the talks.

Given the sensitivities, the meeting room had no flags on display, and the officials' nameplates had no titles or affiliations, AFP news agency reported.

China insists that Taiwan is a part of its territory and has a stated aim of reclaiming the island.

Taiwan calls itself the Republic of China and nominally claims the same territory as the Communist government in Beijing, although it does not press these claims.

The United States is committed to defending Taipei, despite not formally recognising Taiwan as an independent nation.