Emergency officials in Tonga say up to 90% of houses have been destroyed in the villages hardest hit by Cyclone Ian but, so far, only one fatality has been confirmed. 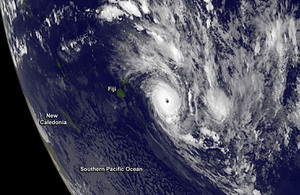 The National Emergency Management Office estimates about 5000 people have been left homeless by the category five cyclone, which hit the Ha'apai island group on Saturday with winds of up to 280km per hour.

The office's director Leveni Aho says communications to the islands have been cut and they are relying on images taken by a New Zealand Air Force Orion plane.

Mr Aho says power has been cut to many islands and the office hopes a relief flight can reach them in the next 12 hours.

The Ha'apai airport's control tower has been destroyed but the runway is intact.

Mr Aho says part of the roof of the local hospital has been torn off but there are no reports of serious injuries.

He says the priority is to restore communications, treat the injured, and restore clean water and sanitation to prevent disease outbreaks.

She says a Tonga Red Cross branch officer who was assessing homes in a town near Pangai found that out of around 27 houses only four homes still had their roofs on.

High Commissioner in Tonga Mark Talbot says photos and videos taken by the crew onboard the Orion will provide a good picture of damage and show where aid is needed most.

New Zealand Civil Defence Co-ordinator Ian Wilson is in Tonga to assist the emergency services there. He says getting around the cluster of islands, which are home to over 8000 people, has been the priority.

Mr Wilson says two of Tonga's navy vessels are calling at each island and making an assessment as to the need and condition of those islands.

He says it looks likely most communities were prepared and made it to shelter before the storm hit with initial feedback from the islanders that there is damage and buildings have suffered, but that locals seem to be alright.

Leveni Aho said the cyclone was the strongest in 50 years and it was fortunate the centre of the storm was small, or there would have been widespread destruction throughout all the islands.

The cyclone bypassed Tongatapu, the most populated island, which escaped damage.

The New Zealand government announced on Sunday it will immediately contribute $50,000 in aid.

Foreign Affairs Minister Murray McCully said further support will be considered as the full extent of the damage becomes clear.

Wellington Tongan Community president Kolovula Murphy said many people are worried about the wellbeing of their families and properties in Ha'apai.

She said their anxiety is being made worse by the lack of communication.

The Red Cross is worried that many people may not have access to necessities such as drinkable water. It says there may also be damage to crops and medical clinics.