My Year with Helen isn't a story of defeat - it's one of strength. Gaylene Preston tells Katie Parker why. 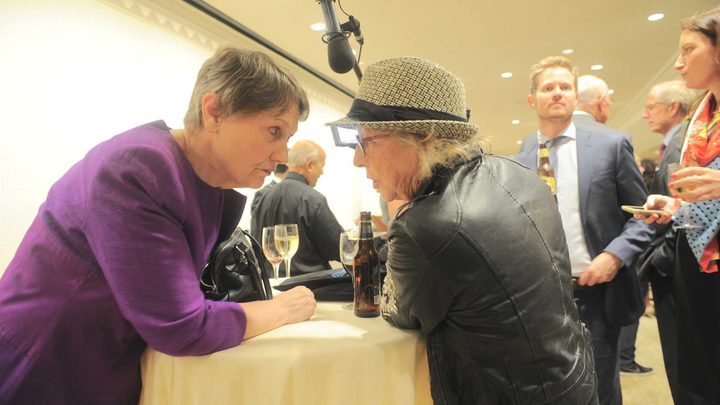 Helen Clark chats to Gaylene Preston during the filming of My Year with Helen. Photo: NZ International Film Festival

When Helen Clark announced that she would be putting herself forth as a candidate for the role of Secretary General of the UN in April of last year, many assumed she was a shoe-in. After all, how could Helen - our very own Aunty Helen, who became the first elected female prime minister and went on to become the third highest ranking member of the UN - possibly lose?

But then a lot of things didn’t go as expected in 2016. Brexit passed. Donald Trump was elected. And Helen, along with six other women in the running to be the UN’s first female secretary general, was ultimately unsuccessful and stepped down from her role as head of the UNDP not long after.

“Helen is resilient”, Preston tells me of her subject’s ability to keep on keeping-on, even when faced with seemingly immovable power structures.

“She's taught me a lot about resilience, just being alongside her for this journey.”

As one of New Zealand’s leading filmmakers - and a female one at that - Preston herself knows a thing or two about resilience. With a career forged on giving voices to the voiceless and advocating for equality in an industry that is, in many ways, still very much a boy’s club.

When, in 2015, Preston began the project, she did not yet know she would be spending the next year with Clark, or even that there would be a campaign for her to become UN Secretary General. What she did know was that, in the face of a pretty grim global state of affairs, Clark seemed relentless in her efforts to effect change in the world.

“I was feeling a bit depressed,” she recalls. “You sit at home and listen to the news and it all sounds a bit hopeless. So I thought, 'Why is Helen Clark so positive?’”

She decided she had to find out - and so, with the help of a Film Commission grant, she set off with Helen on a country trip to Botswana where the two attended a meeting of women leaders.

It was there that she heard a comment made by one of the women: “We are punished for being the mothers of the human race.”

It struck a chord with her. She realised that this is what her film would be about.

“Now, you might think that's a funny thing to decide when Helen isn't a mother,” explains Preston. “It's not a personal thing about Helen.”

“But it is a very important thing about women, and she is a female global leader - and what extra load does she have to carry as that?”

When the following year, under Preston and her camera’s watchful eye, Clark announced that she would be campaigning to become the first female Secretary General of the UN, the answer to this question began to become clear. 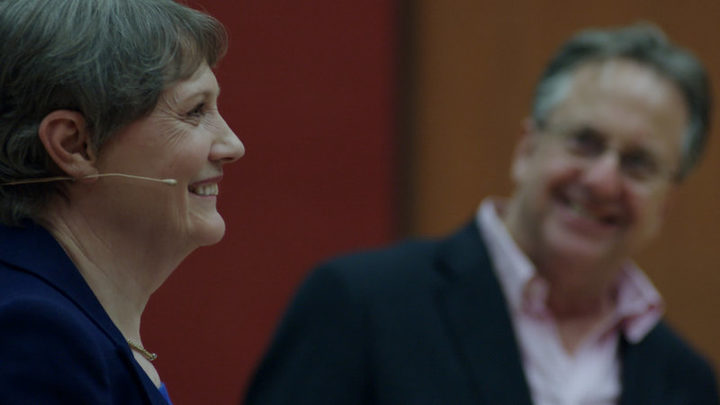 Looking back on the year that followed, Preston is not necessarily surprised by what happened in Helen’s campaign.

“The winds of change blow through occasionally and then they blow away, and you can wonder what was gained,” she says.

Helen is one of these visionary women - and that, Preston says, makes some people uncomfortable.

“She's clearly got a metaphorical screwdriver in her top pocket and she knows how to just do this and that and make those wheels turn a little bit better.”

For those who have found their place in the status quo, then, this is naturally threatening.

“You're going to see somebody wandering around with a screwdriver in their top pocket as somebody who might arrive as your boss and upset your apple cart considerably,” Preston says.

For most New Zealanders this woman, the one with the screwdriver in her top pocket, will be familiar. But My Year with Helen is also a portrait of a woman who, for all the time she has lived her life in public, we know surprisingly little about.

Some of the most interesting and revealing moments in the film show her not in all her UN glory, but in her personal space. Particularly fascinating - and utterly charming - are the scenes in which Helen spends time with her father George at his modest home in Waihi Beach.

Though brief, these scenes are telling, and it is evident that the two are very close with a connection that indicates not only a familial bond but a shared intellectual wavelength.

What’s more it speaks to the duality that is so often expected of women: one moment the two are discussing politics, the next Helen is explaining her practice of cooking a year's worth of meals in one huge batch and freezing them in margarine containers for George to eat for dinner.

For a woman seen by some as doggedly career-oriented, it is strangely poignant to see her perform this caring role. With a tenderness and warmth rarely revealed in public, it is striking to think that these two sides - the traditional femininity of a caregiver role and Helen’s public persona as a visionary woman - can still be considered at odds.

“It's a double standard, and it's not something that's required of men,” Preston says of the way female leaders are expected to repress and conceal qualities traditionally considered feminine.

“It’s nice to be able to make a documentary that actually rounds out the picture.”

Going into the film, of course, one is already aware of the outcome. After all the many briefings and meetings and debates and polls Helen navigates, seemingly pitch-perfectly, the job of Secretary General is given to former Prime Minister of Portugal, António Guterres. Helen stepped down from her role as head of the UNDP, the patriarchal order apparently undisturbed.

Yet, even in spite of this and the fact that the other six qualified women who also went for the SG job went, as Preston says, “down in a steaming pile”, My Year with Helen is not disheartening.

Instead, there is something defiant about the film, a refusal to let the significance of this moment - and the antiquated, gendered connotations underlying it - be excused. In documenting this moment in time, a moment that in hindsight felt on the cusp of an era in which women’s and minority rights are under seemingly constant siege, Preston holds the system that allowed it to account. And, if the initial success of the film is any indication, that is something people want.

As the first film to sell out a screening in the New Zealand International Film Festival, My Year with Helen has hit, it seems, at just the right time. Preston can barely contain her delight.

“I've never made a film that's sold out The Embassy Theatre ﻿in a day. Oh my God!" she laughs, before adding wryly: “So that's the first indication there could be what they call 'a bit of interest'.”

And what of the reaction of its subject? Preston recalls showing Clark an early rough cut.

“Helen arrived with a great big notebook, a new one, twice the size of that" - she gestures to my palm sized reporter's notebook - "sat down, got her pen out, said to me "I'm just giving comment for factual accuracy aren't I?”

“Within two minutes she'd written two things. I thought ‘oh my goodness this is gonna be a very long screening.’”

But then, “miraculously” Preston says, Clark put her pen down and just watched.

“And she said, ‘you've captured an inglorious moment. But the 'her-story' must be told.’”

My Year with Helen is currently screening as part of the New Zealand International Film Festival.