There have been eight deaths related to synthetic cannabis in just over a month. People know it's killing them. So why are they smoking it? 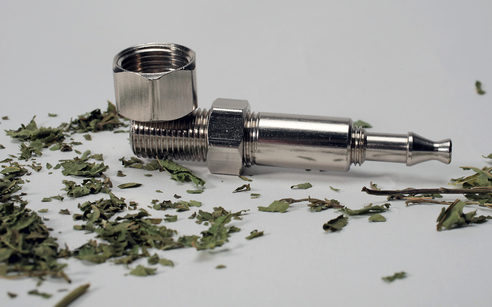 Synthetic cannabis has a distinctive smell, I am told. Not like weed, tobacco or incense.

I’m speaking to two men in a carpark near Myers Park. One is tall and clean cut. The other is a bit shorter and wears a flat peak cap.

They’re holding half-empty bottles of booze they found while rifling through the bushes a moment earlier. Flat Peak cap takes a swig from a bottle of Tui.

“Walk down Queen St and you’ll find someone smoking it. Put your notebook away and sit next to them. You’ll see what it does real quick,” Clean Cut says.

Today, an eighth death tied to the use of synthetic cannabis was confirmed in Counties Manukau. A man in his mid twenties died in hospital overnight. He was being treated after using the drug.

Last month, seven deaths in Auckland were linked to the use of illegal synthetic cannabis. The name of this drug is misleading. It’s not cannabis, but inert, dried plant matter sprayed with unknown psychoactive chemicals.

Chief Coroner Judge Deborah Marshall said there had also been a "significant" number of non-fatal cases where people have been hospitalised after using the drug.

Police say they have found a potentially lethal compound called AMB in synthetics in the past, but the substance, or substances that are causing people to die at the moment are unknown.

I take Clean Cut’s advice, and walk down Auckland CBD’s busy main street. Soon enough, I notice a strange smoky fragrance coming from a group of four men standing around a woman. She’s hunched over on the pavement outside a Starbucks.

She’s dressed nicely, in black patent brogues with lace frills around the tops of her white ankle socks, a black mini-dress and a long, grey woollen coat. Her black, curly hair is cropped short and dyed blonde. She’s swaying slightly.

Three of the men leave while the fourth flags down a taxi, and helps the woman up. He pushes her towards the back seat and gets in the front, but she doesn’t move, she just stands there, her feet in the gutter, her body slumped inside the cab. She’s struggling to move, like a newborn giraffe.

Pedestrians walk past, cars honk at the taxi. The man gets out and tries to push her in, but he can’t. I ask if I can help. He graciously accepts, and we drag her onto the pavement. She is deadweight. I try to put her down gently, and end up on the ground with her slumped sideways over me. Her head rolls, she is only semi-conscious.

“Is she on synthetics?” I ask the man. He nods.

After a minute her eyes open, and she focuses on my face. She says she thinks I’m beautiful. Her teeth are covered in lipstick, she’s young - early 20s. I try to get out from under her, but my movement frightens her. She passes out, and I wriggle into a squat. Queen St is busy, but no one is helping us.

Some time passes and she opens her eyes. The man asks if she can get up, she takes his hand and stumbles onto her knees. She grabs for her bag, and turns her head to look at me.

“You’re a crazy fucking bitch,” she mumbles, as she swings it into my face.

St John Ambulance service medical director Tony Smith told RNZ they were being called out up to 20 times a day to help people who had taken the drug. Some experienced seizures, others lost consciousness. A few have had heart attacks.

When staff arrive at the scene, Smith said drug users were often still unconscious. “As they regain consciousness it’s common for them to have very disturbed and violent behaviour.”

No one seems to know - or is able to say - what it is that is causing people to die. The Wireless asked ESR what testing has been done, and what it’s revealed, but the Crown research institute was unable to comment on cases which were before the Coroner.

“At this stage we have not been able to confirm a link between synthetic cannabis and the deaths reported in the media last week. Further analysis is underway,” a spokeswoman said, via email.

Rumours on the street about what’s killing people vary, according to the two men I speak to near Myers Park.

“I don’t know what’s in it - butane, ketamine, rat poison,” Flat Peak Cap says. “It’s strong. I used to smoke it but I don’t no more. I passed out a couple of times.

“You can buy a bag of it one day, and it’s fine, and the next bag you buy might be 10 times stronger. Like a lucky dip. It’s a gutter fucking drug. You might as well be sniffing glue.”

They know it’s killing people. They know it’s bad. But it’s cheap, it’s strong, and it’s easier to get than cannabis. “Like walking into the dairy and buying a loaf of bread,” Clean Cut says.

Neither the Auckland City Mission or Lifewise would grant The Wireless permission to speak to their staff or volunteers who work directly with users of the drug, many of whom are homeless.

“No one sets out when they want to get high, to end up being dead,” he says.

But he admits that education and warnings wouldn't solve the problem of new, more dangerous compounds entering the market. And there will always be people who ignore the risks.

“It’s not just people on the street, it’s also young people. You can tell them this is really risky, but will that stop them using it? It’s not clear cut.”

In South Auckland, Carmen Hetaraka and Hone Ngata know of children as young as eight years old smoking synthetics. They say kids not much older are selling the drugs.

Hetaraka, a cultural advisor for the charitable trust, says the situation is “heinous.” Ngata, who works as an alcohol and drug counsellor in a youth justice facility, calls it frightening.

“My experience is they will take anything they can get … They can’t get away from it. It gives them income, it gets them high. It can be a social thing with their friends - some of them don’t play rugby and volleyball or kapahaka - they do drugs.

“Who’s gonna turn down the opportunity to make money selling drugs? They’ve got no income and mum and dad aren’t around.”

Hetaraka says these kids know it can kill them, “but they’re after the high, and they’ll take the risk. People will do anything for the high. It’s a substitute for deeper issues - they want to be sedated.”

He said he would like the organisation's work in the community to be aimed at making people feel good about themselves.

“There’s always something that causes people to use those drugs. But at the moment we’re dealing with the symptoms. So everyone’s running around with towels trying to mop up an overflowing bathtub, when really we need to stop the tap. And the tap is about getting principles and values to make our young people feel good about their identity.”

Matt Bowden, dubbed by media as the godfather of New Zealand's legal high industry, is a former meth addict who became a successful lobbyist for the party pill industry.

He developed and sold legal highs as an alternative to black market drugs like ecstasy and MDMA, before moving into the production of synthetic cannabis in 2011. The drug was sold over the counter at dairies and other stores across the country, some people got extremely high off it, the media freaked out, and in May 2014 it was banned when the Psychoactive Substances Amendment Act came into effect. The amendment also banned the testing of recreational drugs on animals.

In 2015, Bowden put his company into liquidation and moved to Thailand. He says the blanket ban of all synthetics and of animal testing means the law doesn’t work, and last month’s deaths were preventable.

“It should have been rats that died.”

At the same time, Bowden says the law “empowered the black market”.

“We know there are millions of different molecules which act at the cannabis receptors. But as all the safer bets and more benign molecules were banned, the more dangerous ones came to the fore and eventually the dreaded day arrived when some quite lethal compounds hit the market.

Wilkins says legalising cannabis is not a silver bullet solution to the problem caused by unknown synthetic substances, but it is something worth considering.

“If cannabis was more easily available, it would take away the demands for these kinds of products.

“When we say synthetic cannabis, it actually means literally dozens of different compounds which have nothing to do with natural cannabis at all.”

Wilkins says the risk profiles of the psychoactive compounds vary massively, and strength varies from batch to batch, due to black market manufacture not being controlled.

Chris Fowlie of cannabis law reform group Norml says there will will always be some people around who will just take whatever drug is going. But he thinks it’s mostly disadvantaged people smoking synthetics.

“If it is among homeless and disadvantaged people, then you’re more in that market for glue and butane and associatives - the market for getting completely out there. The vast majority of people wouldn’t touch them.”

They’d rather drink the mystery yellow substance inside an old tequila bottle they’ve found in the bushes at a carpark near Myers Park.