What goes on in North Dunedin?

Last week I went to Dunedin for the very first time. While I was there, I found myself being told rape jokes and grinded on by a kid who been drinking for nine hours.

On the street I’d felt at ease, but the drunken kid at the flat left me nervous about what could be brewing under the surface.

I was in the city to investigate whether the student quarter was as bad as I’d heard. Reports in local media had described it as looking “like the Third World”, with couches burned in the street, glass smashed and party-goers who would drink to oblivion.

In North Dunedin, it doesn’t take long to find people to talk to. Students wander the streets to and from university, they sit in front on their houses to drink, and the doors to their flats stay invitingly open.

Although only the boys seemed keen to chat. The girls I met just sat quietly and listened.

I started on Hyde Street and was told by some residents: “It’s not even that bad here. Have you been to Castle Street yet?”

Castle Street is something of a legend. Once the finishing line for the Undie 500, and the scene of riots from 2006 to 2009, in recent years authorities have tried to clampdown on anti-social behaviour there.

But the street’s reputation as “party central” lives on.

Last month the band Six60 played a surprise show at their namesake flat on Castle Street to a crowd of about 500. The event made headlines when a 20-year-old student was admitted to hospital with a concussion after falling trying to climb onto a roof.

Rude not too. 660 Castle St. Album out tomorrow ✌️

One-half of Castle Street North, closest to the university campus, is tidy. Most of the buildings there are owned by the university and at least 18 properties are leased to international students.

The second half is home to uni and polytech students who rent flats that seem way too expensive for the condition they’re in.

The road is covered with holes caused by fires melting the asphalt. There are scorched patches of concrete where couches have been burned, and piles of glass and cardboard littered the street.

But Castle Street is wide, unlike the closed-in space of Hyde Street, which gives it less of a slum-like feel.

Everyone is young, mostly pakeha, and there to have a great time. There is an infectious comradery on the street. The residents say there is barely any violence in their neighbourhood.

I spotted a group of six boys in their backyard sharing some beers in the afternoon sun.

They are all second year students between 18 and 19 years old from different parts of the North Island who found a flat together after spending their first year in student halls.

The yard was covered with shards of glass and empty beer cans. It was worse inside.

He pretty much gave us a warning. He said we own a flat now so it’s our responsibility. What’s changed since then? A f**ken hole in the wall, that’s what changed!

Plates of leftover food covered the table and floor, the ceiling was sprayed with holes like someone has taken a machinegun to it, and there were more empty alcohol vessels lying around that could’ve possibly been consumed in a week.

They told me they came to Otago because it was “party central”.

“I worked 55 hour weeks for months before I came here,” said one of the flatmates who gave his name as "Speedy".

A main feature of the house is a gaping hole in the wall which the boys proudly pose next to like a prized piece of art.

One of the flatmates got out his phone and played a video of Max Lynch, a boisterous 18-year-old, running into the wall from the across the room, apparently celebrating a Black Caps win.

The six boys clearly love living there and the grottiness is like a badge of honour each one wears with great self-satisfaction. 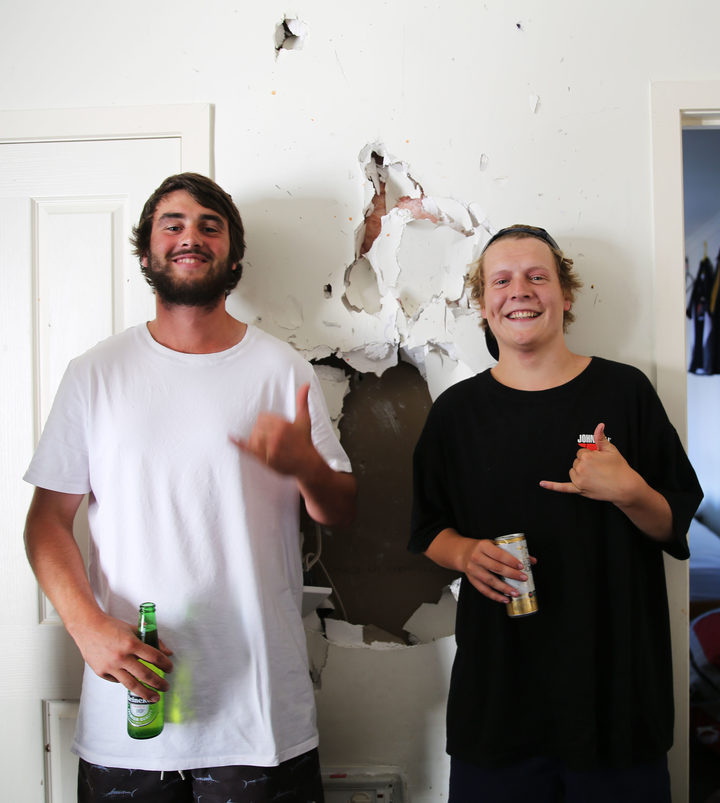 Max Lynch and Speedy pose next to a hole in their living room wall. Photo: Mava Moayyed/The Wireless

They all moved in about a month ago and were visited by the proctor on the first night after throwing a flat warming party. The proctor's office is responsible for dishing out punishment to students from the polytechnic and university.

“He pretty much gave us a warning. He said we own a flat now so it’s our responsibility. What’s changed since then? A f**ken hole in the wall, that’s what changed!” said Max.

The boys’ rooms were dark and damp. One had no windows, another had curtains covered in mould.

One of the flatmates wouldn't let me see his room and the boys said it's because it “smells like shit, literally”. He’s a biology student and was working on an experiment using manure, for some reason, in his room.

“We can show you a lot worse. A flat down the road has already had $5000 worth of fines and their landlord is about to kick them out,” said Speedy.

The boys of the Castle Street flat were welcoming and open, seemingly unaware of the ridiculousness of their surroundings, just psyched to be on “f**ken Castle Street!”

They personified the unique type of obnoxious lad-ism that I’ve always associated with “scarfie culture” punctuated by drinking, sports, and more drinking.

I was trying to process why a complete stranger would greet another person with sexual assault.

Although it seems it’s only cool to refer to being a “scarfie” ironically. Their dads were scarfies, not them.

While the Castle Street boys talked about the benefits of their lifestyle, a blonde boy staggered into the flat from across the street. All the properties seemed to have a kind of open door policy reminiscent of living in student halls where you can wander across the corridor to visit friends.

Before I could even catch his name, the boy started to gyrate against me as I stood in the middle of the lounge. The Castle Street boys roared with laughter.

The guy, who’d apparently been drinking for nine hours, went in for a kiss.

“Can someone please come get him off me!?” I said. I was trying to process why a complete stranger would greet another person with sexual assault.

Speedy got up but with no real urgency, half-heartedly putting himself between me and Humpy McKiss. “Why don’t you come over and interview me,” the boy slurred. “Don’t worry, I won’t rape you.”

I began to call out the idiocy of his comments but it just spurred him on. “What’s wrong with rape? I love rape”. He was a jester and his jokes were at my expense.

All the while, the Castle Street boys sat and laughed at every misogynistic remark the boy made. Things had got nasty and I hurried to pack up my equipment and go.

“Ah man, he’s really drunk,” chimed in one of the housemates.  “He’s been given a red card.”

According to an article in Critic, the red card is a kind of scarfie tradition where each member of a flat has the opportunity to “red card” a fellow housemate. When they “pull” their red card, the other person has to complete any challenge set. Alcohol is not mandatory but is often involved.

In 2013, a student reportedly came close to death after taking on red card challenges. He nearly choked on his vomit while drinking in a locked cupboard while another student with a heart problem spent a month in hospital after trying to complete a series of flat initiation drinking tasks.

The guy at Castle Street will no doubt shrug off his behaviour because he’d been drinking for hours making it hard for anyone to meaningfully confront what’s going on.

I’m certainly not suggesting it all starts in the streets on North Dunedin, or that all the students there are like that. I was on the street for only a few hours, but I wonder what the experiences of other young women in North Dunedin are?