Bach owner Jim Harre and his family have been coming to their west Auckland holiday spot for more than 40 years.

Others came before them; the property at Te Henga (Bethells Beach) has been there since 1934.

But according to Mr Harre, planned Treaty of Waitangi Settlement legislation would mean the building would become 'landlocked'. 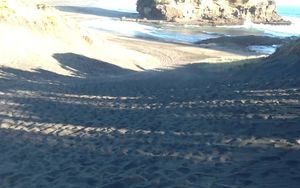 Te Kawerau a Maki is returning to the area and reclaiming some land, some of it shouldering the bach.

Of course, the iwi occupied the land long before people built seaside baches with spectacular views. But raiding northern Maori forces ran the tribe out of its rohe (area) and forced descendants into exile in Waikato. Colonials then swooped in and bought swathes of ancestral land.

Jim Harre says what is contentious here is not what the tribe is getting back, but instead the Crown's provision of access to his bach, as arranged through the Treaty negotiations.

"I support the settlement. I'm personally delighted that Te Kawerau a Maki are formally returning to Te Henga and will continue to be the tangata whenua in this area," he says.

"The first time we became aware of this settlement was August 2014, six months after the Crown has signed the settlement".

In an appeal to MPs on the Maori Affairs Select Committee, he goes on to say:

"[It is] disappointing that we were not able to have common sense input into formalising our access prior to the negotiators finalising a deal".

In reality, Mr Harre and his family will still be able to drive over the sand and spend time in their holiday home - certainly for now. But he complains the legislation would mean his access would be short-lived.

"The Crown negotiator is offering us an unregistered access easement for a limited duration on the basis that the sand and topography mean it is not amenable to normal surveyed legal access. No other reason has been given for denying us normal access. This is wrong".

Mr Harre also fears his taps at the bach could run dry in the coming years.

"The registered easement the Crown negotiator advised would be provided to us for water will now only be for a limited time frame, potentially up to 30 years. I do not believe that it is just or equitable for our water supply to be terminated at some time in the future".

Mr Harre points to what he considers to be inconsistencies in statute, which gives rights of way to other bach owners nearby, with one neighbour having a 'licence to occupy', which he says gives legal access to the properties.

He says the utility companies, such and telephone and power, have unlimited access under law governing their operations.

"My understanding of the Treaty settlement process is to address historic grievances not create new ones", he told the select committee.

Maori Affairs Select Committee chair Tutehounuku Korako responded by saying, "It's been an interesting one this one [submission]. It's been on our radar. And this is the process".

Although Te Kawerau a Maki has signed its Deed of Settlement with the Crown, the agreement is yet to become law.

In a statement to Te Manu Korihi, the Office of Treaty Settlements says the Crown is working through its Chief Crown Negotiator to ensure there is reasonable security of access for the landowners whose vehicle and utility access currently crosses a reserve that will be transferred to Te Kawerau a Maki.

"There is currently no authority for this access. By working with the landowners and Te Kawerau a Maki, the Crown intends to reach a sensible solution before legislation is enacted".