White Ferns captain Amy Satterthwaite says morale is still good, despite a losing start to the T20 World Cup in the Caribbean, going down to India by 34 runs. 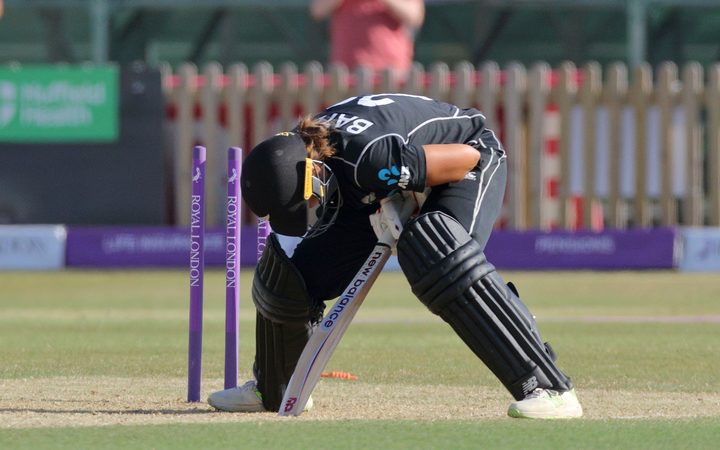 With the top-two from group B progressing to the semifinals, it will be Australia and India unless the Ferns can beat their trans-Tasman rivals, who beat them 3-0 across the Tasman last month.

Despite a string of losses Satterthwaite said team spirits were still good.

"Even though the results haven't probably gone our way, the girls are still in reasonable spirits. So it's obviously tough to keep it going if you're not winning, but I think we've got to keep believing in our ability. Otherwise it makes it really, it probably makes it harder to get up for games. I'm proud of the way the girls are holding themselves together and continuing to have that belief and it's something we've got to keep having."

After deciding to bat first India scored 194 for five from their 20 overs, the ninth highest score in women's internationals.

A year after knocking Australia out of the one-day World Cup semi-finals with a blistering 171, Kaur piled whacked an unbeaten 103 off just 51 balls.

Satterthwaite said they simply were outplayed.

"Harmanpreet's innings was obviously outstanding. But the disappointing thing to me is that we weren't executing our bowling plans. It just makes it really difficult to bowl against someone who is in form like that."

"We talked about how she [Harmanpreet] likes to play. I've obviously played with her in England so I've certainly seen how she can hit the ball. We talked about what was required, but like I said I don't think we executed that a lot of the time."

In reply the White Ferns started well with Suzie Bates and Sophie Devine putting on 52 for the first wicket, but they were unable to keep up with the run rate as they lost regular wickets.

Bates made 67, while Katey Martin scored 39. The White Ferns finished their 20 overs on 160 for nine.

Satterthwaite said there were positives.

"When you are chasing 194, you know you need a really special innings. And unfortunately we didn't get that today. I thought Suzie was outstanding at the top. And to be fair, taking the total out of it, I thought we actually batted all right in patches and showed some real intent and improvement from previous games."

Satterthwaite knows the next game is a must win.

"I think every game is a must-win. We knew that coming into this tournament, we talked about it yesterday, how important today was. But equally if you want to be able to lift the trophy, you've got to win games of cricket. We haven't had the best start but it's still early days and we know we've still got an opportunity."

Harmanpreet is just the 10th player to score a century in a T20 international and Satterthwaite rated her innings as one of the best in Women's T20.

"Obviously I've been fortunate enough to see some pretty special innings from the likes of Suzie Bates and Sophie Devine. I'd say it was right up there. Her striking was outstanding and her ability to clear the boundary is something that's pretty unique in a way."