Captain Roger Tuivasa-Sheck has been named the Warriors NRL Player of the Year for the second season running. 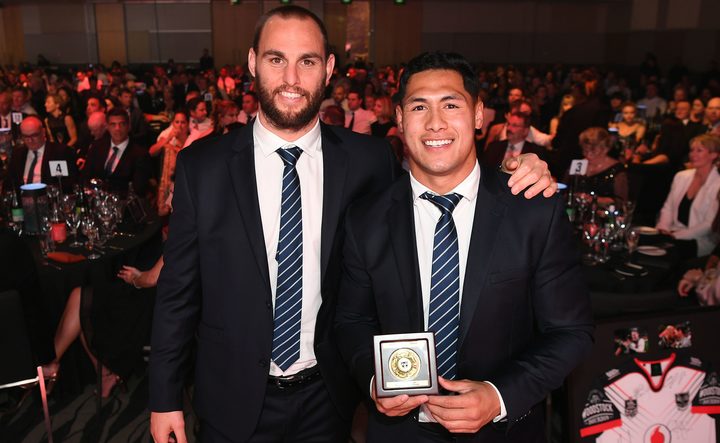 He becomes the inaugural winner of the Simon Mannering Medal, announced in honour of the retiring club legend who made his 300th NRL appearance on Friday night.

Tuivasa-Sheck is just the fourth player to win the supreme accolade more than once following five-times winner Simon Mannering and Steve Price and Ben Matulino, who were two-time winners.

The fullback also collected the People's Choice Award voted on by the public.

After being re-signed for four years just before the season started, the Kiwi international has led the Vodafone Warriors to the NRL play-offs for the first time since 2011. They ended their regular season campaign with a 20-16 victory over Canberra on Friday night to finish with a 15-9 win-loss record, the second-equal best record in the club's history.

Throughout the season, Tuivasa-Sheck has been in imperious form, appearing in 22 of the club's 24 matches.

He has made a total of 4058 metres (fourth-best among all players), averaging 184 metres a game including 1093 post-contact metres. In the 23rd-round clash against Newcastle, Tuivasa-Sheck made 338 metres.

He is first among all players for most kick return metres (1330) and fifth for most tackle breaks (109).

Tuivasa-Sheck is also a top contender for the Dally M Award for the NRL's player of the year to be named later this month ahead of the grand final.

The other nominees for the Player of the Year title were Agnatius Paasi, Issac Luke, Jazz Tevaga and Ken Maumalo.

The Warriors NRL Rookie of the Year is Isaiah Papali'i while Blake Green is the Clubman of the Year.