Opinion - If you haven't seen the clip of Silver Ferns skipper Katrina Grant being reduced to tears yet, brace yourself. It's not an easy watch. In the world of the standard soundbite she showed more than any sort of prepared statement ever could, and proved that a team under fire still cares deeply about what their uniform represents. 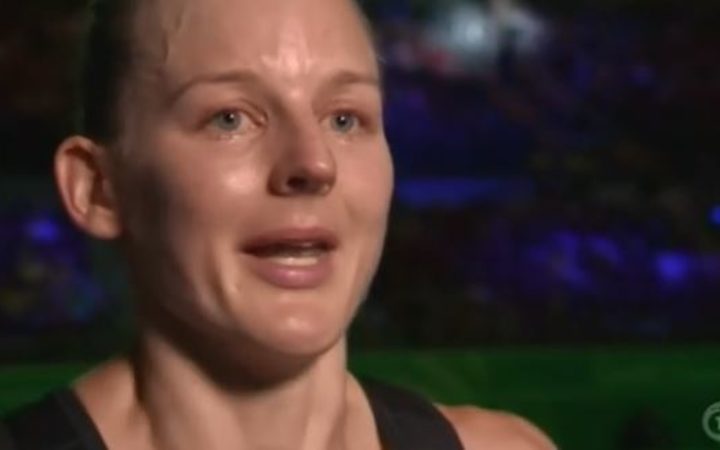 Silver Ferns skipper Katrina Grant broke down in tears when being interviewed by TVNZ reporter Jenny-May Clarkson. Photo: A screengrab from TVNZ

No one likes to see anyone in pain, but it was all there for everyone to see at around lunchtime yesterday after the 54-45 loss to England. TVNZ reporter Jenny-May Clarkson had already shown that she wasn't afraid to ask some tough questions, grilling Janine Southby around whether she should keep her job as coach.

It was quite a contrast. Southby's answers were textbook: 'Look, at the end of the day…', 'obviously disappointed' and 'moving forward'. The sort of verbal diarrhea that makes you distrust politicians and tune out in pointless meetings.

However, from the outset, it was clear that this wasn't just going to another interview when it was Grant's turn. Her voice was full of emotion, and it wasn't going to take much for her to break down. Clarkson, herself a former Silver Fern and therefore being in a better position to be able to ask one of the biggest questions ever posed to a national captain, didn't let it daunt her from going there, though.

The question of whether the Silver Ferns still had enough desire and pride in the black dress hit Grant like a ton of bricks. She cracked, then broke. It was too much for her as she turned away sobbing from the camera, leaving Clarkson to conclude the piece with a look of stoic sympathy on her face.

Sympathy because she's been there before, which is why she was the best person to have in that position. She could've asked her about the other issues involved with the team, like the baffling substitutions that have caused even the most casual viewer to scratch their heads. But Clarkson knew that would only illicit another non-answer from an athlete who would never throw her coach under a bus, no matter how bad the loss.

Of course, the irony of all this is that this perfect moment of raw journalism came when TVNZ are defending themselves on a daily basis for their interruption-laden Games coverage. Clarkson at least proved that putting her on the job was worth the wait through yet another ad break.

There are more serious questions to be asked of the Ferns and their terrible record lately. But they weren't ever going to be answered in a quick post-match interview, and anyone who has a decent knowledge of the game already knows what the answers are, anyway.

The loss was, unfortunately, another unwanted piece of history. It was the first against England at the Commonwealth Games, and means that there will be no showdown with Australia in the gold medal match for the first time ever. It's entirely possible that the Silver Ferns may not come home with a medal at all.

Bashing the Silver Ferns' wretched form and questionable decisions has been easy journalistic fodder over the last year, and those headlines will continue. However, they'd be an awful lot worse if the only quotes we got after the English loss were along the lines of Janine Southby's.

Instead what we got was the perfect question, and Katrina Grant's reaction was the perfect answer. The gut-wrenching sight of someone breaking like that most definitely banished any doubts over whether Grant, or indeed the entire Silver Ferns team, had committed the most cardinal sin in sports: not caring.