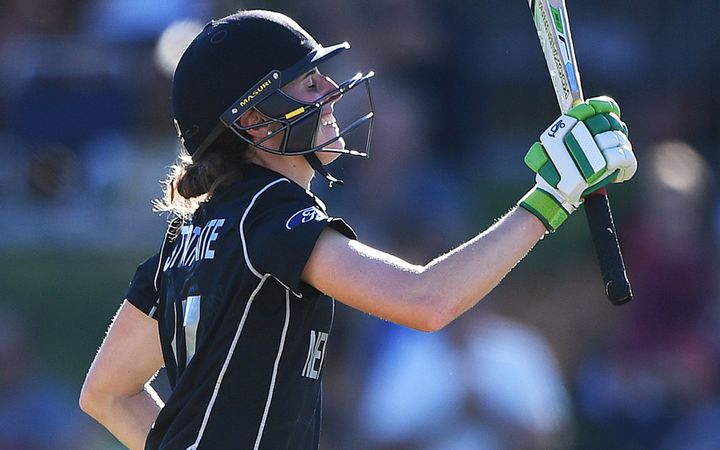 The pair scored 124 runs from 73 balls for the third wicket as the White Ferns posted an imposing total of 185-3 from their 20 overs under the lights at Bay Oval.

The stand is the highest between any New Zealand women's internationals in T20 history and it's also the second highest from any country.

It only took Martin and Satterthwaite 32 deliveries to bring up a fifty run partnership as the hosts ticked over the 100 run mark in the 13th over.

Satterthwaite hit six fours and two sixes en route to a half century off just 28 deliveries before Martin scored her second straight fifty from 35 balls.

The milestones were falling as quickly as the runs were flowing as the pair raced past the 100 run partnership off 57 balls before surpassing the mark set by Suzie Bates and Aimee Watkins for the highest partnership by a White Ferns duo in a T20.

Martin was unlucky to pick out Stafanie Taylor at cover in the final over as Satterthwaite guided the hosts through to 185-3.

The bowlers then backed up the efforts of Martin and Satterthwaite by taking four wickets within the first five overs to limit the T20 world champions to 79-8.

Sophie Devine managed a second wicket in her first over to leave the Windies 30-4.

The tourists never recovered as the White Ferns kept it super tight as Suzie Bates rotated her bowlers to great effect.

Leigh Kasperek got among the wickets with the dismissal of Merissa Aguilleira (16) and Britney Cooper (5) while fellow spinner Amelia Kerr kept it tight at the other end.

Devine picked up a third before debutant Kate Heffernan capped off a great night out with her first international wicket.

The five-match series moves to New Plymouth for game three on Tuesday.