The All Whites have drawn one-all with the United States in their football international in Washington DC.

The All Whites created several first-half opportunities but the US scored first through Julian Green, who blasted a shot from outside the penalty box past the near post of keeper Stefan Marinovic, who had his vision blocked and was left flat-footed. 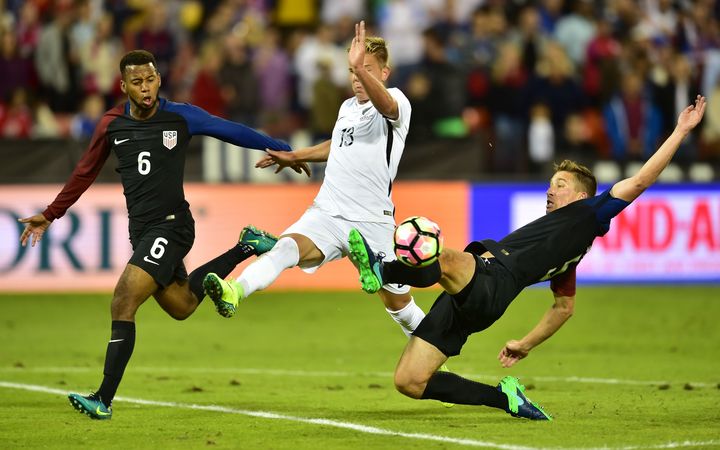 The All Whites Monty Patterson contests possession against the United States in Washington DC. Photo: Photosport

The All Whites did not play with as much control as they did in their 2-1 loss to Mexico at the weekend but they battled throughout the match.

The equaliser came from a corner midway through the second half when Monty Patterson's shot deflected off an American defender and into goal.

The All Whites, ranked 88th in the world, sensed an upset against the 22nd-ranked Americans and the injection of Kosta Barbarouses energised the New Zealand side.

While the tourists tested the home side, however, they were unable to break the deadlock.

Coach Anthony Hudson was again delighted with the performance of his players and was pleased to see them back up so strongly after a similar display against Mexico.

"Up until the goal in the first half, I thought we were the better team," he said.

"We lacked a bit of energy later on in the first half which was possibly the result of playing Mexico a few days ago. That was a really tough game and we worked really hard."

Hudson felt the All Whites raised their intensity again in the second spell and could well have taken more than a draw out of the contest.

"In the second half, I think we were the team that really went to try and win the game. Overall, it was a really good performance and I think there's some players who are a little bit disappointed we didn't win the game. To come to the USA, play two games away from home and be disappointed we didn't get wins is a huge credit to the team," he said.

"We were unlucky not to get a draw against Mexico because I felt we were the better team and I thought the same tonight. We had a lot of chances and corner after corner at the end there. In two games on this tour, we've played against two very good teams and learned a lot about our squad. We've still got a long way to go but we're certainly moving in the right direction."

The All Whites will regroup in early November in Auckland as they look to take their next steps on the 'Road to Russia'.