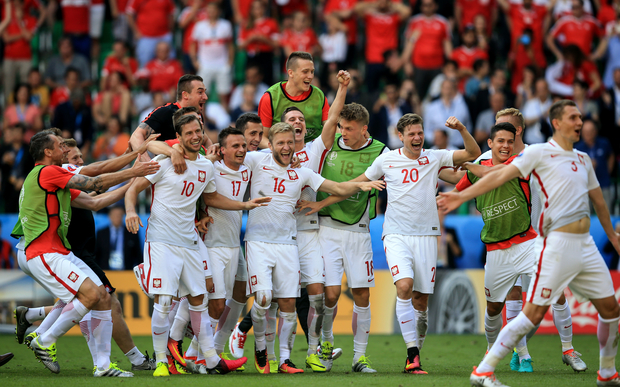 Poland players celebrate their win on penalties over Switzerland at Euro 2016 Photo: PHOTOSPORT

The football public is split on shootouts, which have been described as "like a public flogging in the market square" and "a thrilling culmination to a cut and thrust game of football".

Critics, who include former long-reigning FIFA presideent Sepp Blatter, claim a shootout is a lottery that reduces major matches to a game of chance.

In the Copa America tournament last month, Chile beat Argentina in the final on penalties after a scoreless match.

Euro 2016 is in its final stages. There have already been three shootouts. In the round of 16, Poland got past Switzerland on penalties. However, in the quarter-finals, the Poles lost to Portugal and Germany beat Italy, both on penalties.

Some teams seem psychologically unprepared for penalty shootouts. In major tournaments, England have won only one of seven - a 14 percent success record. France and Italy are shaky - each has a 3-5 win-loss record.

Argentina and Brazil have each won seven and lost five. The stoic Germans stand tallest in shootouts, having won six of seven.

Before shootouts were introduced, drawn knockout matches were often decided by drawing lots (that's how the Republic of Ireland and the Netherlands were separated at the 1990 World Cup) or a coin toss.

Penalty shootouts were first held in World Cup finals in Spain in 1982.

I intended to show that shootouts are becoming more prevalent - weaker teams play defensively to get a draw and earn a shootout. However, the facts don't bear me out. There were two shootouts in the 1982 World Cup, then three, four, three, three, two, four, two and four at subsequent World Cups.

Shootout rules preclude goalkeepers from moving off their line when defending a penalty in a shootout, but goalies still use psychological ploys.

One famous example was celebrated Liverpool keeper Bruce Grobbleaar's antics during the European Cup final shootout against Roma in Rome in 1984.

Before the first kick of the shootout, Grobbleaar walked to the netting and pretended to eat it, as if it was spaghetti. Later, he went wobbly-kneed awaiting a kick, as if sagging with nerves.

His gamesmanship paid off - Liverpool won the shootout 4-2.

Lots of sports wrestle with how to decide a drawn or tied match.

In some basketball competitions there is a round of free throws. Twenty20 cricket has a Super Over. Ice hockey has penalty shots. Field hockey had penalty flicks, and has now introduced the penalty shuffle, where the striker dribbles the ball towards the goalkeeper and has to shoot within eight seconds. (The New Zealand women's hockey team has lost critical Commonwealth Games and Olympic penalty shootouts in recent years.)

Handball and water polo have penalty shots, softball and baseball sometimes hold a "home run derby" and some rugby matches, such as at Heineken Cup level in Europe, have been decided by kicks from the 22-metre line. Five kickers from each team are involved.

As for football, alternative methods to the penalty shootout have been suggested, including counting shots at goal, corners, yellow and/or red cards and even playing more extra time with players being removed from each side until a goal is scored.

I favour the penalty shootout. Sure, it's not a true test of all that football involves, but it's better than the other suggestions and for drama and excitement, it simply can't be beaten.

The pressure on the kicker, more so than the goalie, is immense. That goalmouth must seem very small for penalty takers in major tournament finals with 90,000 people watching and the hopes of a nation on their shoulders.