Real Madrid suffered their first defeat in the Champions League this season when they were stunned 2-0 at VfL Wolfsburg in their quarter-final first leg in Germany. 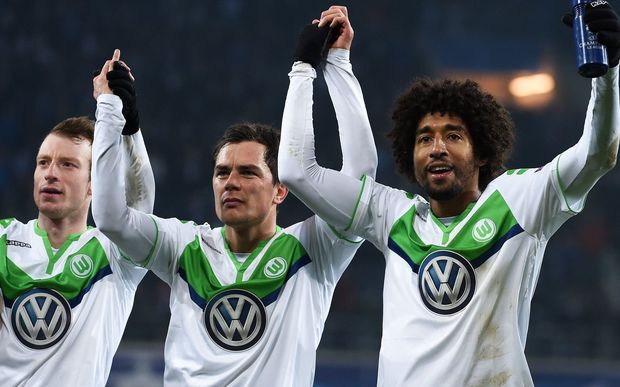 Wolfsburg were celebrating a memorable last-eight debut after Ricardo Rodriguez's penalty in the 18th minute and Maximilian Arnold's strike in the 25th stunned the visitors only four days after their 'El Clasico' win in Spain over Barcelona.

Despite making just one change to the line-up that started against Barca, Real coach Zinedine Zidane's team will now go into the return leg in Madrid next week with a clear disadvantage.

The Spaniards, who also watched Karim Benzema limp off with a foot injury in the 40th minute, enjoyed a strong start but never recovered from the quick two-goal strike by the Wolves and were lucky not to have conceded a third in the second half.

"It was a breath-taking atmosphere and the fans carried us to this win," Arnold told ZDF television.

"But we should keep calm. We did the 50 percent now we need to do the other 50 percent in Madrid where we must most likely play even better. But it still a great win. I will sleep very well tonight."

Chasing a record-extending 11th European crown, Real needed only 90 seconds to put the ball in the net but Cristiano Ronaldo's effort was ruled offside.

They kept up the pressure and Frenchman Benzema came close minutes later when his shot was blocked by Wolfsburg's Diego Benaglio.

But the hosts were awarded an unexpected penalty when Andre Schuerrle went down in the box in a challenge with Casemiro.

Wolfsburg struck again seven minutes later with Arnold, who had earlier threatened with a 70-metre sprint, slid in to complete a superb passing move that left the Real backline dazed.

Things got even worse with Benzema taken off minutes before the break and Real struggling to develop any traction in their attacking game in the second half.

Ronaldo was also denied by Benaglio in their one-on-one in the 70th as Real grew more desperate, pouring forward in search of a goal.

Wolfsburg lurked on the break and although Schuerrle twice failed to score despite racing clear, it did not prevent the German's from celebrating a memorable win.

Real will host the second leg next Wednesday (NZ time).