Brathwaite was the name on everyone's lips in Kolkata after belting West Indies to victory in the World T20 final at Eden Gardens.

West Indies needed 19 runs from the final over against England when Brathwaite stepped up in stunning fashion.

The allrounder, who had totalled 23 runs in the tournament prior to his final knock, clubbed four consecutive sixes off Ben Stokes. 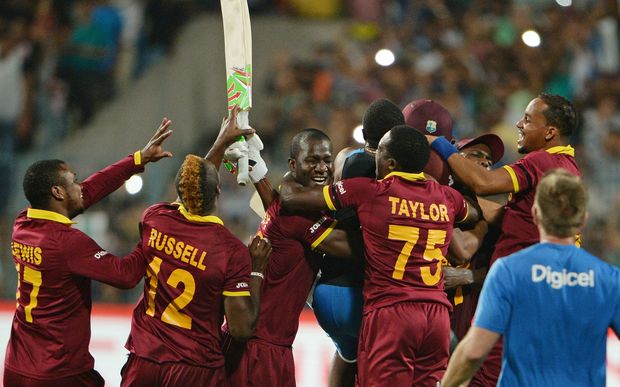 It was a performance that would have caught the eye of every T20 franchise in existence, including the eight BBL clubs.

"Well hopefully. That's also a dream," Brathwaite said of the BBL after a wild night of celebrations.

"Once the franchises are interested and once Test cricket or international cricket (schedules) allow then I'm available.

Brathwaite, who was one of few West Indies players to show promise during the 2015-16 Test series in Australia, played alongside David Hussey at Antigua Hawksbills during the Caribbean Premier League.

Melbourne Stars skipper Hussey gauged his interest in the BBL but nothing has come of it yet.

"David Hussey has been speaking to me since we played together at the Hawksbills," Brathwaite said.

"I don't think it's ever quite materialised but congrats to him as well with Melbourne, the job he's been doing with them."

Brathwaite revealed he had a simple conversation with batting partner Marlon Samuels prior to the final over of the World T20 decider.

"Ben got it wrong on a couple of occasions but he's a top lad, top bloke. A legend in his own right.

"Thankfully ... it was my night and I brought it home for the team."

Support for West Indies has come from around the world and a diverse range of sources over the past month, with Usain Bolt among their most high-profile backers.

Brathwaite has been blown away with the response since he struck the winning six.

"I don't think it's quite sunk in as yet but happy to start the celebrations with the boys."