All Blacks Sam Cane and Aaron Cruden will co-captain the Chiefs for the 2016 Super Rugby season. 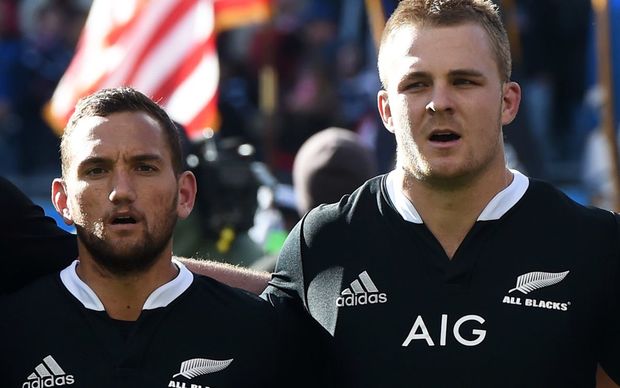 All Blacks Sam Cane and Aaron Cruden will co-captain the Chiefs for the 2016 Super Rugby season. Photo: PHOTOSPORT

Loose forward Cane, the heir apparent to Richie McCaw's All Blacks openside throne, made his Super Rugby debut for the Chiefs in 2011.

First-five Cruden moved north from the Hurricanes to join the Chiefs in 2012.

To date, the duo have amassed a combined 121 caps for the two-time Super Rugby champions.

The Chiefs head coach Dave Rennie said the appointment of the pair as co-captains allowed them to share the significant workload the captaincy involves.

"Sharing the captaincy and the accompanying workload between two proud Chiefs men in Sam and Aaron makes a lot of sense. They're both bloody good players and quality men, who set high expectations and demand the best from their team-mates both on and off the field.

"Having Aaron here during the preseason to train alongside the new boys has given him the opportunity to connect with them and also empathise with how hard they've been working. Sam is back training this week inspired and determined, having had a decent break to regenerate following his impressive 2015 year with the Chiefs and All Blacks" said Rennie.

Cruden shared his excitement about his return to rugby following a lengthy injury break.

"I'm really excited to be back training and in the Chiefs environment after such a long injury layoff.

"It's nice to be running around again and getting to know the new men in the squad. I've been really impressed with the work ethic of the whole group during preseason and I'm looking forward to leading this team with Sam in 2016 and hopefully through our hard work, bringing another title back to the Chiefs region."

Cane said, "It's been nice to physically and mentally recharge the batteries after a memorable 2015. Growing up in this region and being a Chiefs supporter from a young age it's a huge honour to lead the 2016 Chiefs with Aaron.

It's a challenge I'm really looking forward to and am excited about. We've got a great mix of youth and experience in the squad and a lot of great leaders within the group who will support us and share the workload".

Cruden co-captained the Chiefs alongside Liam Messam in 2014.

Prior to that, he captained the New Zealand Under-20 team to a world title in 2009 and captained his home province Manawatu in the national provincial competition at just 20-years-old.

The first five-eighth has 280 Test points and 37 caps to his name for the All Blacks and has played 56 games for the Chiefs.

Cane's leadership abilities were highlighted in 2015 when the 23-year-old captained the All Blacks against Namibia in their second pool game of the Rugby World Cup.

It was a natural progression for the young flanker having been involved in the All Blacks leadership group since 2013.

It also won't be his first time at the helm for the Chiefs, in 2015 he captained the team against the Highlanders in the absence of regular captain Liam Messam.

The Reporoa-born loose-forward has accrued 50 Test points and 30 caps for the All Blacks and has played 65 games for the Chiefs.

The Chiefs take on the South African side the Lions in their first home game of the 2016 Super Rugby competition on Saturday the 5th of March in Hamilton.